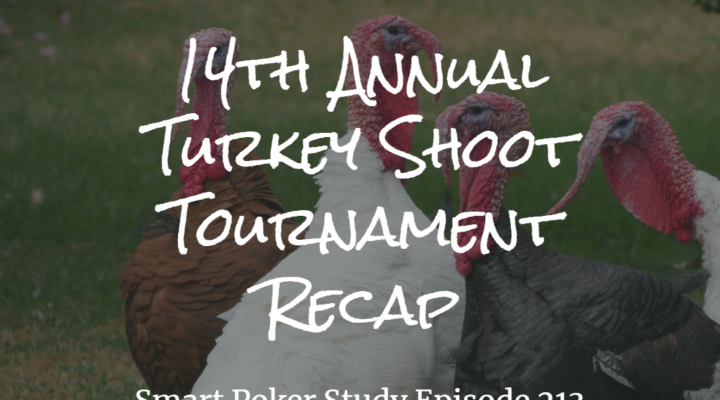 In this episode, I give a tournament recap and discuss my profitable results from playing in the 14th Annual Turkey Shoot tournament.

In episode 212, I discussed my Turkey Shoot tournament preparations.  Listen to that one before you listen to this one.

No suspense… I chopped it 4 ways for a nice profit.

I had won this tournament one time outright in the past, and chopped it heads up once as well. Chopping this time earned us each slightly less than 2nd place money.

At the time of the chop I was in 4th place with about 5 bb’s. The next bigger stack had 7 bb’s, 2nd place had about 10-12 bb’s, and the person with the biggest chip stack, Joe, had roughly 20 bb’s. With the stacks being so short, it was kind of a crapshoot and if I doubled-up against any of them, the person I doubled through would take quite a hit.

We were all pretty eager to chop, but Joe didn’t want to do an even chop. We each gave him $50 so he had a very good payday. I was good with this, and I didn’t bother to try to run any ICM chopping numbers. We’re all buddies and I’m not going to fight for every scrap of value I can. I’m sure a lot of non-chopping advocates would say I made a huge mistake here, but so be it.

The levels were worse than I remembered from last year.

Yes, you heard that right, 15-minute levels. The reason for the quick levels is this casino really wanted us out of there. There’s a Fresno law that tells the casino how many tables they can have going at any one time. So, for a 3-table tournament, they had a 3 less cash games going which means 3 less tables earning them rake with every hand dealt.

And, the crazy thing is at level 9 after the 2nd break, the antes kicked-in and the levels dropped to 10 minutes.

The hand that earned me a ton of chips was when I completed in the SB with 93s.  Flop came K99 and my opponent lost it all to me on the turn with his AK.

I’m not remembering all of these #’s and hands from memory.  I was using Evernote to record the blinds and my chip stack at the start of every level.

I had a ton of fun in this tournament. Every one of these guys is really cool, with some of them super talkative and funny and other ones quiet like me, but willing to laugh and have fun. I really enjoy this tournament more than any other one I play in.

Here’s the back of the shirt I got for cashing: 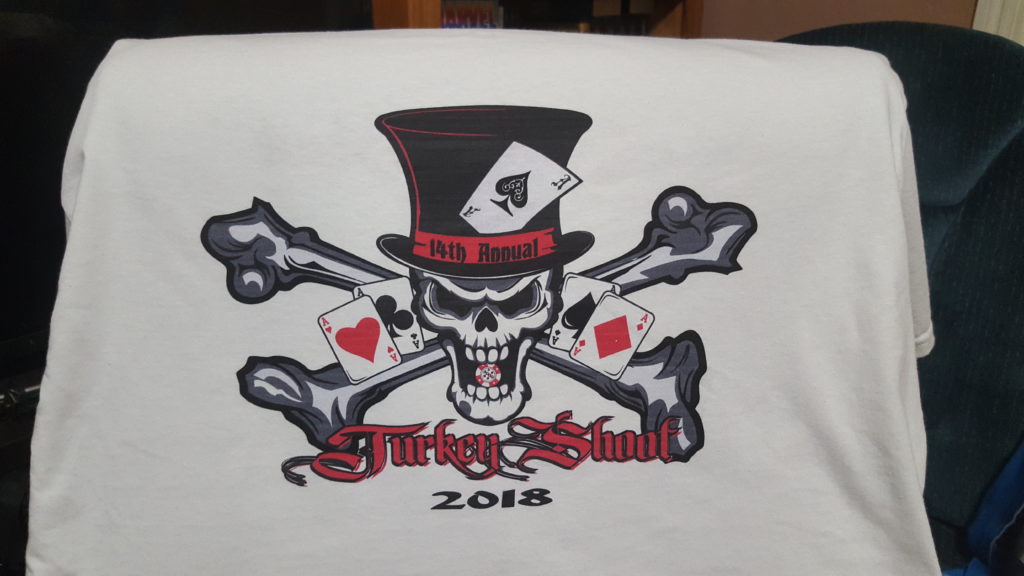 Here are the final results of my online SNG practice leading up to the tourney:

I know this is a small sample, but results like these make me want to play more online SNG’s.

A fun little story: I accidentally registered for a PLO tournament one hour before the Turkey Shoot. I still had to take my dogs for a walk and get dinner ready for my boys. So, I let the first few levels run while I did that. I came back to the tournament about 12 minutes later and there were already 4 people knocked out.  My starting stack was down to 1300 from 1500. I didn’t play a single hand and I was already finishing better than 4 other players.

I then started getting dinner ready for the boys while I went back and forth between my computer in the kitchen. And I got lucky enough to make the money and get knocked out in 3rd place. That felt really good.

Check out the best online sites for tournaments.

This hand is from the first level of the tournament with 100/100 blinds. I was in the small blind with KJs. There were 4 limpers ahead of me and I wasn’t going to let them see it cheaply.

I made the isolation raise to 8 bb’s.

The BTN to my direct right was the only caller. He had just arrived to the table about 4 hands into the game. I didn’t know anything about him but he did have a drink in his hand, and I love seeing my opponents holding alcohol.

The flop came J83. I flopped TPKK and made the OOP cbet.

This unknown player jammed his entire stack (maybe 75bb’s) and I had him covered. I thought it was possible that he could’ve limp/called preflop with a better hand like AJ or 88 or 33. But I also thought he could be making this play with weaker Jacks, an open-ended straight draw or some gut shot draw like QT.  It could’ve even been an Ace-high bluff. Maybe like a suited Ace with backdoor flush draw potential.

I thought about it for maybe 5 seconds, and then I made the call. He turned over 55 for a total bluff. My top pair held and he was KO’d from the tournament. He was the last one to sit down and the first to leave.

That was a killer start in the very first level.

I won a lot of pots with small and medium pairs. I also flopped a full house, rivered a flush, and I was dealt KK once and AA twice. It was cool winning all of those hands and knocking out a few people in the process.

I also won a lot of small pots by being the preflop raiser and throwing out a simple cbet. I had a good read on most of the opponents at each of my tables and I knew who was loose and who was tight.

On that very first table I was seated next to Joe who is a very tight player. I knew this from playing with him in prior years, but it was apparent that he was still tight because of all of his folding. I should’ve remembered his tightness when I played this next hand and lost half my stack.

At level 9 I had 77,600 chips and the blinds were 1,500/3,000 with no ante. I had a hefty 26 BB stack. The next biggest stack had roughly 30,000 chips at the start of the level. This next hand took place towards the end of the level. I think I may have been a little giddy due to my big stack size, and I think I was on a little bit of winner’s tilt because I’d been so lucky and won so many pots up to that point.

1. Always factor the tournament situation into your decision.

We were so close to the final table, that a lot of the bigger stacks were playing tight in hopes of making it there. Joe was the 2nd biggest stack at the table behind me. I didn’t take this into account, the fact that Joe wanting to survive would really constrict his shoving range especially with the big stack still to act.

This is something that I’ve done in prior tournaments as well; I forget about the situation I’m in and I just think about my opponent, their range and my hand. Sometimes I forget to factor in how my opponent will adjust their range or their play based on the situation.

Immediately after the hand I realize this and I knew I made a mistake.

This is going to be a focus for my next LIVE tournament.

2. Inexperienced players telegraph their hand strength with their bet size.

In the last episode, part of my plan was to believe my opponent’s post-flop bets and raises. There were a couple times when I faced a small post-flop bet, and that told me my opponent was making a blocking bet or a cheap bluff. But at those times, I didn’t have a hand worthy of calling with showdown value. But I also didn’t pull the trigger on a raise that I’m sure would’ve earned the pot. I just did a lot of folding in these instances.

Looking at the results, I’m glad I folded these hands because I ended up chopping it for some profit. But just looking back at the plays I made, I know that if I had bluff raised, I would’ve won those pots, so I missed out on some +EV aggressive plays.

Here’s my challenge to you for this episode:  If you haven’t played in a live local tournament in a while (or ever), then what are you waiting for? Your tables will be full of weaker players who are quite easy to play against. Whether they’re too passive or too aggressive, you know how to exploit them. Give it a shot and see if you can’t have some fun and earn yourself a nice payday on the LIVE felt.

So many Black Friday/Cyber Monday supporters this past week!  I appreciate each of you so much.  Thanks!!!

Getting the Most from PokerTracker 4 Webinar: Kaye Gough, Benjamin Wiater, Keith Pfeifle, Lewis Sterling and Halfday