I share my 3 favorite Smart HUD exploits by telling you exactly what to look for with 3 perfect example hands. And, I break it down so non-HUD and LIVE players will also be able to use these exploits.

Let's get you more profitable with the Smart HUD for PokerTracker 4.

Listen to the podcast as you follow along below:

The best HUD exploits are at the extremes and at huge tendency changes.

Simple Example: FantasticBob’s 3bet is 3% in every position but jumps to 12% on the BTN >>> you know that Bob loves to 3bet bluff from the BTN.

2 simple exploits you can use against him:

The 3 example hands below will show you how I use extreme percentages and changes in tendency to pull the trigger on chip earning exploits.

#1 Favorite Smart HUD Exploit: 3bet Bluffing with Anything Playable at the Right Time

Non-HUD Signs: Players who open-raise a lot from their position but are capable of folding to 3bets. So, you've seen them fold versus 3bets in the past. Once is good, twice or more is much better.

Additional Help: It helps if they Fold to Flop Cbet a lot as well, which gives you another way to earn the pot if they call your 3bet.

Example Hand: 98s in CO versus a LAG opener: 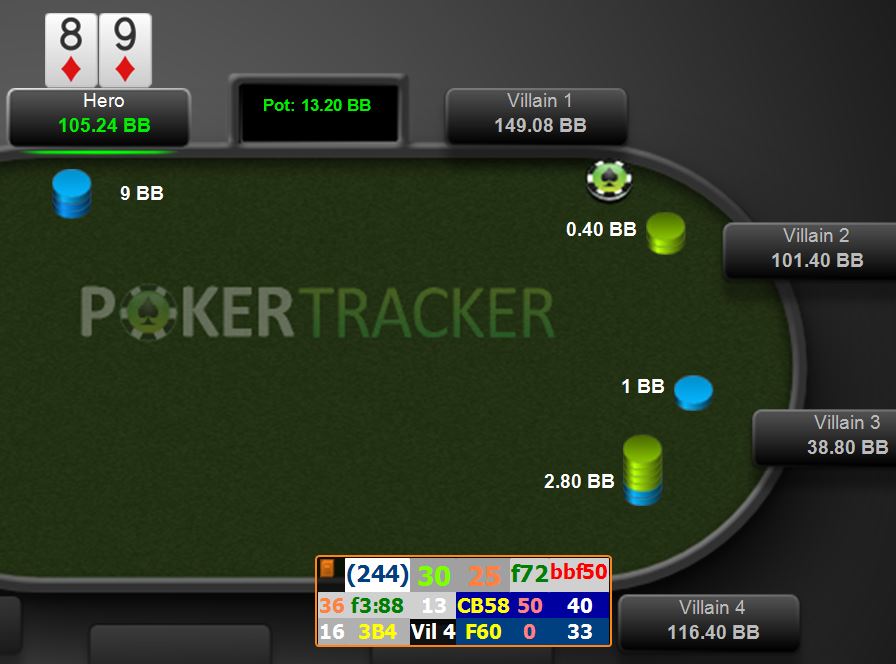 You don't have to be IP, but having position makes your bluff more likely to succeed because they know if they call, they'll be OOP in a 3bet pot for the next 3 streets.

Additionally, with a big stack, they have more to lose and you can barrel them off the hand at some point if they call your 3bet and you don't hit the flop.

The reason we want a playable hand is because he might call and we’ll see the flop. It’s so much better seeing the flop with a hand like 98s instead of A6o or K9o or J7s.

Watch me review these 3 sample hands:

HUD Signs to Look For: A big increase in Fold to Cbet from the Flop to the Turn, something like 33% to 67%.

Non-HUD Signs: A player who doesn't fold on the flop because they think you're bluffing, but folds a lot on the turn because now they know you mean business. Maybe they themselves only bet the turn with a good hand and check all the time (we'll exploit this with the 3rd exploit below). 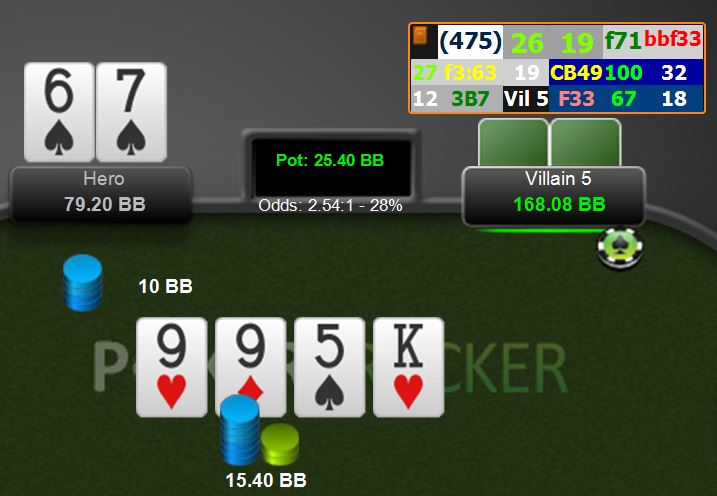 This is our 17th hand and we’re looking very nitty at 7/7 so far. We open in the CO with 76s and a LAG Villain calls on the BTN. His 3bet is 7% total, so he doesn’t have TT+ nor AK maybe not even AQ. His Fold to Flop Cbet is 33% and his Fold to Turn Cbet is 67%. So, he doesn’t fold flops, but he folds on the turn. Of course, our plan is to double-barrel bluff him. Firing only on the flop would be a huge mistake here. After Villain calls, the blinds fold and the flop comes 995. We hold a gut shot + back-door flush draw. We cbet 4bb into the 7.4bb pot and Villain calls as expected. The turn comes an off-suit King, so we fire the double barrel of 10bb into the 15.4bb pot and take it down.

This easy to spot double-barrel bluff earned us 8.4bb’s. Again, if we can find these opportunities just once every 100 hands, our win rate will jump by 8.4bb’s.

The key is finding the street they're most honest on and being willing to bet on that street. An interesting thing to note is his Fold to River Bet at 18% being a huge decrease after folding on the turn 67%. He totally makes his mind about the rest of the hand on the turn so this is the street you MUST bet on if you're going to try to bluff him off. A 1-and-done flop cbet is just a waste if you don't pull the trigger on the turn.

Non-HUD Signs: A player who raises a lot preflop, cbets the flop a lot but fails to cbet again on the turn. These players get to the flop with a wide and weak range, miss the flop but throw out one bluff, then give up the aggression on the turn by checking. 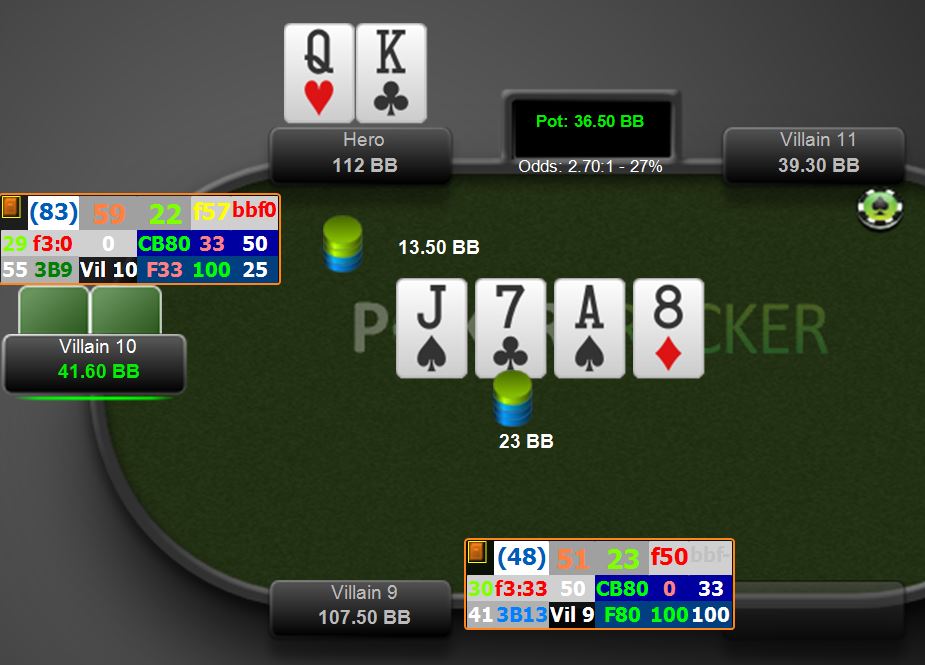 We’re a TAG player at 14/12 over 78 hands. We open to 3bb in the KO with KQo, the BTN folds, the Maniac SB calls then another Maniac in the BB makes a min-3bet to 5bb. We see his Flop Cbet is at 80% but drops drastically to 33% on the turn. He’s a one-and-done cbettor! We call with the plan of exploiting this and the SB calls as well. The flop comes AJ7 giving us a gut shot draw. The SB checks and the BB 3bettor now cbets only 4bb’s into the 15bb pot. Anyone else smell weakness? We call and the SB folds. The turn is 8d (AJ78 board) and Villain, as expected checks. We fire 13.5bb into the 23bb pot and he folds. Lovely result, our plan worked perfectly.

This one play netted us a profit of 14bb’s. This pads our win rate nicely.

When you find a player like this, it's your job to call them preflop when you have position, then call again on the flop in order to bet when they check the turn.

I didn't 4bet bluff him even though I sensed weakness because look at that tiny stack and maniac 59/22 stats with a 9% 3bet. This is the kind of player who is likely to say “screw it” and call with anything just to try and bust your hand. It might be something playable like JTs or A5s, or even something NOT playable like J8o but he just wants to crack this jerk who 4bet him. 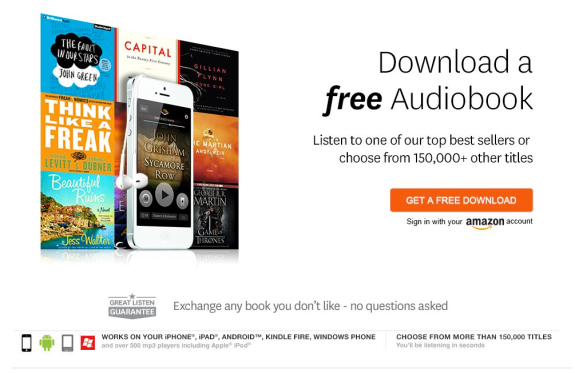 Terry Klann, Ryhawkswitch, Brian Gartman, Cedric Ponchy, Hunther and Derrick Hansen bought the Smart HUD with a 1.5 hour webinar for PokerTracker 4.  It’s the best online poker HUD in the business! 16 elements in the HUD and 7 custom popups. This is what every online player needs to maximally exploit opponents.