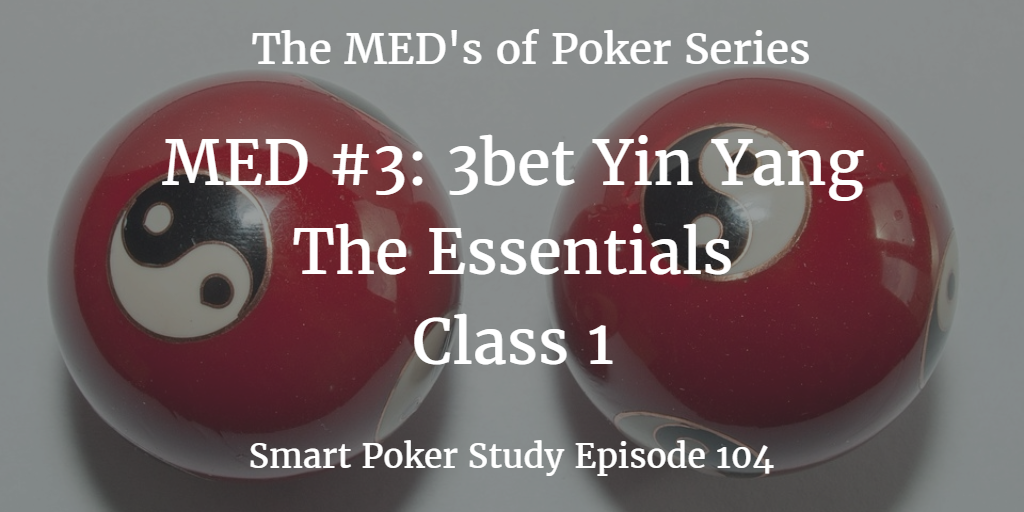 In this episode, discuss the reasons to 3bet instead of calling or folding, and 4 important points to consider before making a profitable 3bet.

In episode #102, I concluded my MED series on blind stealing and I covered the consequences of stealing more often, but I also helped you turn those into benefits.

Yin / Yang : Two halves that together complete wholeness. Yin and yang are also the starting point for change. When something is whole, by definition it is unchanging and complete. So when you split something into two halves – yin / yang, it upsets the equilibrium of wholeness. This starts both halves chasing after each other as they seek a new balance with each other.

While planning this MED, it occurred to me that there really are two very important parts to 3betting:

They’re two halves of a whole.  You shouldn’t study making 3bets without diving into how to defend against them.

And, there’s a yin yang for making 3bets as well as defending against them:

So, that’s what this 3rd MED on 3betting is all about, understanding both important halves of this crucial poker aspect. 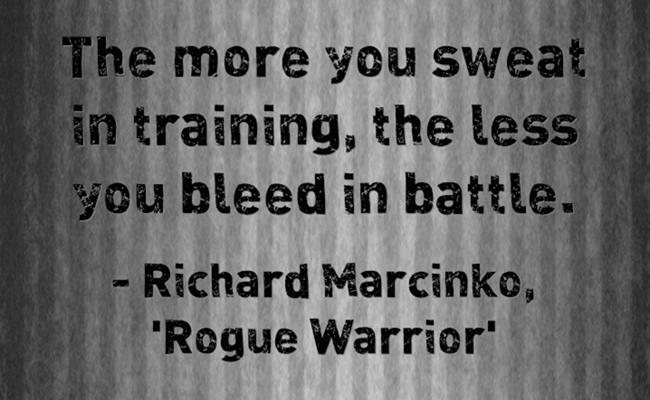 A 3bet is a raise after an open raise.

Pre-flop, the BB is considered the first bet.  The first raiser (open raiser) makes the 2bet.  If somebody decides to re-raise the open raiser, then this is the third bet to go in, making it a 3bet.  Beyond this is a 4bet, then 5bet and so on.

You can 3bet both pre and post-flop.  Post-flop, if somebody makes a cbet, that’s the first bet.  His opponent comes in for a raise, that’s the post-flop 2bet.  Then the original raiser comes back over the top with a re-raise, making this the post-flop 3bet.

Aggression is the name of the game in poker.  Everyone is trying to out-aggress everyone else, and we’ve got to understand how to do it ourselves, as well as how to combat it.  The initial raise, the 2bet, is a part of almost every hand played, so that was covered in MED #1 on pre-flop opening theory.  Some of those opens are necessarily steals b/c we open from later position with weaker hands to steal the blinds and antes, but these are still just 2bets.  That’s why stealing blinds was MED #2.

So, this leads us to discussing the next most aggressive play in poker, the 3bet.  We will build upon the knowledge we’ve gained in MED’s #1 and #2 to help us with this one.

And for a quick preview, MED #4 is on blind play.  This comes after 3bets because a big part of playing from the blinds is defending vs steals, and the 3bet resteal is one of the best ways to do this.  Learning about 3bets first, both making and defending, will help us play from the blinds more profitably.

Most decisions in a hand revolve around three choices; fold, call or raise (in this case reraise).  Your goal in poker is to make the most +EV choice every time.  So, that’s why you’d make the 3bet; because you feel it’s the most +EV play available to you.

Let’s look at your 3 choices:

Before you make your decision to 3bet, think about all three options and go with what you deem to be most profitable.

So, as the question above implies, there are only two purposes for any 3bet; for value or as a bluff.

3betting for value allows us to build the pot with a hand that likely has card advantage pre-flop (ex. QQ+ and AK).  We expect to get called by worse or to be 4bet by worse, which is a bread and butter situation for us.  This means that we’re ahead of their 3bet continuation range.  They opened the pot and the range they continue with isn’t as strong as our hand.

If the opponent folds, then we’ve earned $ pre-flop.  If they call we can expect to win more money from post-flop action with a superior hand.

Value 3betting: we have better and we want action.

On the other hand, when we’re making a 3bet bluff, we have a hand that is much worse than their continuing range.  Maybe we have KJ and we know they only call or 3bet with KQ, AQ+ and TT+.  In this case, we don’t want action and the best outcome is that they fold to the 3bet, awarding us the pot then and there.

3bet Bluffing: we have worse, and we want them to fold.

There are 4 important things to think about before we make a pre-flop decision to 3bet.  Actually, these four things are what we should consider before every decision in every hand, but they rise in importance in 3bet pots.

2. The Cards Dealt to Us

Our cards matter when 3betting. Sure, there are times when 3betting ATC can be profitable.  But with the rampant aggression in today’s games, 3bets get called or 4bet with much more frequency than ever before.  So, we want cards that either play well post-flop, or they contain blockers like Aces and Kings which makes it less likely our opponent has a hand worth continuing with.

Poker’s all about position, position, position. When you 3bet IP, you’re more likely to gain the folds you’re looking for, as well as you’ve got a huge advantage post-flop.  If you 3bet OOP, you’re knowingly giving your opponent positional advantage over you.  Be careful before you click that raise button if you’re doing so OOP.  You should be very sure that your opponent is going to respond as you’d like them to.

The effective stack size will help you determine if your opponent is capable of finding the fold button. The shorter the stack of the player you’re 3betting, the less likely they’ll find a fold.  This holds true for both cash play and MTT play.  At the opposite end of the spectrum, if you find the effective stacks at 200bb’s, then your 3bet can eventually lead to a 400bb pot depending on the action from here on out.  Be aware of this and treat these large pot situations with the respect they deserve.

For this episode and the entire MED series, nothing I discuss will do you any good if you don’t start using it at the tables or in your study sessions.

You can study 3bets more by watching training videos and reading articles.  There are thousands out there on every poker training site and blog.  It’s such an important topic that every coach discusses it.

But, on top of watching videos and reading, you need to hit up your PT4 database to run through your 3bet hands.  It’s a very simple filter: Actions and Opportunities Preflop, go to Preflop Raises and turn on “Raised Preflop any 3bet.”

I recommend grouping the report by position.  Start with the BTN and go through all the hands there.  While you go through each, think about why you made the 3bet.  Was it for value, as a bluff, or for apparently no reason at all?  Maybe it was just aggressive spew.

You need to assign a reason for your 3bet, then review the hand while keeping in mind the four considerations I discussed today:

You need to come to one of two conclusions as you evaluate each hand:

But on the BTN, I’m currently at a negative profitability.  It’s not a lot, but it’s worth looking into.  I’ll do some digging here, but being down on the BTN in 3bet pots could be due to:

There are so many things to look into, and you should be doing this same kind of thing as you examine your 3bet hands.

Here’s my challenge to you for this episode:  Use the STUDY directions above and review your 3bet hands for one hour every day over the next week.  Decide if each 3bet was for value or a bluff, then determine if you made the correct play or not. Remember, value 3bets want action and bluff 3bets want to end the hand.  Did you get what you wanted?  Or, did you even know what you wanted when you made the 3bet?