The Numbers Behind 7 Critical HUD Statistics

I’ve always been a “numbers guy”. I love math; majored in math in university, taught SAT math and I use it everyday in my poker and coaching.

The HUD statistic math I’m about to share with you will help you analyze your stats and win rates as well as exploit your opponents based on their stats.

Listen to this podcast episode:

Why Are HUD Stats Important?

Statistics tell us how frequently a player makes an action (their tendencies in certain spots).  If we know how often they do something, we can find ways to exploit that frequency.  For example, if somebody 3bets from the SB at 12%, we know they’re bluffing more than 60% of the time.  How do we know this? 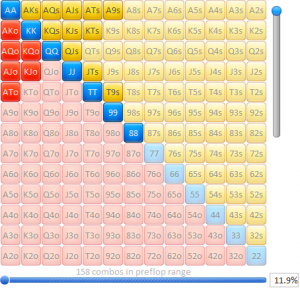 These 158 combos only contain 62 combos of value, which means 96 combos are likely folding.  They’re bluffing here 96 out of 158 combos, which is 61% of the time.  If they’re folding all of their bluffs, then our 4bet to 25bb’s is about break-even versus a 10bb 3bet and we’re printing money if they 3bet to 11 or 12bb’s because they’re folding too often.

Every time they 3bet us, we should be considering a 4bet as a bluff.  This works very well if we open from the BTN, and works extremely well if we’re cold 4betting from the BB versus their SB 3bet and a wide pre-flop opener’s range.

You can see how powerful it is to understand our opponent’s frequencies.

The 7 Critical HUD and Report Statistics

I’ll discuss 3 or 4 aspects for each of these stats:

Stat Description: for cash players, the BB/100 hands win rate is how we measure our profits, in BB’s, in relation to the # of hand played.

How to Exploit: Knowing our win rate gives us an idea of how much we can make in the long run, but it also gives us something to shoot for.

You can see how increasing our win rate and the # of hands played can have a serious effect on our bottom line.

The bottom line: you can’t improve what you don’t measure. Start tracking your win rate now and work on ways of increasing it to get more out of your time on the felt.

See how I would take notes on this page within my poker journal:

Stat Description: ROI is your return on investment, and for you tourney players out there, your ROI is how you track your profitability per tournament played (this is for SNG’s and MTT’s).

Formula for the Stat: Net $ money won (so the total $ prizes won minus the buy-ins) / total $ buy-ins.

How to Exploit: Just like increasing your win rate, bringing your ROI up to 25% or 30% or more means for more money won.  So, it’s your job to work hard to increase your ROI.  Find softer tourneys, improve your game, get into the money more and make more final tables.  It’s easier said than done, but you gotta get crackin’ to do it.

Want to play poker tournaments with me and other Smart Poker Study listeners? Click for details on the monthly ACR $75 Guaranteed.

Stat Description: This is simply the number of hands you’ve played against an opponent.

Formula for the Stat: It’s just the total # of hands played.

Putting the # in Perspective: this is the important part. Let’s say you play two hours with Susie, you’ll get a good feel for how Susie plays and you’ll accumulate maybe 150 hands in the two hours.  Okay, 150 hands is a decent feel, but it’s just one session and who knows how Susie may have deviated or stayed true to her normal game.

But, what if you played with Susie for two hours on 3 consecutive days?  You’d have a much better understanding of her play, and you will have seen it across 450-500 hands.  That’s great, pretty good understanding I think.  And, what if the next week you did the same, 3 more days at 2 hours per day would give you an additional 500 hands on her over 12 hours of play on various days.

If you don’t have a ton of hands, you can always exploit at the extremes.

VPIP (Voluntarily Put $ in the Pot)

Stat Description: this is how often the player voluntarily puts $ in the pot (not counting the forced blinds)

A 20% range means they put money in with 270 combos like any pp, every broadway, sc’s 54s+ and maybe T8s+. A lot wider, with tons of speculative hands and hits the flop only 35% of the time.

How to Exploit: The wider the range, the more likely they’ll fold to 3bets and the more often they’ll miss the flop.  You can call IP versus the wider ranges and 3bet them as well.  You can play IP versus the tighter ranges as well, especially seeing as how they’ve got so many pairs that whiff lots of flops.  If you do a lot of range analysis off the felt, you can get a feel for how often each of these ranges hit various flops and you can learn which board textures you can bluff them off of more easily.

Stat Description: the % of the time the player put in any raise pre-flop

Formula for the Stat: # of times the player raised / the chances they had to raise

Putting the # in Perspective: You can think of the % here just like the VPIP % in that it equates to a range they’re making the raise with.

Example: Somebody who is only raising 2% of the time (those lovely passive fish we want to play with), at 2% that’s only QQ+ and AK.  Super nitty.  Contrast that with LAG’s who can be raising that wide 30% range from above.

How to Exploit: Knowing their total PFR %’s is important, but it’s even more useful seeing it by position.  A player may raise pre-flop 20% of the time in total. However, if use the Smart HUD with its 7 custom popups, you can see their PFR % broken down by position. This way, you’ll have a great idea of how to exploit them based on the position they raised.

Stat Description: % of the time they made the 3bet pre-flop

Formula for the Stat: # of pre-flop 3bets / the opportunities to 3bet

Putting the # in Perspective: The number itself is important as it corresponds to the range of hands they do it with. But, I want to talk about the two numbers you see in the HUD that make up this #.

On the other hand, a 10% 3bet is much less than 20%, but if it’s 30 times out of 300 instances, then it’s pretty darn reliable because they’ve had so many opportunities to 3bet.

How to Exploit: The higher the number, the more often they bluff.  And, the bigger the sample, the more accurate this # is.  Anything over 100 samples is very telling and I would make plays based on this, and the higher the better.  Between 50-100 is good, but below 50 is where you start to take your chances with the 3bet.

Stat Description: % of the time the preflop raiser made the first bet on the flop if they had the chance to do so

Formula for the Stat: # of times they cbet / the # of opportunities to cbet.

Example: A cbet of 30% means they cbet the flop 3 out of every 10 opportunities they had the chance to do so.  Since most ranges hit the flop around 30-35% of the time, this is a pretty flop honest person.

Putting the # in Perspective: We went over a few ranges and hit %’s earlier, and here they are again:

All of those “hit %’s” are pretty infrequent.  Think about yourself or some of your opponents who cbet 75% or more?  This means you or they are cbetting as a bluff or semi-bluff more than half the time!

How to Exploit: By playing IP and raising your frequent cbetting opponents on boards they don’t often hit, then you’ll be able to take away a ton of flopped pots from them.  What about OOP?  You can check-raise over their cbets on hard to hit boards as well to take it away.  Conversely, if your opponent only cbets 30%, it’s an easy fold most of the time.

#1: Watch the note taking video above and do the same. Add this episode’s notes to your poker journal.

#2: I just broke down 7 stats for you.  I gave you descriptions, formulas, examples and put each into perspective with a way to exploit. I want you to do the same for these additional stats: Raise First In, Fold to Steal, Fold to 3bet, Fold to Cbet and Aggression Frequency.  Doing this work for yourself will help you exploit with these stats even better.