Today's turbo tournaments tip podcast is courtesy of Alex Fitzgerald and PokerHeadRush.com. Sign up for his daily strategy newsletter.

Also, save $400 on his 13-part course with Mike Wasserman (sale ends Wednesday, December the 15th at midnight!) 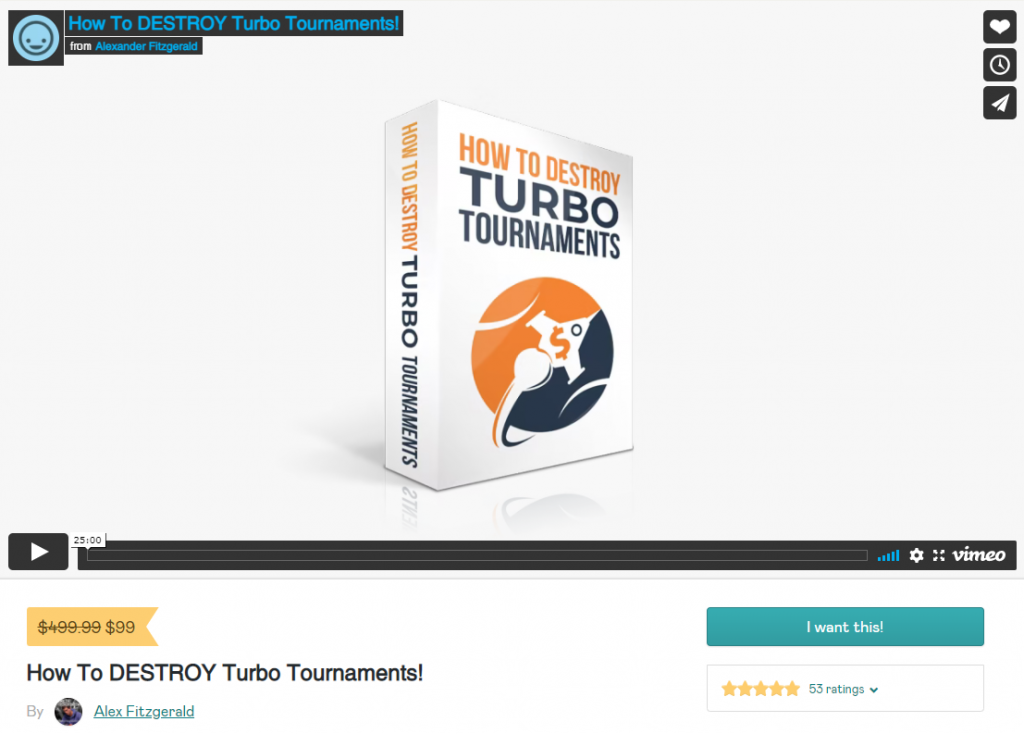 Listen to the article as you follow along below:

So, you’re playing turbo tournaments but you’re not getting the results you want. Do I have that right?

It happens. Turbo tournaments are nuts. Talk about action. From bliss to devastation in minutes. It never ends.

Then, on occasion, you win one! And the final table was like 19 minutes long, and you’re not even sure what happened.How do you tame these beasts more often?

There’s actually a ton of different finesse-laden strategies you can employ, which I discuss quite a bit in my series How To DESTROY Turbo Tournaments, but here’s some blunt fixes you can apply QUICKLY to start getting results fast.

This is one quick tip you can employ that people constantly neglect, and it will get you REAL results FAST.Think about who plays turbo tournaments…Tournaments are not for disciplined people. Disciplined people often go, “I’ll play cash, and I’ll head out when dinner is ready.”People like myself go, “LOOK AT ALL THAT MONEY FOR FIRST! LET’S GO!”Now, there’s another level to this:That’s the guy who wants a ton of money and wants it FAST.That’s a lot of people playing turbos.They put money on a football game and now they’re goofing around. They see the big money in tournaments and they want it. But they don’t want to wait around. Let’s get to jamming stacks in NOW!I love these guys.The best part about these people?They’re typically not terrific at poker.They’ll be broke quickly. Your job is to get their money before they give it someone else.You’ll see some people just limping in A TON at the beginning of these tournaments because they’re bored at half time. Or they’re half paying attention while watching Netflix.Raise these guys up! If your hand is ahead of their range and you’re in late position, isolate them!So many times you can do this and mercilessly value bet down, taking half or all of the weak player’s stack. That’s a HUGE edge for when the turbo stack jamming war begins.

If you’re playing a live casino tournament, the damn thing is going to play like a turbo. It goes too fast and Chris takes all day to make a decision, and once again he’s at your table.Your job during the early levels is to pay attention.Again, you see the frequent limpers? Take advantage of them.If you see a guy just raising a third of the hands or any damn thing he wants, work to bust him too if you have something halfway decent.But more importantly: Pay attention to who really doesn’t understand tournament poker all that well.They’ll usually just tell you they normally play cash! It’s amazing!These guys will not call off their chips correctly deep in tournaments. Nor will they jam as wide as they should. Don’t call off versus them wide but do move all-in on them more often.

Be careful with the late registering.You’ll see people who are used to a certain site’s rhythms. They know that if they register an hour or two late they’ll be fine, usually. But then they don’t notice it’s a turbo or they don’t care, and they register. Then, they’ll say to everyone, “oops, I have 7X!”The truth is: They just wanted to gamble. They’re using this as an excuse. This shouldn’t happen weekly.Just pass on that tournament or register earlier. There will always be more tournament poker if you’re not feeling comfortable.

This is probably the best tip I could give you, but no one is going to use it.We all LOVE playing those big tournaments on the big sites with HUGE guarantees. But the problem is the variance in those tournaments is colossal.My friends and I have made a ton of money playing turbos on smaller networks which are usually fed by sportsbooks.There’s a cost to doing business this way. The software is terrible. Statistic tracking is difficult to come by. Cashouts are a chore. But you can’t beat 80-person fields where half the people don’t understand push-fold math.There are other benefits to playing on these sites too: Less variance, top-heavy prize pools, occasional overlays, etc.I tell people game selection is 90% of my job. If you could play in a game versus push-overs and make real money, why would you deviate? Yet, a surprisingly large number of people don’t want to take the time to capitalize on these edges.

5. Practice Push/Fold In Your Free Time

This one always blows my mind.Back when I started playing SNGs in 2006, poker tools were hard to come by. When I found coaches who could teach me push/fold math I paid good money to hear from them.Now, there are affordable products that will quiz you on specialized situations, and programs that will quiz you on generic situations…and no one uses them!

They’d rather set real money on fire in an actual turbo as opposed to learning in a simulation. What the hell?Take 15 minutes a day to practice. That’s it. If you feel good, keep going. If not, call it a day. Just this will take you so far.

6. Don’t Raise/Fold In To Short Stacks

You see guys do this all the time.They’re multitabling, they’re not paying attention, and they get 6-7s on the lojack. They automatically 2X without looking at the stacks behind them. They look a second later and realize they raised into 4 rejam stacks. One moves all-in. Doh!Save yourself this heartache.

Make your turbo tables a different color. Put them in a different part of the screen. Make them larger. DO SOMETHING to remind yourself there will be shortstacks EVERYWHERE in that tournament and you have to be careful about raising light!

Similarly, guys will be autopiloting and then will cold call in position with a suited connector, not realizing they’re in a turbo. Then, one of the roughly 938 shortstacks behind predictably shoves in, and they’re forced to fold.Losing 2-3 big blinds preflop is no joke! An average win rate in tournaments is 5 to 10 big blinds PER 100 HANDS! You could lose 2 to 3 of them in ONE HAND!Watch those stacks behind! Don’t give away those piss poor cold calls!

Again, the best advice anyone could give you is this:Practice in your free time.Play weaker turbos with smaller fields.Play a lot.How do you play a lot? You give yourself a chance to see variance get run down by playing low stakes and playing a ton.Do you normally play $55 freezeouts? Please know that the variance in $55 turbos is far higher. If you wanted to just play $5 to $33 turbos that would be a responsible decision.Play a ton of them, focus on small weak fields, practice away from the table, and never fall asleep at the wheel with a bad open or cold call. Doing just these things will give you a HUGE edge on the field.Good luck to all of you.

Get one of my poker courses: