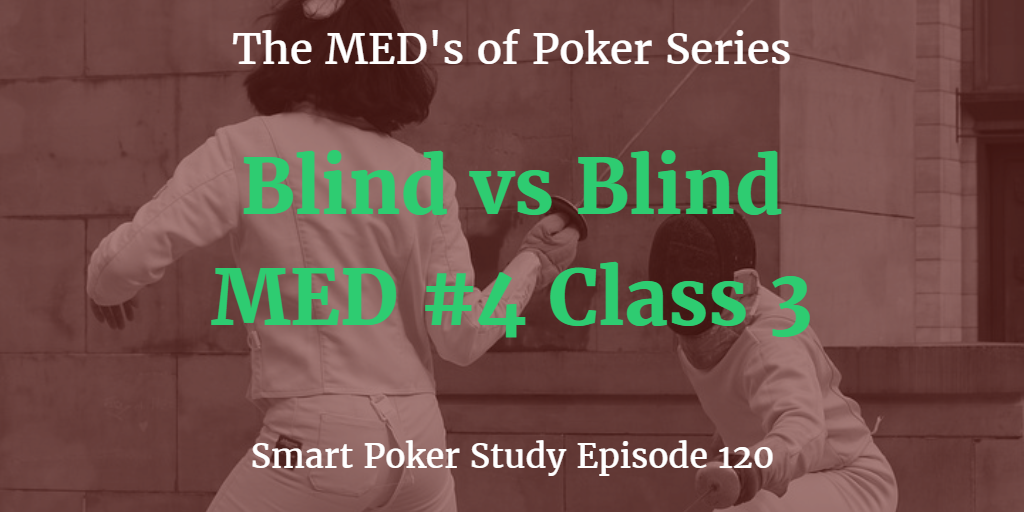 I conclude MED #4 on Blind Play as I discuss blind vs blind confrontations along with the most important stats that will help you take down more pots pre-flop.

Episode 119 contained commentary from a 25NL session I played.  I made some good plays and some mistakes, but I talked some valuable strategy throughout. 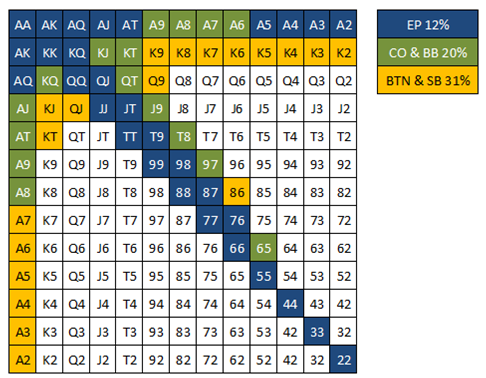 When I’m first to act in the SB, I use my BTN opening range.  I use this range because it’s a great steal opportunity against the right BB players.  I’ll steal from them until they fight back.

If the BB starts to fight back with either calls or 3bets, I’ll re-assess and tighten up if necessary to avoid the 3bets or to see the flop OOP w/ too wide of a range.

When I’m in the BB and the SB open limps, I raise with my entire BTN range.

I view SB open-limps as a super weak and passive way of trying to see the flop super cheap.  I can’t allow this.  Depending on the SB player, I’ll make it either 3bb’s if they have a high Limp/Fold stat.  Or, I’ll make it 4bb’s if it’s going take a little more persuasion to get them to fold.

Another reason to raise over limps is so that you can more profitably cbet bluff on the flop.  As the raiser, you have a stronger expected range so you can more successfully cbet on Ace, King and Queen high flops.

In the BB, when the SB open raises I defend with my 20% CO opening range.  The reason I use this pretty wide range is because I’ve got position, and lots of my SB opponents are just like me and they open-raise wide.  This makes it very difficult for them to defend vs my 3bet, and it’s difficult to go post-flop with such a wide range OOP.

A note about using ranges: you don’t have to stick with them.  Poker is a game about making the best decisions possible.  If a hand falls within your range, but you feel it’s -EV to play it, then you’re better off folding the hand.  Use that poker intellect of yours and decide if a given action will result in the outcome you’re looking for.

Knowing your opponent gives you the best chance for successful bluffs or gaining extra value.  Here are some questions to ask yourself:

The more you know about your opponent the better, and if you know they won’t react the way you want them to, then you may want to change plays or adjust bet sizings.

When you’re up against an unknown raise them until they let you know they won’t be pushed around, then adjust accordingly.

Also look to their post-flop game to get an idea of how you can exploit them should you get to the flop.  If they hate folding post, then go for value only.  If they’re foldy, then you can pull off some good bluffs.  The more often they fold post-flop, the more you want to get into bloated pots with them, especially IP.

Here are 5 HUD stats that will tell you loads about your opponent:

In a BvB confrontation your initial choices are:

But the action doesn’t end with your first choice (other than fold): You’ve got to think ahead and plan for how your opponent could react.  If you’re in the SB and open raise, you should have an idea of how you’ll approach the flop should they call, and also know how you’ll respond to a reraise.

Having a plan keeps things simple and keeps you from getting surprised.  There’s an adage I really like (don’t know who said it): If you’re surprised by how your opponent responds, then you didn’t give it enough thought.

You made your plan, now it’s time to stick to it.  Maybe you raised with the intent to fold to a re-raise, but your opponent times down then min-re-raises you.  This feels like a bluff re-raise.  Is your KTs now good enough to do battle?  Maybe, maybe not.  But, your intent was to raise as a steal, and a re-raise means you’re absolutely beat.  Don’t go back on your plan just because of the odds being offered.

You generally want to follow your plan, but when the flop/turn/river hits, things can change quickly.  Maybe you planned on folding most flops with your speculative 86s vs the flop honest cbettor, but what if you flop a full house and the opponent leads out?  Well, flopping the nuts means a change of plans is in order.  It’s okay to adjust your plans when things take a drastic change on the turn of a card.

In general, you’re going to approach post-flop play like you would at any other time.  You’re either IP or OOP, vs an aggressive or passive or foldy player.  Take each situation individually and make a plan for the ftr once that flop hits.

But, one important thing to note in BvB confrontations is that we’re often dealing with wider ranges.  People open wide and call wide out of the blinds.  They’re fighting for the blind after all!

When thinking about wide ranges, they can hit flops pretty hard, but they miss quite often, they make a lot of mediocre pairs or they hit weak to strong draws.

You’ll want to take advantage of position when in BB, and put pressure on your opponent’s wider ranges.  Be a bit more careful in the SB as they’ve got position on you.  Fold to Cbet IP and OOP, as well as Cbet IP and OOP are key stats to fixate on.

Not so many Aces… 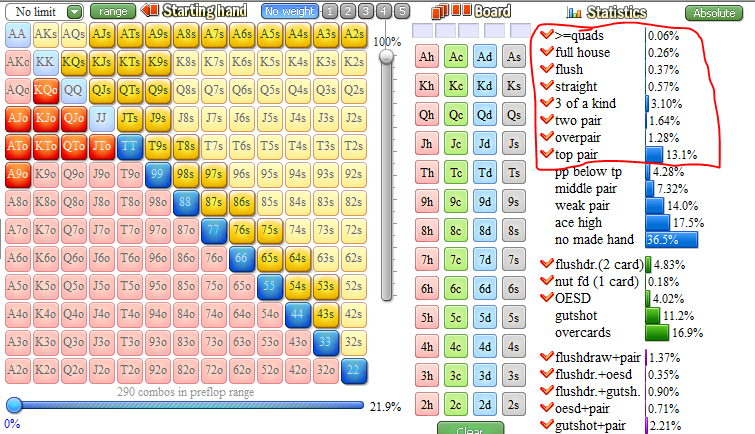 Many of us in BvB confrontations get scared when the Ace hits.  But, if your opponent has a wide calling range, they’re likely folding a ton on Ace high boards.  Use that flopped Ace to your advantage, especially if you were the pre-flop raiser.  In your opponent’s mind, you’ve got tons of Aces in your range so they’re more likely to fold to your cbet.

You should have a general idea of how to approach post-flop decisions given the likely wide ranges in play.  But, keep in mind what I said back in episode #113:  If you’re flummoxed, don’t flounder, just fold.

Here’s my challenge to you for this episode:  Open up Flopzilla and do some Ace combo counting.  How many Aces does a 10% calling range have?  What about a 15, a 25, or even a 30% calling range?  How many Aces does a 15% opening range contain?  What about a 20 or a 35% opening range?  Start doing some work on this off the tables and you’ll soon realize that an Ace on the flop isn’t the scariest thing when you’re not holding an Ace yourself.

With every podcast episode, I’m going to give you 2-3 additional pieces of content you can study from somewhere on the interwebs or in books

I’ve got three goals I’m pursuing with the NUTTS segment:

So, to continue your studies into Blind vs Blind play, here are 2 pieces of content to study: