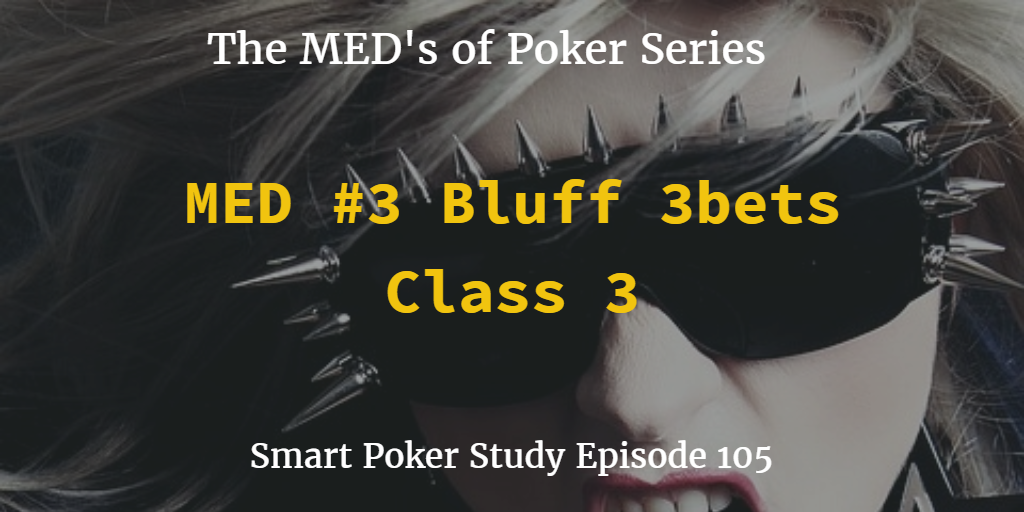 I discuss what to look for in the pursuit of making better bluff 3bets, as well as 3bet squeezes. 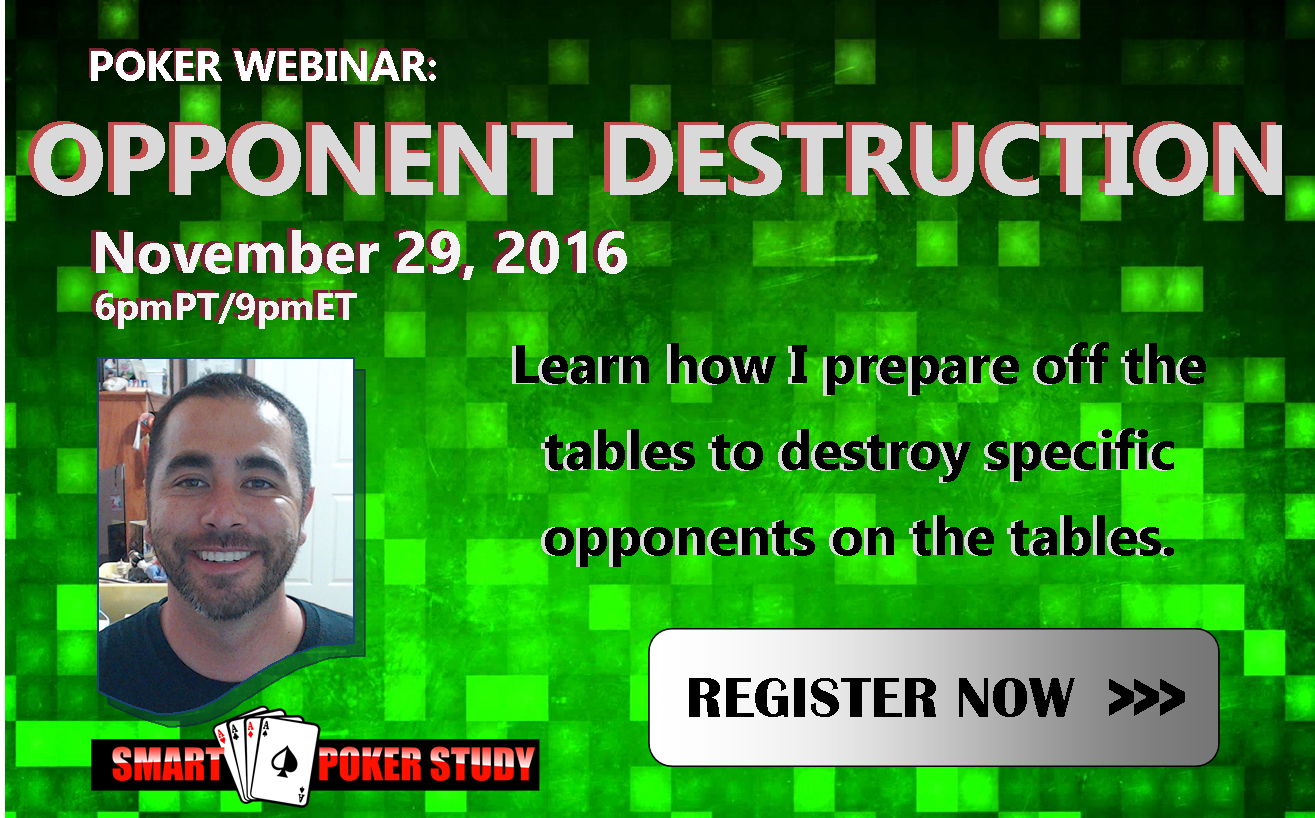 In episode #105, I discussed value 3bets.  Make sure you listen to that, as it’s the yin to this episode’s yang of 3bet bluffs.

You’ve GOT to have a reason for making your bluff 3bets.

In episode #49, I covered a leak that many players have: betting for no reason.  Some people bet, raise or 3bet just to do it.  “Gotta keep my 3bet % high, put that pressure on!” (hey, this was me!)

But people don’t realize that due to the increased size of 3bet pots, it’s even more crucial to know why you’re making the 3bet.  There’s more profit potential with bloated 3bet pots, but also, this makes for more costly mistakes.

As you can see there’s so much more to gain and to lose in 3bet pots.  Bigger initial pots mean for bigger showdown pots. This is why it’s crucial to have a solid reason for your 3bet.

When you’re 3bet bluffing, there are three things to consider; 1) the opponent, 2) your cards, and 3) those yet to act.

Your opponent is the first factor in deciding whether or not to bluff 3bet.  Just below I’ve got four great questions to ask yourself to gauge whether or not this is a good 3bet bluff spot.  When you give critical thought to these questions, you’ll often come up with the right answer.

I had 87s and decided to 3bet.  Now, let’s answer these 4 questions with this opponent and situation in mind.

In this instance it’s very wide.  This is good because the wider the opening range, the more often they’ll fold to 3bets in general.  The more nitty the opponent, the more likely they have a hand to defend with, so your bluffs work less frequently.

At a 65/29, he’s got a super wide CO stealing range, with lots of suited hands, pp’s, broadways and Aces and Kings.  If I get called, my 87s plays well vs such a wide range.

How will he likely respond?

This is where things get ugly.  He’s a 65/29 player, and looking at the gap between VPIP and PFR, there’s a 36% difference.  This difference is his propensity to call.  He calls a super wide range, and much of this range has an advantage over 87s.

So, he calls a lot, doesn’t fold to 3bets that often, and he’s got position on me post-flop. This is not a good 3bet bluff spot.

What range does he continue with?

We can assume he’s calling here given everything we know so far.  If he 4bets, we’re just folding because we can’t defend with the 87s OOP.

So, what’s he calling us with?  I’m assuming he’s 4betting his AA, KK and QQ, and with his propensity to call, he’ll be calling his AK’s and his JJ.

I’m also thinking he’ll call with every pp, every Ace, all broadways, all suited Kings, Queens and Jacks, as well as sc’s and gappers and off-suit connectors.  You might disagree, but he’s called very wide so far, and he’s IP, so I think it’s reasonable.  So this ends up being a pretty wide range of 41% and 548 combos of hands. 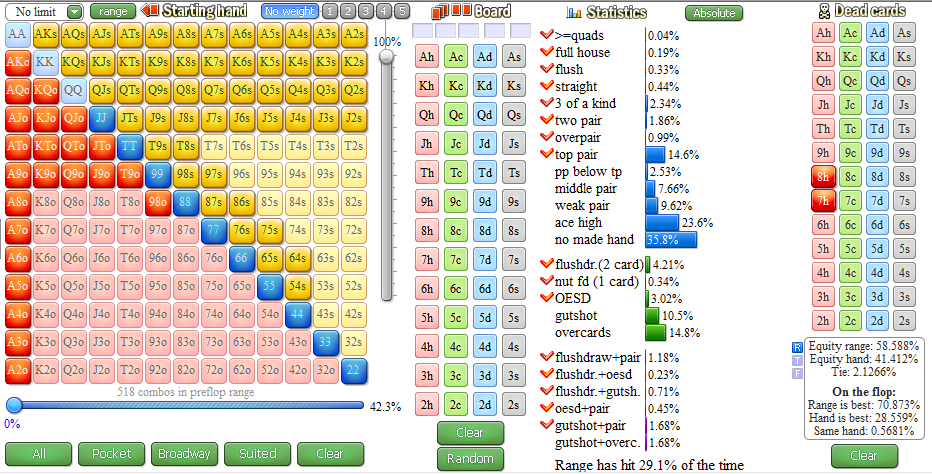 Vs this range, I have 41% equity with 87s.  Not too bad, but not a pretty spot to be in.  I don’t have card advantage, nor positional advantage.  I can argue I’ve got skill advantage, but without the other two this is far from a bread and butter situation.

Does he have any post-flop weaknesses?

I mentioned his fold to cbet on the flop is 45% (5/11) and his turn fold to cbet was 0% out of 2 hands.  These numbers mean he doesn’t like to fold post-flop.  This is great if I have a value hand or hit the flop strong, but getting him to fold to my bluffs from OOP is a losing challenge, one that I shouldn’t jump into lightly.

So, if I would’ve answered these four questions before I made the 3bet, I would’ve realized a call is better with this speculative 87s and the SB discount.  Whether I call or 3bet, I’m going post-flop vs this non-folding donk no matter what, so I’d be better off doing so with a smaller pot to fight for.

I covered 3bet ranges back in episode 94, which was the 3rd class in MED #1 on pre-flop ranges.  Listen to that for my thoughts on 3bet ranges and which hands to include in your 3bet range vs your calling range.

What I want to talk about now is the difference between complete bluffs and semi-bluff hands, as well as some blocker talk.

The cards you choose to 3bet bluff with matter a ton.  Some are complete bluffs like T50: it has very little post-flop equity and no blocking power at all.  You absolutely don’t want any calls with this hand.

Conversely, a semi-bluff 3bet hand like A5s has some great post-flop equity.  It has decent TP possibilities as well as flush and straight draw possibilities.  Plus, having the Ace as a blocker means he’s less likely to have AA, AK or AQ or even AJ.

Peep this: if we’ve got 78s, this doesn’t block any of his possible strong hands.  He’s got a total of 54 combos of AA, AK, AQ and AJ possible.

But, if we’ve got A5s, then he’s only got 39 possible combos of AA, AK, AQ and AJ.  That’s a 30% decrease in strong hands that can continue vs the 3bet.  This ups your chances of getting the folds you’re looking for when 3bet bluffing.

You can increase your chances of successful 3bet bluffing, choose blocking hands with some post-flop equity in case you get called.

It’s great when your opponent thinks you only 3bet with value hands because you either don’t 3bet often, or you only showdown strong hands.  If you 3bet too frequently, then your opponents will expect you to have garbage quite often and they can fight back accordingly.

There’s a careful balance to strike with your 3bets so your opponents fight back less often.

You can control your 3bet % by choosing good spots to run your bluffs.  Choosing spots wisely will naturally limit how often you 3bet and will lead to more successful 3bets.  But, it will also give your opponents the idea that you only do so for value, making your bluffs more likely to succeed.

Pro Tip: make a note when an opponent sees you show up with a total bluff.  If you pulled the trigger on a 3bet bluff with T5o, and you got to showdown, make note of it under the player that you 3bet.  If they’re using PT4 for example, it records what hands the opponent makes certain plays with, and 3bet hands is one of those it records.

Knowing what your opp has seen you bluff 3bet with in the past will give you an indication of how they view your 3bets and your perceived range.

When you make the 3bet bluff, you’re not just doing it vs the opening player.  You’re also 3betting the players remaining at the table.  They can choose to fold, call or make the dreaded 4bet.

There’s one basic question to ask yourself regarding the players yet to act, and that is, “How will they respond?”

By answering this for each remaining player before you make the 3bet, you won’t be surprised or throw up in your mouth after what happens next.  Plus, you’ll already have a response planned.

So, plan ahead for what you’ll do vs the 4bet or a call, and respond according.

Remember, you’re bluffing, so you want folds.  You’ve got to size it enough, whether IP or OOP to get the folds you’re looking for.  If your opp is a passive station, you’ll probably have to size it bigger to get folds, and if they’re a massive nit or a TAG, then sizing it smaller may work just fine.

Also, your position matters.  People are more likely to fold when facing a 3bet OOP than if they’re IP.  So, size it bigger when bluffing OOP.

I generally like to see 75% Fold to 3bet or higher for my 3bet bluffs.

Looking at this from the opener’s viewpoint, he can 4bet or fold, but he can also call.  He needs to call 6bb’s to win the total pot of 19.5bb’s, so 6/19.5 means his hand needs only 31% equity.  Lots of hands have this much equity vs a balanced 3betting range that has value as well as bluffs in it. 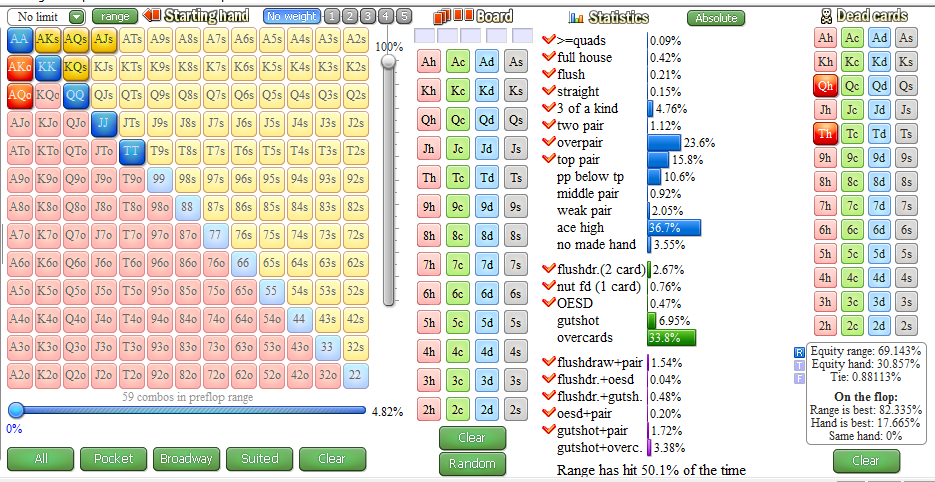 You have to tailor your sizing to achieve your desired result, and tailor it based on the size you think your opponent will fold to.

A squeeze is a 3bet over an open raise and one or more callers.  The original raiser here might have a strong hand, but before he calls or 4bets, he has to contend with how the callers will react and how the 3bettor will react.  And if you’re 3betting IP, then he’s got to be concerned with going post-flop OOP vs possibly 2+ other players.  This puts max pressure on the original raiser to fight back with a strong hand or just ditch it entirely.

And thinking about the callers, well, they’ve often limited their range to mid-strength hands as they prolly would’ve 3bet themselves with JJ+ and AK, so you’ve got a perceived card advantage over them.

Hopefully, you’re making most of your 3bet squeeze plays IP, as it gives extra incentive for the others to fold to your 3bet aggression.

What to consider before the squeeze

And of course, our cards matter.  You should look to have blockers to make it less likely your opp’s will call.  Also, choose hands that play well post-flop in case you do get called.

I try to look for great spots to try a 3bet bluff squeeze.  If it’s not great and I think I’m likely to get callers, then I’ll just call myself with sc’s, weak suited Aces and small pp’s, or I’ll just ditch the hand.

I do this in a pretty simple way:

Here’s my challenge to you for this episode:  Search for good spots to 3bet bluff and to 3bet bluff squeeze.  Before you pull the trigger, ask yourself if your 3bet and the sizing you’re about to use will get the job done and will result in the folds you’re looking for.  For every 3bet bluff or 3bet bluff squeeze that doesn’t work, tag it with your PT4 software and review it the next day.  Figure out why your 3bet bluff didn’t work.  Did they actually have a good hand?  Are they too passive and call too often, but you didn’t realize it at the time?  Were you OOP and the opp’s never fold to 3bets when IP?  By asking yourself, “What did I do wrong?” you’ll be working to strengthen your game regardless of whether or not your 3bet bluff was a good one to make.

Please send me your poker strategy questions, and I’ll answer them on the FRIDAY Q&A EPISODES!

In podcast 108, I’ll hold the 4th class in the 3bet Yin Yang MED where we’ll get into 3bet defense with calls and well placed 4bet re-bluffs.