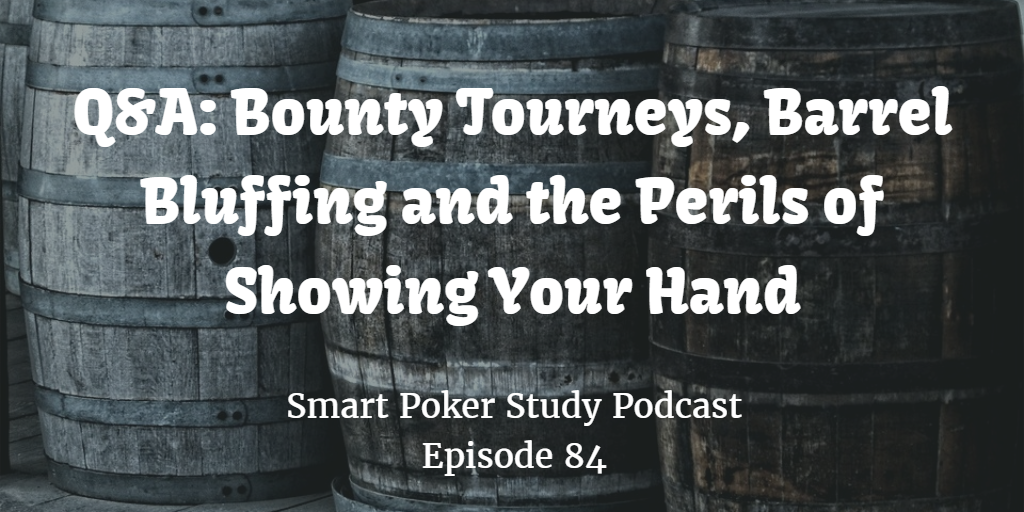 I answer 3 listener Q’s about playing in bounty tourneys, barreling your opponents off their hands and the perils of showing your hand unnecessarily.

Good Afternoon Sky!
I am hosting a bounty tournament this weekend. I have never actually played in one, but have been thinking about the strategic implications of the bounty in relation to overall tournament “equity” (buy-in vs payouts) and ICM considerations. Do you have any thoughts on KO Bounty Tournaments and how to adjust?
Thanks

I don’t play many bounty tourneys, but there are some considerations you have to take into account though because of the format and the way your opponents will approach it:

Hi Sky,
Any thoughts on how far to take a c-bet?
When I open a pot I usually c-bet even if I miss the flop. If I get called I will barrel the turn and if called again, do I barrel the river? Or shut down by checking and folding if villain bets?
Ed

There are no hard and fast rules here regarding barreling opponents off of hands.  But, there are 5 things you need to consider that will help you determine how likely your barreling will get him off his hand:

Make sure you review all your double barrel and triple barrel hands after the fact to see if your decisions were well advised or if you missed any important clues that should’ve told you not to barrel.

Hello Sky,
I’ve been trying to play in a lot of small stakes daily NLHE tournaments at my local casino. Low buy-ins with lots of the same faces playing. Last night I felt like I was playing well until one hand and it got in my head. I kept dwelling on it afterwards and thinking about my table image and went all-in with a weak hand for 19th outta 50.
Here’s the hand that set me off: I was in late position. Blinds were 75/150. Four Limper’s ahead of me. I raised to 450 with QQ. Big blind and one other called. I flopped a set. I bet large, 2,000 because there were two clubs on the flop. The BB hesitated but called, the other guy folded. The turn was a club. The BB bet 4k.
I started thinking he caught the flush and I did end up folding. That might have been a mistake but for sure my mistake was showing my fold. I thought I was showing off a big fold to save face and ego or something.
The whole table started saying, “How could you fold that with the river still to come!?!” Even the dealer said he would have played that.
It got in my head and it was all downhill from there. I felt embarrassed.
What do you think?
-Tim

In podcast #85, I’ll answer 3 listener Q’s about learning with your poker friends in a study group, my MTT opening ranges and dealing with adjustments for bubble play.