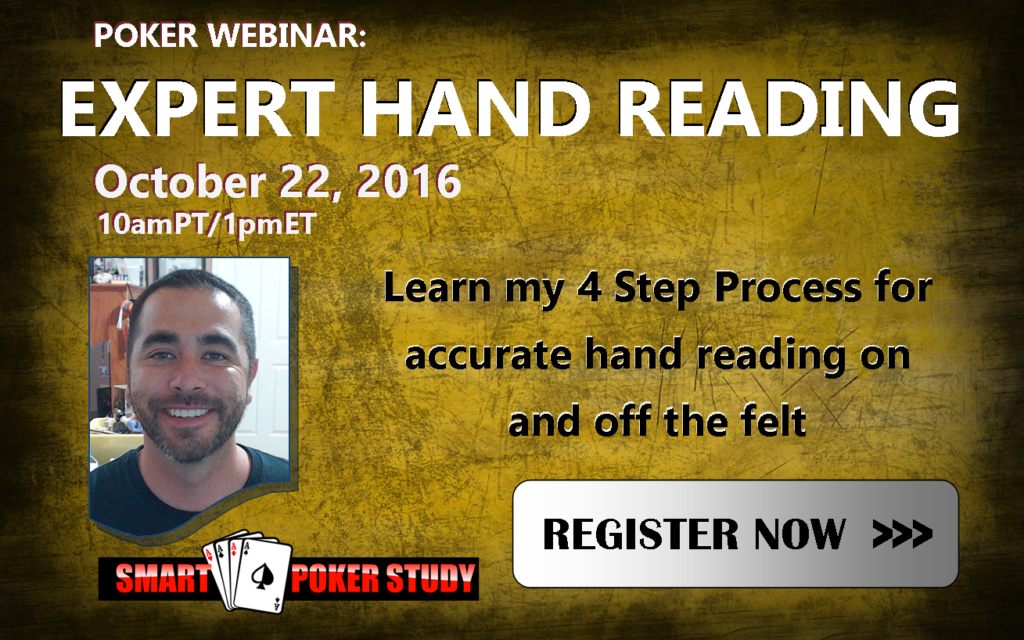 We start by discussing Brad's goals this month: 120 hours of play and $12,000 in profits on Ignition Poker as he's 4-tabling his cash game tables.

You need to focus on quality as well as quantity.

A-game Mindset with a Morning Routine

He started playing as a 19 year old in the late '90's (his dad played on Paradise Poker – old school online site).  Brad also had a friend go pro, and Brad caught the bug from him.  He saved up some money from his serving gig at Applebee's and moved 10 hours away to join his buddy and learn to play better poker from him.

He told his friends and family about why he was moving away, and this was met with an expected amount of ridicule.  But Brad didn't care, he followed his dream and went anyway.

He started playing LIVE cash games on Sun Cruise Casino.  This is a ship that heads out to international waters for a few hours.  The cruise had a great $5/$10 Limit game, and he luck boxed his way to some early wins.  Back then, you could just stick to tight play with strong starting hands and profit very well at the tables.

Right from the get go, Brad was into studying poker.  Before and after his shifts at Applebee's, he would do some studying.  Reading ‘Super System' or ‘Hold'em For Advanced Players' taught him much.  The man was obsessed with being the best player he could be and immersed himself in the game.

And speaking to this, Brad said of being a professional:

Brad and his pro buddy down in Florida would discuss hands and hit the Sun Cruise Casino together.  They treated their sessions as a competition and would strive to play better than each other.  This competition grew their skills, and they would also help each other out and discuss strategy together.

Brad has been able to develop many poker friendships over the years, and these friendships are integral to his success.  He's seen this with himself as well as many other pros in the games.  The old maxim, “You're the average of the five people you spend the most time with” totally fits this.

You can make great friends at the tables as well.  Don't be one of those hoodie up, ear buds in kind of guys.  Be talkative and chatty with others at the tables.  Talk strategy away from the tables, but be friendly at the table.  “Poker's about so much more than just who can make the most money.”

Brad had always shared his thoughts on poker with his friends.  But, his first coaching gig was a referral from a forum buddy.  Brad used to “lurk” in forums, learning from the best in the game at the time.  One of his friends referred a player wanting coaching to Brad, and his coaching started from there.

Brad says of coaching, “Coaching is not a magic bullet. You get out of coaching what you put in.”

His coaching style begins with learning what his students need and filling in what they're missing.  He'll watch an hour of game tape with them and learn how they think about poker.  Asking questions and listening to how the student speaks through their decisions tells Brad what he needs to know about their game and where they need to begin their work.  Then as they go, Brad continues to find areas to improve.

His students are expected to do their homework and improve their games through study and hard work.  He's up front about this from the get go, and expects obsession and curiosity out of his students.  An open-door policy and quick responses are other things he offers to help his students.

He loves hearing great questions from his students, and the most successful ones ask the best questions.  Great questions force him to answer well and make them grow their skills.

A leak he often finds in his students is not knowing how to approach 3bet pots OOP on whiffed flops.  When he encounters a leak like this, he'll have them go through their database for hands like this.  While reviewing, he'll ask questions like:

Repetition is key, so when he finds an area of weakness they hit it very hard with hand after hand of analysis.  He'll hit it hard until his student fully grasps the concept, then they'll hit another area of weakness in the same way.

A great piece of coaching wisdom Brad said: “There's no sense in studying uncommon situations… You want to get really good at the things that happen all the time.”

You want to spend your time and ask good questions about the common situations:

There's no hiding your leaks

His coaching is a cumulative process, where fixing a leak leads to finding another.  They'll tackle that next one, which in turn will lead to another.  His students can't hide their mistakes when reviewing game tape and answering Brad's specific questions.  This forces them to explain themselves, and from these explanations Brad learns what poker skills they're missing.

The EYE Think Tank is all about making a high level poker strategy community available to his students.  Here they can take the game seriously and talk to a like minded community of players who want to help each other grow.  This is a LIVE group coaching session, where the students get the opportunity to ask questions about different situations to each other and to a coach.

The EYE Think Tank is currently a Facebook group that right now anyone can join for free.  Brad puts up a link to a Zoom.us meeting that anybody within the group can access and get LIVE interactive coaching.  This is great!!!

The full program will go LIVE in November with sessions 3 times per week.  Two of the sessions will be led by Brad, and the other by one of his coaches.  His other coaches are prior students who take the games seriously and are pros themselves.  They are his superstar students, and he has full confidence in their abilities.

Currently, the EYE Think Tank is in a testing phase and Brad is figuring out what the members are interested in.  Click here to join the Facebook Group for free in October 2016.

The webinars are announced by Brad in the EYE Think Tank FB group.  You just need to click the link, join the webinar and start asking your questions!  Most sessions will begin at 8pm EST.

In November it will become a membership site at $149/month for 10 people maximum.  Members receive: