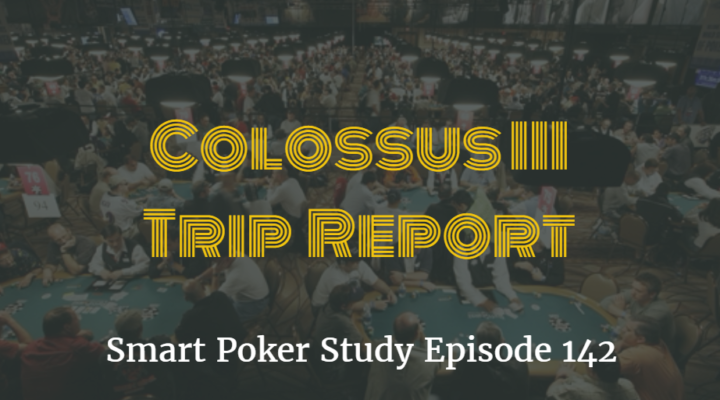 In this episode, I discuss my first WSOP cash in this year’s Colossus III.  I also gained some important LIVE MTT insights.

In episode 141 I discussed how I prepare for LIVE poker tournaments. I also gave you my trusty Evernote document filled with important “top of mind” ideas.

The wife and I flew in and Ubered over to the Gold Coast.  It’s directly across from the Rio and is a bit less crowded and quieter.  Found out on this trip that China Town is only :10 away.

The meetup took place at the Bowling Alley in the Gold Coast Casino.  We had a good time even though there were only 2 people who joined my wife and I.

Tricia Cardner hung out for the whole time.

Andrew Pieper (bikeking19 on YT) hung out and chatted as well.

David O. came by but didn’t see us.

Ralph M. lives in Vegas and we hung out during a Colossus break.

I enjoyed meeting all of you finally face to face.

The RIO has tons of cash game action; NLHE, PLO, mixed games at all levels.

Lost ½ a buy-in at 1/3.  Need to play LIVE more and get a feel for how LIVE players play.  Very loose and stationy.

Busting Out vs Moorman1

Amazingly, there were 3,966 runners for the day, so my 230th place finish put me in the final 6% of the field.  I’m super stoked about my results and I’m looking forward to a better placing next year.

Ask yourself: “What’s my edge over these players, and what’s my game plan vs each of them?”

Pay attention to every hand, and learn from SD’s.

I’ll drive into Vegas and stay off the strip for 2 weeks.  Gonna bring all the comforts from home (blender, kettle bells,  an extra monitor and microphone).

Gonna have another meetup planned.

I will plan to hit the other tourneys in town.  Check out some of the tourneys this summer in Vegas:

Here’s my challenge to you for this episode:  Get out there and play a LIVE tournament.  They can be a lot of fun and good learning experiences.  Take your online game and see if you can apply it to the LIVE realm.

A lovely audiobook review came in from “Amazon Customer” recently.

If you’d like coaching, please contact me via email and we’ll discuss how I can help you improve your game.

In episode 143 next week, I promise I’ll return with another episode in the Poker Math MED series.