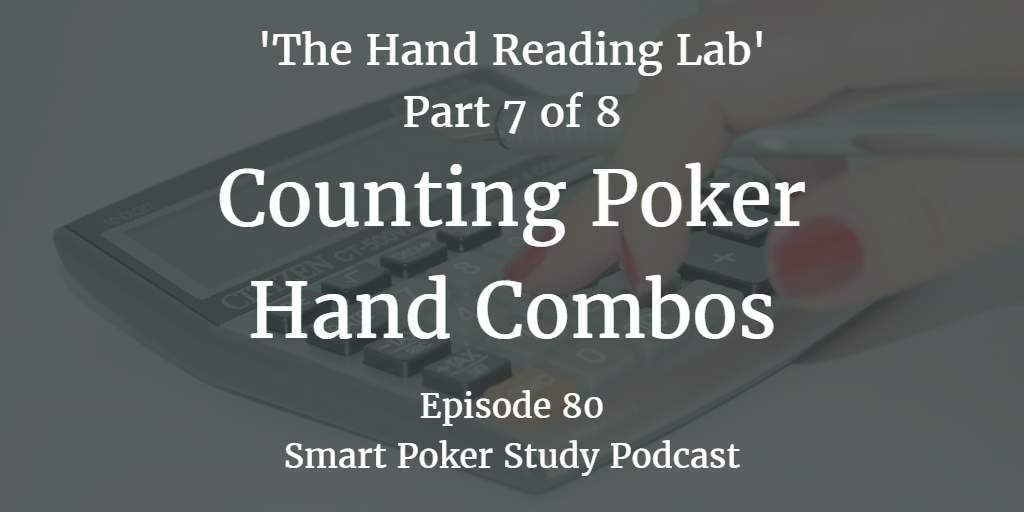 I show you how to count poker hand combos to aid your mathematical understanding of the game and the ranges of your opponents.

In episode 78 I read an article by BlackRain79 about putting lesser-skilled opponents on tilt along with an additional insight not mentioned within the article.

My mission for today is to teach you how to count combos of hands in poker.

Take the time right now to answer these questions as a quick little test for yourself:

Individual hands – possible combos of each

Pocket Pairs = 6 combos of each

Suited Hands = 4 combos of each

Let’s look at an example flop.  We open AA and get one caller.  The flop comes T92r.  We’re likely ahead with AA, but let’s think about our opp’s range and what possible hands and draws he could’ve hit here and how many combos are possible:

On any two-tone board (2 suits on the board) there are 55 total combos of hands that could have a flush draw.  Calculated as 11*10/2 (11 remaining suits in the deck if two are on the board).  But, that doesn’t mean you have to worry about your opp holding the full 55 possible combos.  You can probably remove weak suited hands like 92s and 53s from their range.  So, on average if your opponent has a fd, he’s likely got about 30 combos there, and that’s dependent on the two suited cards on the flop and the range your opponent plays post-flop.

The concept of card removal is simply the idea that if you hold a card, it’s logical to say your opponent can’t hold it.  It’s a blocker for certain combos within his range.  Let’s look at the same flop as previously, T92r, but this time we raised pre JTo and got a caller:

How to practice combo counting

Here’s my challenge to you for this episode:  Count the combos your opponent might have in this scenario: You open with 88, he calls on the button.  You estimate his calling range as 30% of hands, but he would normally 3bet JJ+ and AK, so you can take those out of his range b/c he just called your open.  The flop comes down 672r.  What hands and drawing hands might he have and how many combos of each?

Send me your answer via email and I’ll reply with my own assessment of his possible combos.  Let’s learn together, you and me, taking our combo counting game to the next level!

Purchase the Hand Reading Lab with my affiliate offer code

I got the ‘Hand Reading Lab’ and it’s the best poker course I’ve ever experienced and I truly feel it’s worth every penny.

The course contains everything you need to master the skill and art of hand reading:

Click here and use my affiliate offer code “smart” at checkout to get the Hand Reading Lab course and as a bonus you’ll get Splitsuit’s popular ‘Playing 3bet Pots’ video series.