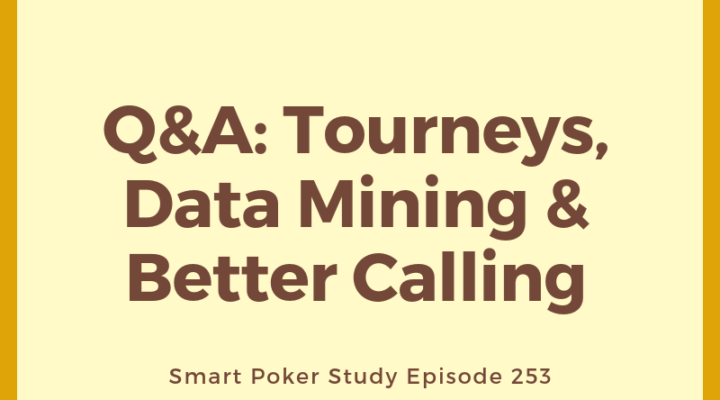 Listen to the episode as you follow along below

I do have a question about tournaments which I play, kind of a classic question probably. I’m sure you have covered this somewhere in your content, but what is your strategy against overly loose-aggressive players?

In general, I try to use their aggression against them.  You want to play IP and be willing to call down with weak TP hands and even 2nd pair good kicker hands.  Some LAG’s are overly aggressive post-flop, so let them aggress against your showdown worthy hand and spew chips your way.  Sometimes they’ll have the goods, but you can often get a clue that you’re beat by their bet sizing or timing tells or how well their range connects with the board.

Because you’re playing tournaments, most of the LAG play you’ll face is preflop.  So, when a LAG comes at you with 2bets or 3bets, start by putting them on a range.  If your hand is strong against their range (like AJ vs AX and KT+ and QT+ and 76+ hands), then don’t play passively but get aggressive right back at them.  If they’re willing to call with weaker hands (your AJ > their A5, T9, KQ, etc.), then this is good for you.  And if they fold a lot, this is good as well.

If you want them to fold vs your bet or raise, make sure they can.  Look at the size of their stack in relation to the pot.  If the pot is already so big and their stack is so small that they would feel “pot committed” by your estimation (low SPR), then don’t bluff but value bet big instead.

Remember the maxim: When they ain’t folding, we ain’t bluffing.

Howdy Sky, I’ve been listening through your podcast library and am really enjoying it, thanks for the poker strategy boost! I’ve been playing in a weekly $1500 gtd tournament at a local card house for the past few months. Last week I made it to the top 3 with payouts being $200, $400, and $800. These guys were very nice regulars who I’ve developed a rapport with, one skilled and the other a self-proclaimed gambler.

My stack was around 3 times their stack sizes and the house reminded us we could chop at any time. They both said they’d agree to it and deferred to the big stack without trying to push me to accept. I suggested that we each take $400 and play for the last $200 since I really want some short-handed experience. I ended up taking it down, but can’t help but feel like all I did was give 3rd place $200 (who literally the next hand busted to me). The final payouts match pretty close to ICM (which we didn’t actively use).

The golden rule of ethics dictates I did the right thing, but my question to you is, is it more important to keep the friendly nature of a LIVE game going at the effective cost of a couple buy-ins, or is it more important to go for blood, look out for your bankroll, and hope the other players take it in stride? Thanks again for everything you do and you’ll be seeing my winnings go towards one of your books in the near future!

This is going to run counter to all you tournament purists and profiteers out there, but I think you did the absolute right thing.  When chopping local tournaments, it probably hurts you to be cutthroat and try to go for every last penny possible.

You hit the nail on the head when you said that you’ve developed a rapport with them.  Because you see them all the time, you want to keep that rapport going, and fighting for every scrap of equity makes 0 sense to me when you’ll be seeing these guys week in and week out (assuming you’ll keep playing there).

But, if you go to the WSOP and get 3-way for the Main Event or a $1,500 tourney, then you’ve got to go for max value because they’re doing the same and reputation/feel good doesn’t matter in this situation.

You did the right thing and I’m happy to hear it.  I like that you went for the short-handed experience.  But, if you wanted to end it right there but squeak out a little extra value, you could’ve said something like, “We can chop if you each give me $75” or something along those lines.  They would accept it and understand it because they would do the same if they were the big stack.

Hi there, thanks for your tutorial/podcast. I just started using a HUD, but from what I understand and can find on the web, you only have data for the hands you’ve played. Are there ways to import more hands or get more data elsewhere about players in my HUD?

What you’re asking about is data mining (getting hands from other sources to input into PokerTracker 4). The poker sites don’t allow this as it gives an unfair advantage. Theoretically, more hands would be better, but we’re only allowed to use hands we accumulate as we play.

The good news is, the more hands you play, the quicker your opponent’s stats will accumulate and you’ll be able to understand their frequencies. Also, some stats like VPIP, PFR, 3bet, Cbet and Fold to Cbet start accumulating early, so even at 100 hands played you have a general understanding of their player style and that’s enough to begin exploiting them.

Ultimately, don’t take part in data mining and don’t buy those hands.  Just develop your own database through more time on the felt.

I am a new player and have just started learning through your books. Is it necessary that we should always start with 3 or 4betting with good hands? Actually, even AA gets sometimes outdrawn by showdown. So, would it not be good to just limp with good hands and raise after the flop or just call 3bets and first see the flop then decide to raise according to the table dynamics and other factors?

No, don’t limp with these hands.  It’s important to start playing the best pocket pairs like KK and AA for a raise and re-raise every time preflop (things change post-flop based on the board and your opponent).  Aggression is important in poker and playing these aggressively will give you a better money-making opportunity than calling with them.

Calling with these big hands are a symptom of either fancy play syndrome (FPS) or a sign of a passive and weak player.  If you begin poker by playing these hands passively, then you will develop a bad habit of passive play and it will be harder to break later on.

Start developing a habit of aggressive play as soon as possible.

Think about what happens when you just call or limp with AA.  You’ve sweetened the pot for all the other passive players to limp behind or over-call, and this just leads to multi-way pots. Sure, your AA is a favorite, but against 3 other players, you’ve got a ton of land mines to dodge post-flop and that makes it more likely somebody will hit 2p+ and crack your AA.

Also, one of the ways you earn money in poker is to exploit players who call too often preflop.  If the weakest opponents will call your raises and re-raises when you have KK or AA, they’re theoretically making bigger mistakes preflop. Help them make mistakes by betting and raising big with the best hands.

Don’t give weak opponents the cheap flop they want.

I am calling too much instead of raising/folding

Yeah, playing too passively is a problem for too many players.  Some treat calling as a default play when they don’t know what to do, or they just don’t want to believe their opponent has a good hand and don’t want to be bluffed.

To help you with this problem, over your next 5 play sessions, before every click of the CALL button, complete this sentence:

“Calling in this spot is a profitable play because ____.”

You don’t have to be able to come up with a mathematically sound reason or an infallible argument.  You just have to complete the sentence with any logical answer before you click CALL.

If you can voice a logical reason for calling, then you’ll make better calling decisions.  If there’s no good reason, just fold instead.

It’s important to remember that when you face a bet, you also have the option to raise. You would raise to bluff them off their hand or to gain additional value when they could be value betting weaker hands.  Before you raise, ask and answer this: “How will they respond to my raise?”  If you reasonably expect them to fold most of the time to your bluff raise, make it.  If they can call or re-raise with worse hands, make the value raise.

Nic Chavez, Matt Ahearn and Trevor Blair picked up the best poker software, PokerTracker 4.  My favorite since 2006!  In appreciation, I sent them each a copy of my Smart HUD for PT4.  Along with the growing database of hands to study, the Smart HUD is a powerful tool in anyone’s poker toolbox.

Kong Li, Johan Rickling, Paul Kennedy and Luke Marrison purchased the Smart HUD for PokerTracker 4.  It’s the best online poker HUD in the business, and you can get the Smart HUD by clicking here.

Thanks to Vince from Denver picked up Playing to Learn: A Micro Stakes Webinar.

Thanks to Kabaruque for purchasing the Finding and Plugging Leaks with PokerTracker 4 Webinar.