Always respect the math! Poker’s one big math problem and in this article, I show you the critical importance of 4 poker math concepts. Applying these mathematical bad boys will improve your profitability.

Listen to this podcast episode as you follow along below:

The idea for this article came from a 1-on-1 coaching session with a long-time student named Keith. We were reviewing his recent losing hands and one stood out to me. I questioned him as to why he would play a starting hand as weak as J7s. He said he’s trying to get heads up against every weak player that he has ∅ respect for, and sometimes that means playing really crappy hands.

I whipped out Flopzilla Pro and showed him the equity his J7s had against this player’s calling range… and it was bad. He was a big-time dog and in the long run, it’s going to be tough for him to make J7s profitable with such a preflop equity disadvantage.

Respect the Math of Ranges

Playing with stronger ranges than your opponent gives you a mathematical edge that in the long run, they’re can’t overcome.

How do I know this mathematical edge exists? I do range versus range analysis with Flopzilla Pro, as demonstrated in this video: 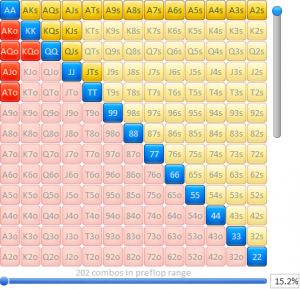 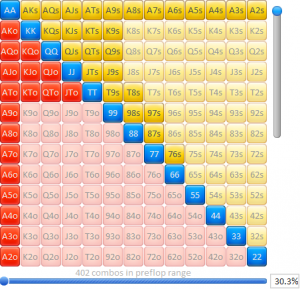 So, your average opponent plays about double the hands you play, which makes their 30% VPIP range much weaker than yours.

In Flopzilla Pro, using the “multi-player mode” (red circle below), you can pit the 15% range versus the 30% range and you’ll see this: 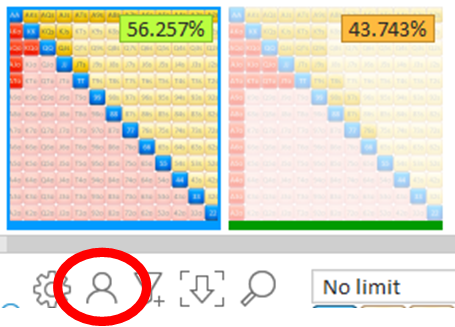 Wow, your tighter range gives you 56% preflop equity (rounded) against them. What does this mean?

It means the math is on your side!

Vegas casinos built their billion-dollar empires over the long run with a 1-5% edge in their various games. You hold a 12.5% mathematical edge against your opponents (56.257% – 43.743%). In the long run, they can’t beat you! (assuming you’re making good post-flop decisions)

Tighter ranges give you an unbeatable mathematical edge in the long run.

Do you want a mathematical preflop edge against your opponents? Get the Kiss Cash Game Ranges here:

Respect the Math of Position

You probably know that position is king. But, do you play with this in mind?

Filter in your PT4 database right now for Saw Flop In Position and record the # of hands and your win rate:

Now, run a filter for Saw Flop NOT In Position and record the # of hands and your win rate:

Most likely, you’ll find your win rate is much higher when in position (IP). Why is this? Because:

With position you have more information to work with and your opponent has to contend with your positional advantage on the flop, turn and river. When IP, it’s easier to pot control, easier to bet or raise for value and it’s easier to bluff.

And you might not realize this, but being IP gives you more time to think about the situation when you’re in. When they act first, the time they take to make a decision is a gift to you. You have extra precious seconds to think about things like range/board texture interaction, their tendencies, the stack and pot sizes and all other important information.

How often are you in position on the flop? If it’s not at least 40% of the time, you’re not striving to play in position as much as possible.

Why the heck aren’t you?!

You see that mathematically, IP > OOP, so if you want to make poker easier on yourself, more enjoyable and more profitable, you MUST strive for IP play as much as possible.

This means you’ll play tighter in the early positions and call less frequently from the blinds, even if you’re up against a weak player who you have ∅ respect for.

Respect the Math of HUD Statistics

Your opponent Folds to Flop Cbets 70% of the time? Why didn’t you cbet bluff the flop just now? I understand if you flopped the nuts and don’t want them to fold, but most of the time you’re not flopping the nuts and you fail to flop a pair or a draw. You should be firing flop or turn bluffs when they’ve shown a tendency to fold. The math of their flop folding tendency is on your side.

Should you still cbet the flop for value even if you flop a monster? Totally because…

“Get value while the gettin’s good.”

You flop TP or better and you’re up against a player who, the math shows, only folds on the flop 45% of the time? You’ve got to value bet here. Sure, you might flop quads 5’s on the 655 flop and you don’t want your opponent to fold so I can go along with checking one street.

However, what if you’re against is a strong and capable player with 55 on the 655 flop? They’re looking at that flop and the math is telling them it’s a hard to hit board. If you bet into them at 1/2 pot, they might think you’re bluffing and they can call with their 2 overcards (KT, QJ, etc.). Or maybe, they’re capable of bluff-raising on hard-to-hit boards. You bet 1/2 pot, they think they can hit your pain threshold by 3x’ing you and bam! Your tiny 1/2 pot value bet gets at least 3x value. You can now either call or re-raise, whichever you think will earn you even more chips.

The Math Helps you Listen to What Their Actions Tell You

If you’re on the BTN and hold ATs and the BB 3bets you, what do you do? First, you look at his positional 3bet % in the BB. If it’s only 1% over 100 opportunities, the math is telling you he’s doing it with AA or KK only. Easy fold.

However, if the math is telling you he 3bets from the BB 15% over 100 opportunities, he’s got loads of bluffs in his range. Folding is still an option if you want, but you’ve also got the option to call with ATs which is ahead of some of his bluffing hands, plus you’ve got position. Or, you can 4bet re-bluff him off his BB 3bet stealing range. If you’ve seen him 3bet/fold a few times from the BB, the math is again on your side and he’s likely folding. Just size your 4bet big enough to hit his pain threshold and get him to fold.

Respect the Math of Your History

Let’s dive into your PokerTracker 4 database of hands. Filter through your last 20,000 hands and record the # of hands and win rates for:

Run 4 more filters and record the # of hands and win rates once again:

I’m pretty sure you’ll find that making the cbet is more profitable than calling the cbet. So, stop calling so much preflop which gives your opponents the opportunity to cbet into you. Another way to look at this, be the preflop aggressor so you’re the one making cbets, not facing them.

Respect the math of Aggression > Passivity.

“In the long run, a respect for the math paired with good decision-making skills will make you a winner.”

Here’s my challenge to you for this episode:

Get the KISS Cash Game Ranges (above) and print them out. Do it now!!! These will give you a mathematical edge against most of your low and micro stakes opponents. The ranges come with directions to help you learn them. I recommend playing with them through your next 5,000 hands. Good luck!

These super poker peeps picked up my first book: JV, Simone Leiter, Mr. Baby Bigz, Raul Mirabel and Jarvi Jyri. They got How to Study Poker Volume 1 in PDF, audiobook or they saved $$$ by getting both.

And Byron Hernandez, David Backham, Bret Burns, Jarvi Jyri and Mr. Baby Bigz picked up How to Study Poker Volume 2 direct from me as well. You’ve got your choice of PDF, audiobook or save $$$ by getting both.