I discuss how to learn all the stats in your poker HUD and practice exploiting your opponents with it.

In episode 223, I discussed using the check-raise for extra value and bluffing your opponent off their hand.

A poker HUD can be an effective tool in exploiting your opponents, but many players fail to take the time to learn to use it properly. It’s just a confusing jumble of numbers for many players because they’re not willing to put in the time or effort.

I believe that humans learn best in 2 ways:

Here’s my challenge to you for this episode:  Over the next month, you will choose one poker HUD statistic to focus on for each play session. Do not move on to another statistic until you feel comfortable with the first.

As your pre-session warm up, in your poker journal (get my free 21-page Poker Journal to use as your own) write down these 4 things about the statistic you are focused on:

Your task is to interpret the statistical value every time a player makes a play related to that statistic, and if it’s a +EV situation, exploit it.

Tag and review all important hands.

Focusing on one small piece at a time allows you to learn in a systematic order where the next piece builds upon the prior pieces.

When you first installed your poker HUD, you probably had the idea that your HUD will tell you how to exploit your opponents. But I’m sure you realized within moments that the only thing a poker HUD does is tell you how often your opponents make certain actions.

The trick is, you need to interpret the numbers in a way that allows you to make +EV, exploitative decisions.

With all the numbers glaring at you from your computer screen, how to do you learn each of them?

First, you start with preflop stats then work your way to the post-flop stats. Here’s the list of stats within my Smart HUD and the order in which I recommend you learn them:

In the Challenge above, there were 4 things you need to do to learn each stat. I’m going to cover each of those in detail with a stat taken directly from my Smart HUD; Raise First In (RFI).

A. Know the Definition

Every statistic in your poker HUD has its own definition. PFR is slightly different than Preflop 2bet which is also different than RFI. But, they’re all related. You poker tracking software should have a list of definitions for you to use.

For your stat focus, read the definition and write it out in your poker journal to ensure you grasp the differences between it and other related stats.

According to PokerTracker 4, RFI is defined as the “Percentage of the time that a player opened the pot by raising, given that he had the chance to do so.”

B. Know the Formula

Your poker tracking software should give you the formula as well. Write this out so you fully understand how it is calculated. This may give you insights into what you can use the statistic for.

The formula for RFI:

C. Know the Meaning (put it in a real-world context)

A statistic’s meaning is not the same as its definition. The definition is just what the statistic tells you.

A statistic’s meaning is what you can take away from the number presented; it’s the knowledge about your opponent that the statistic communicates to you.

With every statistic, I try to put it in a real-world context.

But, what if their RFI was 60% in the CO? This means they Raise First In 60/100 opportunities. Do you RFI this often? Probably not, so this tells us that this player likes to play a wide range of hands and plays them aggressively in the CO.

Now that we know the meaning of these 2 different RFI percentages, we can approach playing against these 2 opponents differently. For example, we can probably 3bet bluff against one of them more profitably than the other.

Every statistical percentage is exploitable in some way. EVERY single one.

You can exploit statistics by raising, betting, calling, folding or even checking. When you know the meaning of their statistic you can figure out an exploit against it.

I alluded to it already, but for those 2 different CO RFI percentages of 20% and 60%, we would probably want to 3bet differently against these 2 players.

Against the 60% RFI percentage, we can potentially 3bet bluff more frequently. At 60% of the time, their RFI percentage has a lot more junk like J6s, T8o and K2s in it. They’re likely folding a lot of these crummy hands versus your 3bet.

Against the 20% RFI percentage, you might want to be weighted more towards value with your 3bets as opposed to bluffing. If you do 3bet bluff, it may be a good idea to use Ace-blocking hands to limit the number of strong AX hands in their range.

Of course, all this statistical learning won’t do you any good if you don’t utilize the poker HUD in-game and base some decisions on the numbers you see there.

By focusing each session on just one stat, the experience of repeatedly looking at that statistic for each of your various opponents is great. You’ll force yourself to gauge what their different percentages mean, and think about the ways in which you can exploit those percentages.

Here’s a 6-max table where every opponent has a different RFI percentage in my Smart HUD. We’re going to ignore the sample sizes for now and just look at the percentages. I’ll cover sample sizes and the number of hands needed for good reads in this podcast episode: HUD Reliability: Number Of Hands And Sample Sizes.

Let’s look around the table: 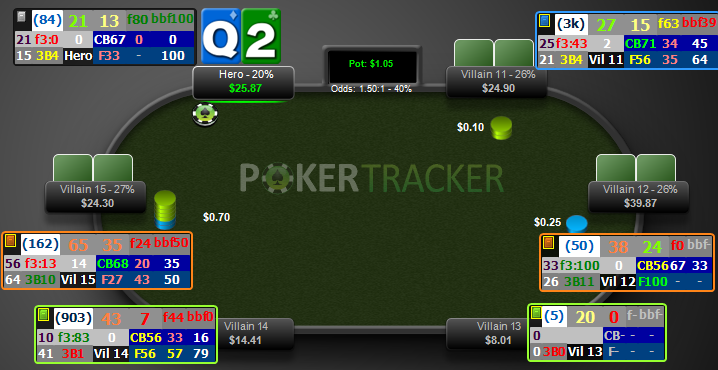 Their RFI is at 25%. By raising first in 1/4 hands they have a relatively tight open-raising range. This is pretty good news because has ultimate position but he’s not super aggressive. Hopefully, when we raise first in, he won’t be actively 3betting us.

Their RFI is at 33%. This indicates a rather wide RFI range (anything over 30%). We may be able to exploit their LAG tendencies by 3betting them from the SB if they open/fold a lot from UTG.

This one has a RFI at 0%. We’ll exploit this by giving any preflop raise the respect it deserves.

This player is 2 to our right, so we’ve got great position on them. Their RFI is at a small 10%, meaning we need to give their raises respect as well. We can call with speculative hands that can crack big hands, and 3bet large with KK or AA knowing they have a hand that might play back at us like AK, QQ or JJ.

With the largest RFI at this table of 56%, it’s great that we have ultimate position on them. They play so many pots that we can 3bet wider for value if they open-raise/call a lot, or 3bet bluff them very wide if they fold after raising a lot.

At a RFI at 21%, the rest of the table can expect us to play a TAG style like the player in seat 1. We can exploit this by trying out a few more aggressive bluffs, especially with position, and if they give us any respect at all, we’ll have more fold equity.

Is this a +EV Opportunity to exploit?

UTG and MP folded, then Villain 15 in the CO raised first in to just under 3bb’s.

We know they RFI at 56%, so it’s a good player to 3bet against because they’ve got such a wide, weak range.

But, there are a couple things going against us on the BTN here:

Now, I would 3bet here with 88+, A9s+ and ATo+, QJ+ because I believe he can call with plenty of worse hands. I would also call here with smaller pp’s, lots of sc’s and suited-gappers as well as some suited-Aces and Kings. But, we’ve just got the Q2o, so I’m folding here and watching the action play out.

Bud Kincaid and John Whelan purchased PokerTracker 4 through my affiliate link.  These two are soon to learn all the benefits that come with using a HUD (I sent them my Smart HUD) and having a database of hands to study.

Paul Spillane and Vidar Sorenson purchased the Smart HUD for PokerTracker 4.  The HUD comes with 16 stats and 6 custom popups along with specialized color coding for the most useful stats.  It’s perfect for getting the most from PokerTracker 4 and your online play.

The ‘Profitable Bluff Cbets and Double-barrels Webinar’ was great last week.  A lot of people purchased it: Luigi Cappel, Vidar Sorenson, Oliver, CJ Bell, Chris Morgan, Johan Cedarlund, Ludo Vissar, Bud Kincaid and LTU Maximus.  Thanks for purchasing and attending the LIVE webinar.  It was a ton of fun, and I hope you’re pulling off more successful bluff cbets and double-barrels than ever before.