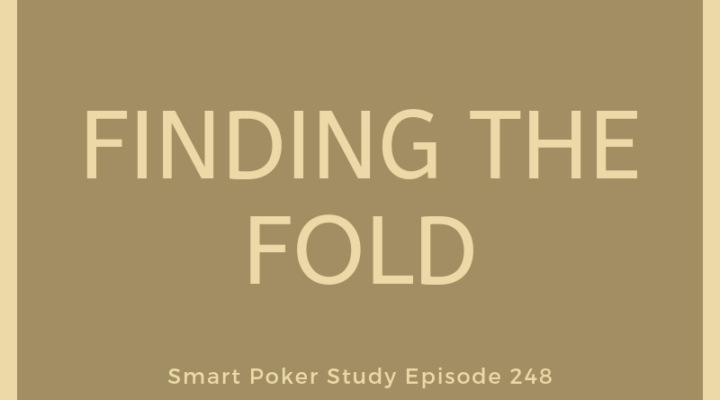 I discuss the importance of being able to fold with made hands when you know you’re beat.

In case you missed episode 247, I discussed the 3 most important training strategies that micro stakes players must do.

Here’s my challenge to you for this episode:  Stop calling when you know you’re beat. You often do it in hopes that your 1 pair hand is good or that your opponent is bluffing. When signs point to your hand being beat, just fold and avoid giving value to your opponents. You’ve made these losing calls too many times, and for the sake of your bankroll and your sanity, stop it.

Calling Keeps You in the Micro Stakes (2:55)

We all know aggression wins in poker, but what does that mean for the passive play of calling? Well, just the opposite: calling doesn’t win in poker (in the long run). Calling is simply hopeful poker: you’re hoping to win at showdown or hoping that you hit a strong hand on the next street.

Aggression on the other hand, with bets and raises instead of calls, gives you an additional way to win the pot by getting your opponents to fold.

What’s a good fold? A good fold is one that saves you money.

A penny saved is a penny earned in life and business, and it’s also true in poker.

Who are the “marks” at micro stakes tables? Mostly, it’s the Fish. They’re the ones you’re always trying to play hands against.

And what makes a Fish a Fish? It’s all the calling they do.

They call too often preflop because:

They call too often post-flop because:

Most of the time, our bad calls are with either a draw or some sort of weak showdown worthy hand like one pair.

For the rest of this podcast, I’m going to discuss folding pairs or better when you know you’re beat.

Folding draws is relatively easy, especially once you understand and practice outs and odds math. I’ll save that for a future episode.

Calling with a worse made hand is where we lose most of our money:

Folding isn’t glamorous, but there are benefits (6:45)

If you watch televised poker, the most exciting moments are the big bluffs or the crazy suck-outs or somebody getting fooled into bluff shoving.

But, folding is never glamorous. There’s nothing exciting there (except for the other person when they pull off a great bluff).

I ran a report to find winning players with over 3,000 hands in my database.

Yep, you’re folding. These winning players are folding preflop anywhere from 70% to 89% of the time.

If I look at the winningest players in my database with a win rate >10bb/100 hands with at least 3K hands, they fold between 71% and 81% of the time preflop. Let’s just average that and say 75% of the time they’re folding, which means they fold 3/4 hands dealt to them. That’s a lot of folding, but it leads to winning poker.

How often do you fold preflop?

Just look at your VPIP and subtract it from 100%. That’s how often you fold. If you’re a constant loser at the micro stakes, my guess is you fold maybe 65% of the time or less. That means you’re VPIP’ing way too much and you must be more selective in your preflop hand choices.

Out of these 32 winners:

How often do you fold on each street vs an initial bet or vs a raise? Is it more or less than 50%? If less, you’re probably not folding enough and your stationy tendencies are leading to losses.

Folding allows you to exit the hand, but you’re still there to learn from it. You aren’t required to get to showdown to learn from a hand, you just need to observe it.

In LIVE poker, make sure you continue watching the action and learn how your opponents play.

Of course, online players should do this as well, but it’s tough when multi-tabling. That’s where database and hand history reviews with PokerTracker 4 come in handy. It saves the details of every hand for you. You just need to take the time to review your database in a study session and do hand reading exercises.

The break-even point is where your expected profits from making a play are equal to your expected losses in the long run. So, if you ran a break-even call 1M times, you’re making (or losing) $0.

You can use break-even calling math to help you make better calling decisions. Here’s the formula:

You can calculate the BE Calling Point every time you consider calling, but there’s a mathematical consistency here that makes it unnecessary to do so every time. the Break-even calling point is the same every time based on the size of your opponent’s bet in relation to the pot: 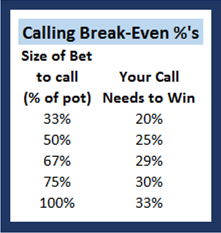 Every time you face a 50% pot-sized bet, your call needs to win 25% of the time to break-even.

You know that you’ve made the same type of mistaken call over and over again. And I don’t mean mistaken call like you mis-clicked. No, you made a call that you should not have made. All the signs were there that you were beat.

You knew in your gut that they just hit there straight or their flush or they had a better 2p hand to beat your hand.

But what happened? You ignored your gut and your pride and maybe your heart took over and forced your finger to click CALL instead of FOLD.

Or, maybe you just haven’t learned your lesson yet even though you’ve made these failed calls time and time again. So, I’m gonna help you finally learn this lesson.

If you go to the show notes page for today you will find three different screenshots for filtering through PokerTracker 4 to find common terrible calling spots. I recommend you follow along in your own database right now as I discuss each of them. You’re probably gonna find that you are a big loser when making these common calling errors.

#1. Double barrel cbetting then calling a river bet with a one pair hand 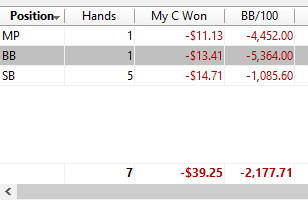 In this situation, your opponent called the flop and turn (slowplaying a big hand or drawing) then they lead out on the river.  They finally bet here so they don’t miss out on value.

#2. Bet then calling a raise on the turn 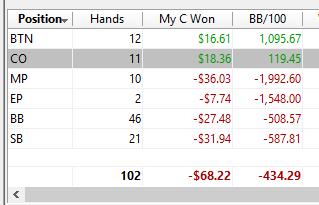 Not the worst win rate, but pretty bad, especially when in the EP.

When I changed the filter from calling the raise to re-raising, my results were much different: 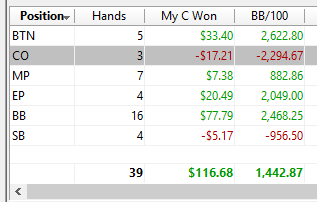 Add different hand categories one at a time

Which hands are costing you the most money? Which ones should you never 2bet then call 3bets with ever again?

Make note of any mistakes you catch so you can work to not repeat them in the future.