Peter “Carroters” Clarke returns for his 2nd visit. We discuss GTO poker and how his eMagazine, “PIO vs. Population” uses GTO solutions to exploit Villains.

In episode 210, I discussed 7 tilting situations, the math behind each and what you can do to respond effectively to each.

Since our last talk (episode #174), Peter’s been doing a ton of coaching 10nl to 200nl students and playing a lot more. He’s a 4-tabling Zoom player on PokerStars in the wee hours of the morning. He’s used GTO solvers to solidify his 100nl strategies so he’s a very solid winning player right now.

Even though he plays Zoom, he knows what to look for to differentiate the regs from the fish (plays made, bet sizing, stack sizes, etc.). He’s worked on a default game against the regs that differs from his default game versus fish.

Peter knows that a good regular table player will have a higher win rate than a comparable Zoom player. But the Zoom player is playing so many more hands that their hourly win rate ($/hour profit) could very well be more.

Zoom removes “vengeance” tilt from a weaker player’s game because the player who “wronged them” is no longer at their table in the next hand. This is one aspect where regular tables may be more profitable for the experienced player who knows how to spot and exploit tilting players.

He does this via coaching (80%) and playing a lot (20%). When he goes through a student’s database, he gets a sense of how the players at those stakes play.

Coaching different players gives you insight into the way they think about poker.

This is checking to them and allowing them to do the betting.

If they can’t help themselves and they just can’t stop being aggressive, we have to allow them to bluff at pots while we call down with bluff catching and blocking hands.

Don’t feel the need to cbet just because you are the preflop raiser. When you hit a good hand, sometimes check to them and let them commit money to the pot for you. Remember, they can’t but help to show aggression, by checking you give them rope to do so.

Let the maniac go first and then do some attacking. You’re gonna have to mix in some folding as well. You can’t just call the flop with the plan to fold on the turn, because you know they’re going to barrel the next street. If you think you’re going to have to fold, fold earlier on the flop.

Isolate the fish with a large size. Try not to share these fish with other players. If a weak player opens the pot, go ahead and 3bet isolate with a wide range. You might be behind against his open raising range in terms of equity, but his lack of skills and potentially being out of position post-flop will more than make up for this.

A majority of your bets should be for value, and if you have to bluff, choose bluffing hands that contain good drawing equity. 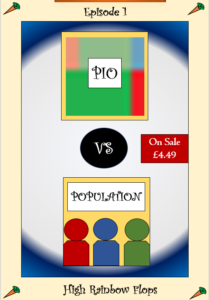 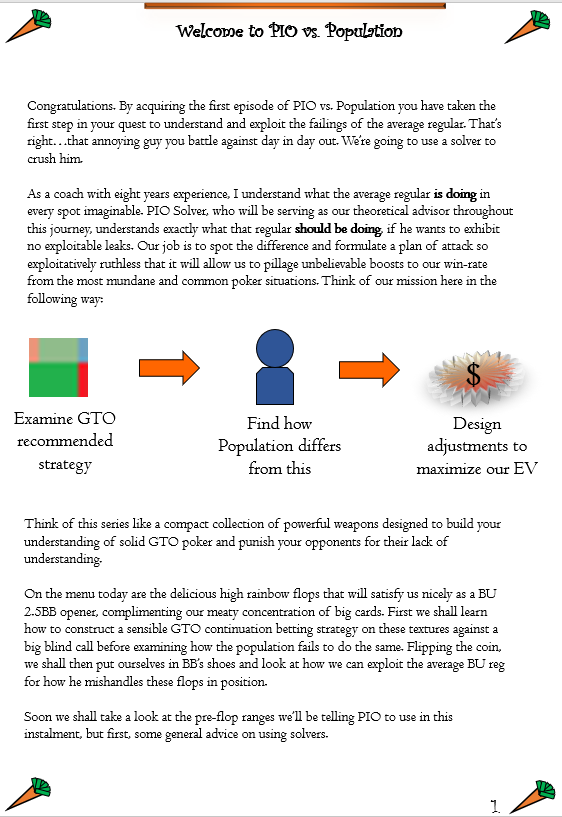 GTO stands for “game theory optimal” and it’s a mathematical solution for poker. Solvers, like PIO Solver (https://www.piosolver.com/), take 2 optimal players and pit them against each other until it arrives at a solution which is in equilibrium between the 2 players. At equilibrium the players can’t improve their strategies any further.

GTO solutions are far too complicated for humans to do, so there’s no worries about your opponents playing an optimal strategy that you can’t exploit. But, we should like the idea of solvers because they can show us general patterns that we can learn from to make our play better or to exploit our opponents.

In the first episode of PIO vs. Population, he talks about how the population handles a KQJ board. The PIO solution to this problem shows us how we can play this board a little bit better.

For example, PIO Solver recommends to bluff bet with small pocket pairs. Most reg players wouldn’t be making this play. As the preflop raiser, their likely just checking in that spot. When they don’t bet this spot they aren’t getting punished enough, and this is what we can do now against the preflop raiser. We can exploit their infrequent bluffing by betting when they check.

With PIO vs. Population, Peter is trying to make GTO solutions accessible the players at any level. He removes the unnecessary information that clutters analysis, and tells the audience the most necessary parts to help them play better and exploit their opponents better.

The GTO Solution for BTN vs BB on KQJ Flop

This PIO solution gives you an idea of the best plays that you can make in a given situation against regs who know what they’re doing. It’s unrealistic to think that you can actually play in a way that it recommends. The solutions give you a start, now it’s up to you to use that information along with specific player reads to make exploitable plays.

Episode 1 Example: The GTO solution shows us that small pocket pairs should be cbet as bluffs on the KQJ board. But we know that most players at our stakes will not bet that hand, but elect to check behind instead. So, we can exploit this knowledge by probing the turn when villain checks behind on the flop. They’re not bluffing enough and this gives us an opportunity to steal the pot as the big blind caller.

And another exploit we can use on the flop: because they don’t bet often enough, when they do bet, they have some sort of showdown equity most likely. Because of this, we can make an exploitative fold with our weakest hands.

PIO Solver utilizes SPR in its calculations to govern what decisions are possible for the two opponents. The shorter the SPR, the less options are available. PIO adapts its strategy to the SPR in order to make optimal decisions.

Every episode is going to look at 100 big blind stack situations. The reason for this is we are concerned with utilizing GTO to exploit our reg opponents, and most regs are playing at 100bb stacks or more. The fish do not play anywhere near GTO, so there’s no need to run solutions with smaller than 100 big blind stacks.

PIO vs. Population is perfect to use against regs because they’re playing well, but not as well as they should be. PIO finds the solution, then Peter takes that information and shows you how to use it to exploit the regs.

This is the “heart and soul” of PIO vs. Population

The Observations section tells us how we should play the situation and they’re often pretty intuitive to grasp. The Revelations on the other hand, are things that are less obvious but they reveal to us how the population doesn’t play like PIO Solver.

The Revelations change based on the situations and inputs, so future episodes will look at more Revelations in how the population differs from GTO play.

1. Be aware of who you’re up against. If they are a complete fish or maniac, we may want to deviate from GTO strategy. But if we're up against a thinking opponent, then deploying our observations and our revelations could be profitable.

2. We want to simplify the GTO solution into easy to understand and easy to implement actions. So, if you know a specific situation is under-bluffed by the population, you should choose to add bluffs you would normally not make, and you should find ways to exploit your opponents who aren’t bluffing enough. You don’t need to remember to “bet 44 84% of the time”.

3. Create a PokerTracker 4 tag to use every time you are in this situation. Tag the hand so that you can review it later regardless of whether or not you employee your exploit. This is something that we should do with every new strategy we learn so that you can practice the strategies and then review how well you implemented them off the felt. The only way for us to really improve our skills is to take the time to study situations off the felt and to produce our own conclusions based on practice and study.

Double Studying Hands: Study 10 hands revolving around one situation or skill and take note of what you learn from the hands. In 3 days, go over the same hands again and see if you do a better job analyzing them and coming to profitable conclusions.

Here’s my challenge to you for this episode:  Visit www.carrotcorner.com. While there, sign-up for his newsletter at the top of the page, then click on the “PIO vs. Population” link. On the next page you’ll learn a bit more about the first episode and what to expect from future ones. You can also purchase it for 4.49 euros. Next, go to www.PIOSolver.com to learn more about that program and download the free version if you’re so inclined.