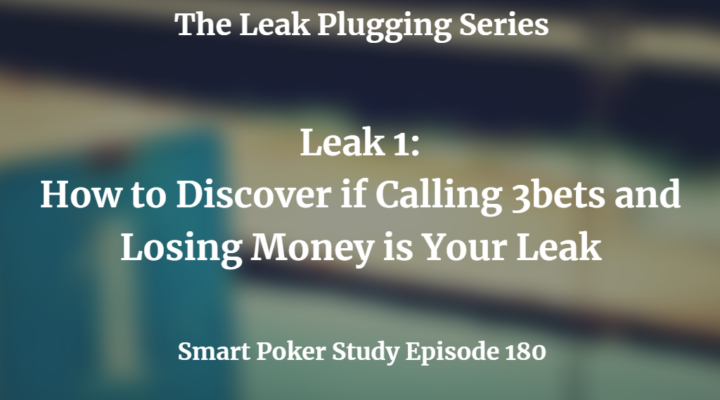 I discuss the leak of calling 3bets and losing money: the symptoms, how to diagnose and the statistics that help you track your leak plugging progress.

In episode 179, I answered 4 Q’s about analyzing win rates in MTT’s, developing study discipline, practicing equities and playing the player.

3betting is an intrinsic part of pre-flop poker, and for good reason. There are 3 benefits that come with 3 betting pre-flop:

Due to these benefits, players 3bet a ton, so you must learn how to defend against them.

You have two choices when defending: 1) 4bet or 2) Call. Many players 4bet with a very small range, something like QQ+ and AK. For most open raising ranges these 4bet hands are a very small part.

So, what do you do with the rest of the hands? The good broadways, pp’s, suited and off-suit Aces, or the suited connectors and gappers?

If we don’t want to defend with a 4bet, the next option is to call. The thing many players don’t realize is that calling pre-flop caps your range to weaker holdings. Calling puts you at a range disadvantage in the hand. But, it is a necessary evil as calling has to be part of our strategy. You can’t simply raise or fold every hand you play.

Players get into danger versus 3bets by calling too often and seeing flops with weak and easily dominated hands. This pre-flop mistake leads to more post-flop mistakes, and losses due to mistakes are compounded in these bigger 3bet pots.

Your leak is NOT because you’re raising then calling 3bets. That’s a necessary part of poker. There must be some -EV aspect to your 3bet calling decisions.

As you go through each individual hand that comes through in the above-mentioned filter, look for the following 3bet calling aspects to try and diagnose the real issue behind this leak.

Go through the filtered hands by position to see if you’re straying outside of your open-raising ranges. Some players compound an open-raising mistake by calling a 3bet with a hand they shouldn’t have played in the first place.

As you review these hands by position, calculate how much you lost due to the poor hand choices you made. For example, out of 8 hands in the MP, two hands were outside of your open-raising range. The losses suffered from these hands were 58bb’s. If you had just folded instead of raise/calling with them, your bankroll would be 58bb’s richer right now.

Look at the specific hands you chose to call 3bets with. You’ll likely find many outside of your normal calling ranges.

I bet your ranges are mathematically sound (+EV) and based on the position and type of 3betting opponent you’re facing.

Take note of non-range hands you chose to call, and determine why you made the call. Was it out of spite? Were the pot odds being offered too good to pass up? Was it a lapse in judgement? Were you taking advantage of an exploitable aspect of the opponent?

Position is a critical factor in any pre-flop decision. When calling a 3bet from OOP, you must have a tighter range to make up for the positional disadvantage you’re in. You can call slightly wider when IP because you’ll have more information to act upon through the streets.

The hand strengths of my OOP 3bet calls are generally much stronger. I’m calling towards the top of my opponent’s 3betting ranges, which makes for better pre-flop equity and a greater chance of earning their chips post-flop.

The 3betting opponent is a critical factor to consider before calling a 3bet. You must have a good idea of their 3bet frequency by position and be aware of how they will likely play on the flop. Flop Cbet is important, both IP and OOP, as is their Cbet in 3bet Pot %. To make the best pre-flop decision, you need to know what to expect out of this opponent post-flop who has the stronger range and initiative.

5. The Reason You Called

There are great reasons to call 3bets: a strong holding; good pot odds being offered for a speculative hand; an exploitable opponent; etc.

There are also potentially bad reasons to call 3bets: out of spite; tilt; because you just don’t want to fold; bad set-mining odds; your J8s can flop a miracle flush or straight; etc.

As you review your hands, assess your reason for calling instead of 4betting or folding. Take note of the mistaken calls you made and review each street of those hands to learn from them.

This is when you make a call knowing that it’s -EV in the long run. This often happens when you’re tilting, you hate the 3bettor or you’re trying too hard to win pots.

Take note of any mental game lapses in judgement so you can correct these issues. Awareness is the first step in fixing your mental game. When you know your issue, you can put into place things that correct this behavior for future play sessions.

Over the coming weeks as you play and study with a focus on making better decisions when facing 3bets, there are some statistics and win rates that will tell you how you’re progressing. Record these numbers in your poker journal now for the timeframe that you’ve been analyzing. At the end of each week of play, you’ll record these numbers again to gauge how your play is adjusting.

You can easily find these statistics in your poker tracking software. The win rates will have to be found by filtering with the designated play in mind.

If you don’t know these statistics already, do a bit of research in your poker tracking software. To get the most out of tracking these statistics, you must know their definitions, how they’re calculated and how to filter for each specific circumstance.

Here’s my challenge to you for this episode:  Track these quantifiables, even if this isn’t a leak of yours. Just track them, because they might reveal issues you’ve overlooked until now. Start with recording the quantifiables for your prior 20K or more hands, then track at the end of this week and the end of next week.

Michael Matteo completed his own 66 Days of Hand Reading Challenge and his game’s all the better for it.  Congrats, Michael!  If you want to follow in his footsteps, this video series on YouTube will help: click here.

Wu Tsai-Wei, Michelle Bredice and Whigguah purchased my Smart HUD for PokerTracker 4.  If you play with them, stay away… stay far away.  Get the Smart HUD here.

Matt Culling also supported this past week by picking up a copy of PokerTracker 4.  Go here to learn more and get your own copy.  PokerTracker 4 affiliate link.

And, Dustin Rivait is upping his study skills with my How to Study Poker Webinar.  Study smart, Dustin.