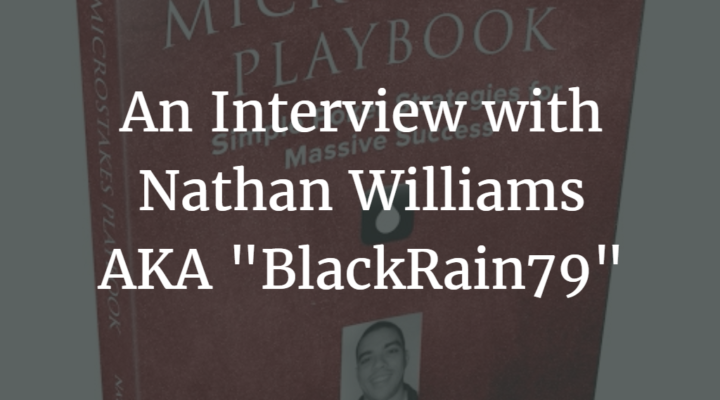 I interview the winning-est micro stakes player of all time, BlackRain79.  We discuss microstakes strategy as well as his latest book, The Micro Stakes Playbook.

In episode 161, I played some poker mindset segments from my short-form podcast.  Listen to that to get ready for MED #10 which starts next week.

It was great having Nathan on the podcast this week.  I’ve been following his articles and videos for a very long time and have learned a ton from him.  Here’s what we discussed:

Within 2 years (2007) he was playing at 100NL and decided to quit his job and go full-time!  He’s been playing here and making good money ever since, bouncing back and forth between 25NL, 50NL and 100NL.

His playing time at these lower stakes gives him an advantage as a coach over those who never play these smaller stakes.  He learns things from Doug Polk for example that he himself would never use at the 25NL tables.

Studying Poker Back in the Day

His studies mostly revolved around playing.  But, when PokerTracker first came around it changed things.  It allowed him to finally begin reviewing hands from his database.

He also learned from some old Limit HE books by Sklansky and Miller.

Around 2009, Nathan started to get involved with training sites and forums.  He became a coach at Drag the Bar and made over 100 training videos for them.

His time coaching has helped him improve his game.  Being a coach, you’ve got to explain the WHY behind what you’re teaching them.

He doesn’t coach anymore, but his coaching sessions were 50/50 sweat reviews and database reviews.

Click here to tell Nathan you heard him on the show

Playing is key, and reviewing every one of your sessions is important as well.

Watch players on Twitch and watch videos on YouTube as well.

This book is about 21 different plays, organized by street, that he uses to profit at the micro stakes.  He wrote this book with the idea that players can read it and take what they learn directly to the table and use it to improve their results.

The sole intention of this book is to get you winning at the tables.

He only sells his book via his website (www.blackrain79.com).

He includes great example hands for each play that clearly show you how to use the play at hand.

He recommends that as you read play by play, you should be utilizing the plays in your sessions.   That’s what I’ve been doing.  I’m studying one play at a time and actively finding spots to use it in my next 3 sessions before I move on to the next play.

How to Use Opening Ranges

You’ve got to take into account who is at the table with you.  Play more hands if against plenty of nits, play less hands if you’re surrounded by aggros.  In the book he discusses how to adjust your play based on your opponents.

Plugging My Leak of Folding to Turn Bets Too Often

Don’t make drastic changes to my folding stats.  Look for gradual changes and assess how they’re affecting my profitability.

Keep folding vs the Nits who show aggression on the turn.  Choose the TAG’s and LAG’s to continue against their bets.  Work in some more double-floats and seeing how they act on the river.

I should also be throwing out some more bluff raises, especially with equity like overcards and draws.  Don’t throw out the stone cold bluffs.

I can be calling more often with made hands like TP-ish hands vs LAG’s and TAG’s who can be betting with less than that.

At 10NL and below, you might not want to increasing your bluffing.  At 25NL, things start to feel more like real money, so it’s better to wait until this level to employ it.

The player and the board runout are key.  Look for players who fold a lot, so their WTSD stat would be 23% or less.  You also want to see bigger cards on the turn and river like Kings and Aces.  When you barrel on these bigger cards, they’ll be more likely to fold vs your continued aggression.

Be aware of how your opponents will start to view you if you do this too often or if you get caught bluffing.

You’re risking so much money, make sure the situation is perfect before you attempt this.  Right opponent, right board, right image.

Gideon Nel purchased the ‘How to Study Poker Webinar’.  He’s working to improve his game with better study techniques and habits, and this webinar will help him with that.  Get your own access to the HTSP Webinar here.