I’m going to help you learn to use a heads up display with my stripped-down, simplified KISS HUD for online poker.

It’s called the KISS HUD because I’m a huge fan of the KISS Principle: Keep It Simple, Stupid! This 10-element HUD makes it easy to avoid overwhelm while learning to use a HUD to exploit your opponents.

Listen to Podcast Episode #291 about using the KISS HUD:

I love HUD’s. I tell everyone that they must get PokerTracker 4 and use a HUD to help gain additional information on their opponents. Information is power, and HUD users have more information than non-HUD users do.

Of course, I recommend my Smart HUD for PT4 (comes with a 1.5 hour instructional webinar) above all others. But for beginning HUD users, it can be a bit daunting with the 18 elements in the HUD and the 7 custom popups. Trying to learn to use a robust HUD like this often leads overwhelm.

Follow along in PokerTracker 4 and create your own KISS HUD with this video:

Now that you’ve created your own HUD, let’s dive into how you can use it to exploit your opponents.

The 10 Elements of the KISS HUD

Voluntarily Put $ in the Pot lets you know how active an opponent is. This guy is pretty tight because 13% as a total is only 1/8 hands played. So, he’s likely a TAG or Nit. This information is useful, but it needs to be coupled with PFR for maximum effectiveness.

Pre-flop Raise is an indication of how aggressive an opponent is because it accounts for every type of preflop raise; open-raises and isolation raises, 3bets and 4bets or higher. At 12% total, that’s an average range of 77+, A2s+, AJo+, KQ, KJs, QJs and JTs.

Tight Terry is a 13/12 player. The 1% gap between VPIP and PFR tells us that he hardly ever calls preflop. So, what hands does an infrequent caller call with? Pocket pairs for set mining and the strongest broadway hands. So, if he calls your cbet on a QJ2 board, it’s more likely he’s holding some broadway hands (he’s quickly folding 44 and 55). If he calls on a 236 flop, then he likely has a set, an over pair with 88 or a draw with 44 in his range.

3bet’s happen more now than ever before, so this is a very useful stat. Anything greater than 6% and you’ve got a 3bet bluffer on your hands. Most players don’t 3bet the same ranges from every position. Tight Terry, at 6% total, probably 3bets more frequently from the BTN and one or both of the blinds as resteal 3bets. So be on the lookout for that before you raise preflop if he’s still in the pot.

Given that Tight Terry calls with broadway hands, but is capable of 3betting frequently, we can remove JJ+ (maybe TT) from his calling range. We can also remove AK, AQs and probably AQo as well because he’s likely 3betting those.

Folding at 57% means he defends at 43%, which makes sense given such a small PFR %.  He doesn’t raise that often, so when he does, he doesn’t give up too easily. I prefer to see Fold to 3bet at 60% or greater for more successful 3bet bluffs.

Cbet flop tells you exactly what to expect from the player on the flop before you call their preflop raise. At 83%, you can expect Tight Terry to cbet the flop, so he bluffs a lot of flops.

Wow! Tight Terry is a mega “turn honest” player. His cbet drops from 83% on the flop to 22%, which means he only double-barrels with the best hands, probably TP+.

These two taken together are an awesome combo that helps you exploit most cbettors. Because Tight Terry is so “turn honest”, you must call every flop cbet he makes when you suspect weakness. As soon as he checks the turn, you fire a bet to take the pot away. He’s making it super easy to bluff him when he’s the preflop raiser.

If I hover my cursor over the 100%, I can see it’s 3/3 instances. Tight Terry is extremely “flop honest” versus cbets so I must cbet 100% against this player.

Since Tight Terry has folded to flop cbets 100% so far, I haven’t seen him face any turn cbets yet. But, that doesn’t mean I can’t have a plan for cbetting the turn against him. Because he makes his decision on the flop, he’ll only get to the turn with a made hand like TP+. So, I probably shouldn’t double-barrel bluff him. If he calls my flop cbet, the best play is to check the turn in hopes the river can improve my hand.

This is a great addition to any HUD. But, you’ll have to force yourself to add player notes and look at them occasionally as you play. But, it does have a useful auto-generated notes feature that lists the hands you’ve seen at showdown and how they played them. 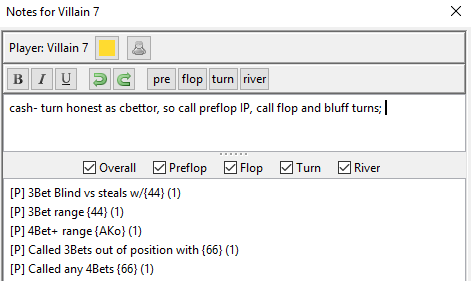 The more hands you have on a player, the more reliable the stats are.  At just 20 hands you should be able to classify most opponent’s player type. Anything over 100 is good and you can start using post-flop stats here. And 500+ should give you great reads on almost every stat except river stats.

Here’s my challenge to you: Create your own KISS HUD today and use it in tonight’s session. Seriously, I’m teaching you how to fish! Watch the video above and just follow along and within 5 minutes, your new KISS HUD will be ready for use. It’s quick, easy and useful.

Ashley Procter, Greg Samons, Patrick Henrichs and Sean Acey picked up PokerTracker 4 (get it here to support the show), the best poker tracking software.  I love it and use it everyday!  In appreciation, I sent each of them a copy of my Smart HUD for PT4.  With an ever-growing database of hands to study and all the helpful features, PT4 is the go-to software for serious poker players.

Matt Bodie, Adam Linkenauger, Daniel Saether and John McGrane bought the Smart HUD with a 1.5 hour webinar for PokerTracker 4.  It’s the best online poker HUD in the business with every critical stat in the HUD and the 7 custom popups. This is what every online player needs to maximally exploit opponents.

Glenn Vassett, Lee Moore and James Thomas purchased the Finding and Plugging Leaks with PT4 Webinar. They understand the importance of diving into PT4, examining your leaks and working to plug them in order to play more profitable poker.