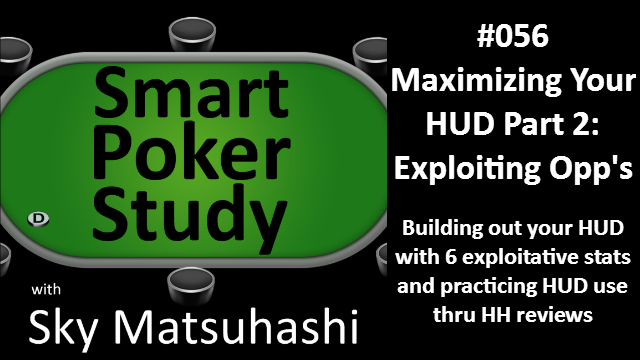 This is the second episode in my Maximizing Your HUD series: Exploiting Opponents. In this episode, I’ll help you build out your HUD with some key stats for exploiting opponents both pre and post-flop.

You’ll learn more about Raise First In, Raise/Fold to 3bet, Cbet and Fold to Cbet stats over multiple streets.  I’ll also teach you how you can practice using your HUD to aid in decisions through stat-dedicated hand history reviews.

RFI stat is slightly different than PFR in that it only counts hands and opportunities where the action was folded around to him and he decided to open the pot with a raise.  The bigger the RFI %, the wider and weaker his opening range.  You’ll use the RFI % to determine your likely equity and play accordingly by either calling to see the flop, or 3betting for value, 3bet bluffing or just outright folding pre-flop.

This is a great stat to have, especially when you’re up against an active open-raiser and if you like to use aggression and make 3bets to blow people off their hands.  Know what you’re trying to accomplish with your 3bet before you make it.  You’re committing extra chips to the pot (sometimes 9bb’s+) so make sure you also have a plan for the flop should he continue.  If you’re on a stone bluff, you’d like to see a high Fold to 3bet, but if you’re going for value then you want to see a very low Fold to 3bet as you don’t want him to get away from hands that you dominate.

Remember that the higher their fold to 3bet % is, the more worrisome it is when they decide to call or 4bet over your 3bet.  If you expect a fold most of the time, but they do something different, then having that plan for the flop before you made the 3bet will really help you to save money in the hand (or make additional money when you flop strong).

Combo Stat for Exploiting Opponents: RFI and Fold to 3bet

These two stats are great to have next to each other.  Here are some combos to look for:

High RFI, High Fold to 3bet: (example 30% and 85%) These guys open wide and ditch to aggression.  They’re one pump stealers, so punish them by 3bet bluffing until they wise up and adjust their ranges or start calling you.

Low RFI, Low Fold to 3bet: (ex 10%, 40%) These guys open a narrow and strong range, so they don’t give up that easily vs 3bets.  Generally 3bet these guys for value or with an Ace blocker.

High RFI, Low Fold to 3bet: (ex 30%, 55%) These guys are aggressive and love to see flops as they’ll call your 3bets with very wide and weak ranges.  You can open up your value 3bet range vs these guys especially when IP as you can use your position post-flop to help you take down bloated 3bet pots.

Low RFI, High Fold to 3bet: (ex 10%, 70%) These guys raise strong ranges, but they see doom whenever someone 3bets them and they think they’re up against AA or KK, so they ditch way too strong of hands like TT & JJ.  If you find a guy like this, 3bet him liberally but beware b/c they’re more likely to defend w/4bets if you start doing this too much.

This is the best flop stat that I use to gauge my opponent’s tendencies.  Given that a given hand only hits the flop about 33% of the time (solid draw or pair +), the % here indicates what types of hands he bets with as the pre-flop raiser.  If over a good sample he’s cbetting 30-40%, then I know he only cbets when he hits and checks when he misses.  If he’s up around 75% or more, then they like to mix it up and bluff a bit, counting on the initiative by being the pre-flop raiser to take the pot down.  The hardest % to dissect is right around 50-70% over a good sample.  This is probably a decent player who mixes it up, and possibly uses a HUD himself to gauge when and if he should Cbet.

Before you decide to play a hand pre-flop, you must look at this stat before you click ‘Call’ or ‘Raise.’  Knowing his tendencies on the flop will help you decide whether or not to play your hand.  If he’s got a high Cbet then you can take it away on the flop with a c/r steal or a raise IP.  If he’s got a low Cbet stat then you can c/f or c/r for value, and if you’re IP then a Flop Float (bet after a missed Cbet) could be in order.  As with any bet you make, know what you’re going for before you make it.  The same basic parameters of the Cbet Flop stat can be applied to the turn.

These two taken together are a powerhouse combo that tells you how willing your opponent is to fire multiple bullets and tells you which street they become honest on.  If they’re both low and he fires both streets, then you’d better have a very compelling reason to stick around to the river as he’s probably got TPTK+.  If he’s high in both, then on the flop you need to make a decision before you call as to what you’ll do on the turn b/c he’ll likely barrel it.  Always have a plan for the next street which includes more ways to win the pot than to just make your hand.

Besides Flop Cbet, Fold to Flop Cbet is a super important flop stat on your HUD.  Hands hit the flop only 33% of the time, so if he’s got a Fold to Flop Cbet of 70%+, then you’ve got a flop honest player and you need to cbet with all of your air.  Should he call, you can easily give up knowing he’s got a piece of it.  If his stat is lower, like 35% fold to cbet, then you need to cbet all of your value hands and give careful thought to the board texture before you decide to cbet bluff.  When opponents have a middle of the range % like 40-60% over a good sample, they’re pretty hard to dissect.  They like to continue with all strong hands of course, but also with draws and over cards and just plain air (they might also look at your stats, and if you’re a one-and-done player they’ll call with a plan to take it away on the turn).

The Fold to Turn Cbet stat works the same as the Fold to Flop Cbet, but takes on the most relevance when looked at in combination with it.  This does help us when deciding to take advantage of light flop cbet callers and getting more value from those “unbelieving” opponents who call multiple streets with mediocre hands.

How do we go about learning how to use these stats for exploiting opponents?  In part one of this series (HUD Essentials), I discussed the three ways in which we do this: learn what the stats tell you, learn the layout and play with intent.

There’s one practice that helps with all three of these things, and that is using the HUD during every hand history review session.

Hand history reviews provide the time to pause the action for as long as you need, sift through your notes, dig into the HUD and popups, find the information you need, and determine if your decision can be backed up with good intel gathered from your stats.

Practice like this off-the-felt will ingrain in your mind all the stats, their uses, how they work together and their placement in your HUD and popups.  This will make for more on-the-felt comfort when using your HUD, and will lead to better exploitation of your opp’s tendencies and more profits for you.

4th Part: Percentage Form and Color Coding for the Win

Here are some screenshots: