Maximizing Your HUD Part 4: Percentage Form and Color Coding for the Win | Podcast #60

This is the fourth episode in my Maximizing Your HUD series: Percentage Form and Color Coding for the Win. In this episode, I teach you about percentage form and how to color code your HUD stats. This helps for quick and easy reference and to find frequency exploits in a player’s game.

Listen to episode #60: Percentage Form and Color Coding for the Win

So far in this series I’ve discussed HUD usage for online poker.  I gave you the essential elements that every HUD needs, as well as additional stats that you can use to exploit your opponents.  I also talked about the popups and why they’re so useful, and I gave you some ways you can practice using your HUD.

But we haven’t really discussed how to understand and think about the numbers in your HUD.  What does it mean when “Robbing Robbie” raises from the BTN 75% of the time, what’s it mean when “Fit-or-Fold-Francis” cbets only 20%, and how strong is “Debbie-Double-barrels” range of hands when she’s cbetting the flop and turn 70% of the time?

The first step to understanding the stats we see on the HUD is understanding Percentage Form.  This is a shorthand way to describe a range of hands.  Instead of saying, “He 3bets Jacks or better and AK” you can just say, “He 3bets 3%” and someone versed in percentage form will understand that.

Get Flopzilla Pro to help you learn ranges in percentage form.

Enter in a range of hands and it’ll tell you the % of hands that comprises.  There’s a huge difference between a 10% range and a 50% range of hands, and understanding this is very useful for hand reading.

HUD’s give us the % of how often somebody does something, which helps us be more technical players rather than feel players.  Knowing how often they perform certain actions, which tells us the likely range of hands they’re doing it with, helps us to make plans and develop plays to combat them.

PFR is the % of the time that a player put in any raise pre-flop.  This stat tells us how aggressive a player is.

That’s percentage form in action: looking at a stat and being able to understand what range of hands it correlates to.

This stat tells us how often the player decided to 3bet pre-flop.  It’s another stat that looks at a players aggression and the % we see here is very telling.

You’ll often encounter people who only 3bet 2-3% of the time, which is JJ+ and AK.  That’s it, just value hands.

Stat percentages tell you how often a player does something, but doesn’t always correlate to a range of hands.  Cbet, or continuation bet, tells us how often the player bets at the flop given that he made the last raise pre-flop.

We know that most ranges only “hit” the flop about 33% of the time.  By hitting the flop I mean flopping TP+ or an OESD+.  We know this by using a program like Flopzilla Pro that shows us how often a range of hands will hit flops.  Here’s a screenshot of Flopzilla showing how a 25% raising range hits an average flop 34.2% of the time: 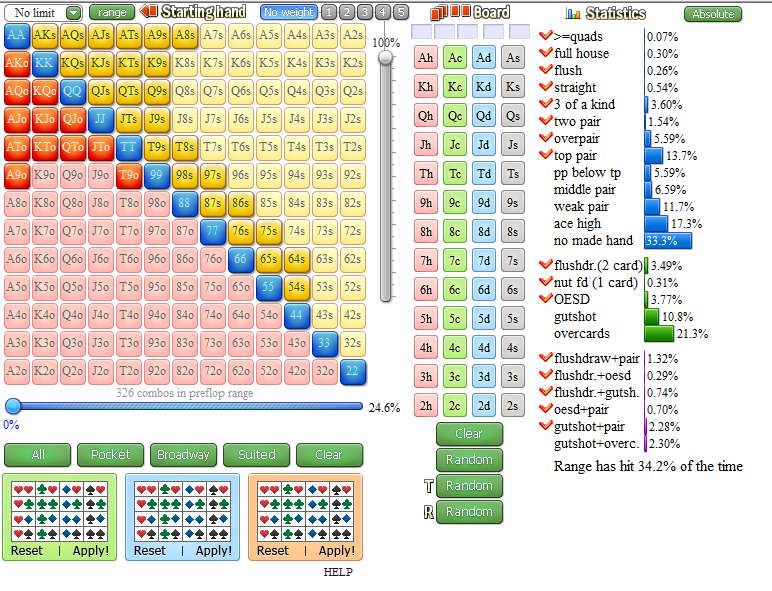 If an opponent has a cbet higher than 33%, you know he bets when he doesn’t hit the flop well, and the higher the % the more often he’s bluffing.  If the cbet is below 33%, then you know he’s fit-or-fold and only fires when he hits the flop really well.

PokerTracker 4 expertise will help you get more from HUD Statistics: 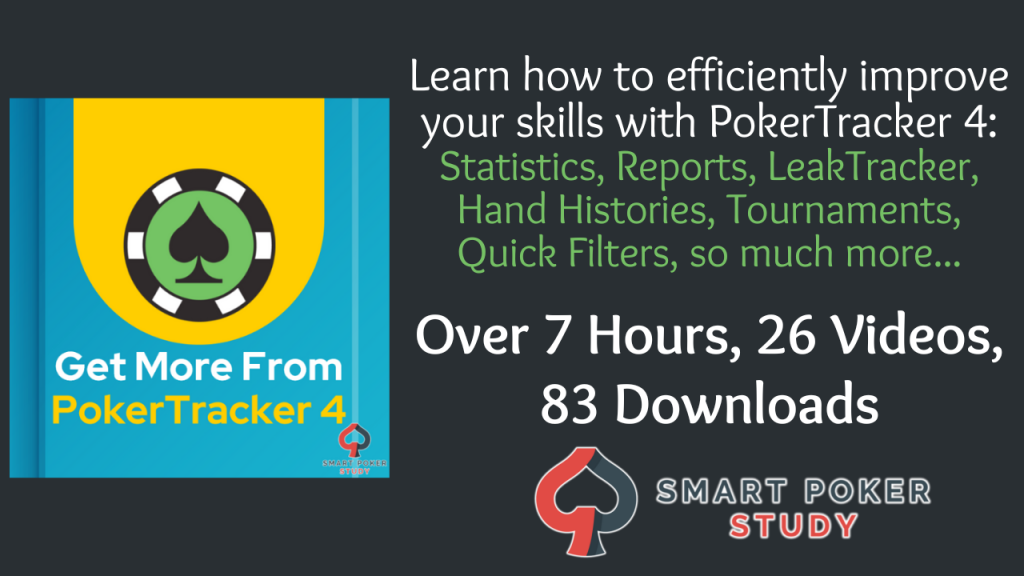 For PFR, I use a red/yellow/green/orange color scheme for my stat ranges.  Red designates nitty stats, yellow is for reg stats, green for fishy and orange is for beyond fishy like LAG’s and donks.

So my own color coding ranges for PFR are:

Another way that color-coding helps to spot frequency issues is when two different stats have opposite colors.  For example, if their flop cbet is green (which is high and fishy or aggressive) and their turn cbet is low and red (which is nitty), then you know the opponent is turn honest and only bets here with the goods.  This is like an opponent with a cbet of 70% on the flop then only 30% on the turn.  Target these guys and take it away from them when they check the turn.

There isn’t a right or wrong way to color code your ranges, and even the ranges you select aren’t right or wrong.  It’s just your opinion and whatever helps you exploit your opponents.

Ultimately, what I recommend you doing is writing down each stat in your HUD, and on a scale of 1-100, give thought into the ranges that comprise a nit’s, a reg’s, a fish’s and a LAG’s ranges.

My color coding ranges for:

Another part of color coding to make stats more user-friendly and quick to identify is background colors and font sizes.  I increase the font sizing of the most important stats in my HUD, namely stack size in BB’s, VPIP and PFR.

The other thing I do is color code the backgrounds of stats that work well together.  If you look at the screen shot of the 6max SNG & MTT SMART HUD below, you’ll see the following:

Ultimately, it’s up to you to make your HUD as user-friendly as possible, and the goal should always be to make it so your HUD helps you exploit your opponents.  That’s why you’re using the HUD after all.

Here’s my challenge to you for this episode: Create some of your own color coding ranges for the most important stats in your HUD. I recommend doing this for the stats mentioned today, as well as Attempt to Steal, Fold to Cbet, # of Hands Played and VPIP. Take the time to create these on your own, giving careful thought to what the percentages mean. Use Flopzilla Pro to aid you in this process. This practice of thinking about each individual stat and what the possible percentages mean will be great for your ongoing poker development.