This is part 3 of a multi-part series about how I’ve updated my new poker HUD and all the different stats I’ve placed on it.  If you haven’t read the previous posts yet, here’s Part 1 and Part 2.

Let’s continue with the Player HUD that I use.  I’ve already covered lines 1 and two in Part 2, so I’ll continue with Line 5 in this post and save line 6 for the next one. 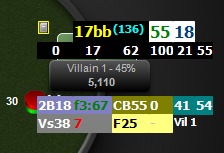 Total RFI (Raise First In, denoted by ‘2b’ above, 18%) – This is a little different than PFR in that it only counts hands and opportunities where the action was folded around to him.  This number is good for seeing how aggressive he is overall.  18% corresponds to roughly 33+, A2s+, A6o+, KJs+ and KQo.  The more aggressive he is, the more likely you can 3bet steal.  Of course, it’s good to know this stat by position as well, and I’ve got that in my pop-up which I’ll cover in a later post.

Knowing his opening range allows you to have a better grasp of your hand strength vs his likely holdings.  This is key in deciding whether or not to play in this situation.  Against this range a hand like ATs or 66 has about 50% equity, while AK has 61% and QQ has 68%.  Determine your likely equity and play accordingly.

Fold to 3bet – This is a great stat to have, especially if you’re a bit aggressive and like to 3bet bluff.  Be aware of the game you’re in as there’s a lot more aggression in short-handed games, and you’re slightly less likely to get away with your bluffs at 6-max tables.  Know what you’re trying to accomplish with your 3bet before you make it.  If you’re on a stone bluff, you’d like to see a high Fold to 3bet, but if you’re going for value then you want to see a very low Fold to 3bet as you don’t want him to get away from hands that you dominate.

I chose the same color for the background for these two to aid me in my decisions when facing an open.  The relation between these two numbers is pretty telling, just like the VPIP/PFR gap.  If you’re up against a high RFI and high Fold to 3bet, then you’ve got an aggressive opponent who is capable of ditching hands before it gets too costly.  Opposite stats (low and low) indicate that he only opens with premium hands and won’t give up that tight range easily.

You can encounter players with disparate numbers, like a 30% RFI with a 10% fold to 3bet.  This means he continues with 90% of his opening range, so you can 3bet him pretty widely and he’ll continue with hands you dominate.  Less frequently you’ll encounter a low RFI and a high Fold to 3bet.  These are guys who just can’t take the aggression and want to play small ball pre-flop.  Punish them.

Cbet Flop – This is the best flop stat that I use to gauge my opponent’s tendencies.  Given that you only hit the flop about 33% of the time (solid draw or pair +), the % here indicates what types of hands he bets with as the pre-flop raiser.  If over a good sample he’s cbetting 30-40%, then I know he only cbets when he hits and checks when he misses.  If he’s up around 75% or more, then the guy likes to mix it up and bluff a bit, counting on the initiative he has by being the pre-flop opener to take the pot down.  The hardest % to dissect is right around 50% over a good sample.  This is probably a decent player who mixes it up, and possibly uses a HUD himself to gauge when and if he should Cbet.

Before you decide to play a hand pre-flop, you must look at this stat before you click ‘Call.’  Knowing his tendencies on the flop will help you decide whether or not to play your hand.  If he’s got a high Cbet then you can take it away on the flop with a c/r steal or a raise IP.  If he’s got a low Cbet stat then you can c/f or c/r for value, and if you’re IP then a Flop Float (bet after a missed Cbet) could be in order.  As with any bet you make, know what you’re going for before you make it

Cbet Turn – The same basic parameters of the Cbet Flop stat can be applied here on the turn.  You’re looking for players who give up on the turn, essentially they’re ‘one and done’ players.  Conversely, if you find a person with both Flop and Turn Cbet stats being high, he likes to barrel his opponents.

These two (same teal colored background above) taken together are a powerhouse combo that tells you how willing your opponent is to fire multiple bullets.  If they’re both low and he fires both streets, then you’d better have a very compelling reason to stick around to the river as he’s probably got TPTK+.  If he’s high in both, then on the flop you need to make a decision before you call as to what you’ll do on the turn.  If you call the flop with intent to fold the turn to a Cbet unless you hit gin, then you’ve just made a huge tactical error.  Always have a plan for the next street which includes more ways to win the pot than to just make your hand.  Ideally, pre-flop you noticed this and your intent is to bluff on the turn with a raise, or if you flop strong to just let him value own himself.  You can also have a plan to take it away with a river donk lead on a scary draw filling card or one that pairs second pair.

WTSD (Went to Showdown) – This isn’t the most necessary of stats, but I had room and wanted to throw this in as it can be valuable should you reach the turn with an opponent.  If they’ve got a very high % like 40%+ then you’re up against someone who rarely folds a pair.  If below 20% he normally gets there with good hands worthy of betting rather than check/calling.  If you find yourself on the turn with either of these players, how would you plan to handle the river?  In general you’d value bet wider the high WTSD and call with 2p+ vs the low WTSD %.  The more frequently they get to showdown, the weaker hand they’re likely to have.  For the most part you’re looking to value bet players with 40% or higher and bluff the less than 20% players.

When looking at WTSD, the player’s VPIP should also be taken into account.  A player with a WTSD of 20% and a VPIP of 15 is very much removed from another with the same WTSD but a VPIP of 45.  The looser player is more likely to get to the river with vastly weaker hands, and the tighter player starts with a stronger range so is more likely to have a stronger hand.

W$SD (Won $ at Showdown) – This stat says how often the opponent wins the pot at showdown.  No showdown and the hand won’t be counted.  Suffice it to say that the lower this % is, the more likely he shows up with marginal hands; and the higher it is the more often he shows up with the goods.  In general, above 60% would be a nitty player who gets there with strong hands, and below 40% gets there too weakly and can call bets too freely.

These two stats are inversely related.  If an opponent has a higher WTSD then he’s more likely going to have a lower W$SD (more hands = less strength), and vice versa.  A high WTSD and lower W$SD in general is a calling station and should give you tons of value.  An opposite player, low WTSD and high W$SD shows up with strong hands, so if he bombs the river then you’ve got to fold all but your best hands.

Holy cow, once again I’m at about 1,500 words so it’s time to cut this off and continue it in the next post where I’ll go over the final line of my Player HUD.

Please let me know if my HUD is missing any valuable info that you just can’t do without in the comments below.