This is part 5 in a multi-part series about my newly developed poker HUD.  It’s adapted from Assassinato’s and Apestyles’ HUD’s that they’ve recently discussed in some Cardrunners.com videos.

In this post I’ll discuss my Assassinato Pop-up.  It’s taken directly from Assassinato’s pop-up with a few stat changes and aesthetic changes to suit my own game.  I’ll cover this pop-up with an emphasis on dissecting a particular opponent’s stats.

*Also, it’s key to note that I use PokerTracker 4 as my software choice, so some of these stats might work differently or even calculate differently in other software. 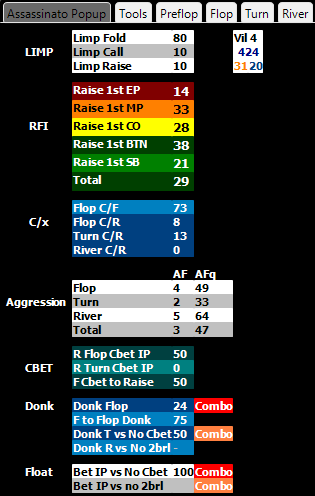 This pop-up is my main pop-up that covers every street and lots of different stats to help me exploit opponents in different situations.  These are all very useful stats, but there’s only so much room on my main Player HUD, so it’s in this readily accessible pop-up.

Knowing how often players are limping and how they react to raises is key in taking advantage of their weaknesses.  When this particular player limps he folds 80% of the time to a raise, so stealing his limps is a no brainer.  I know that if he should limp/raise I’ve got to be careful as it’s probably strength.  Also, if I’ve got a great hand like AA or KK I just might want to minraise to try to keep him in the pot.  Too big of a raise will get him to quickly fold.

I also put the player’s total hands (424) here to give me a good idea of how reliable his stats are.  And the VPIP/PFR are here as well so I can see how aggressive/passive he is overall.

RFI (Raise First In) by Position

These are key to stats to know for any opponent.  He’s a pretty active player with an overall RFI of 29%.  He seems to be positionally aware as his lowest RFI is in EP and highest is on the BTN.  Being a 31/20 player, he’ll probably fight for pots post-flop.  If I’ve got a choice between isolating him or some weak 40/12 fish on the table, I’m going for the fish.

It would appear that the best place to resteal vs him would be when he opens the BTN.

These stats help to dissect flop aggression.  Knowing Cbet and Fold to Cbet stats is great (these are on my Player HUD) but if I face a C/R I’d like to know how likely he’s doing so as a bluff.  His C/F stat indicates he’s pretty flop honest, so a check most likely means weakness.  With a C/R of only 8% on the flop, I’ve got to watch out if I face this and continue only with strong hands.  His increased turn C/R % makes sense because when he makes it to the turn, being a flop honest player, he’s likely to have a strong hand and waits for the turn to build the pot.

I’m still trying to gain some familiarity with this section as I’ve only recently started using these stats.

Aggression Factor (AF) is a measure of how aggressive or passive the player is (total and each street).  It’s calculated as:

Most players fall between 2-3, with anything above being pretty aggressive and below being very passive.  This particular player loves to be aggressive on the river, but on the turn he is less so.  Maybe, as discussed earlier, if he makes it to the turn he’s got a strong hand so he feigns weakness (tries the c/r but the opponent checks behind) here to get more value on the river.  While this isn’t the best indication of how aggressive the opponent truly is (it doesn’t take into account all possible actions), it can help to see tendencies on particular streets.  AFq might be a better indicator of how an opponent plays each street and the likely strength of his hand.

Aggression Frequency (AFq) is a measure of how frequently a player is aggressive (total and each street).  It’s calculated as:

This formula takes into account all possible actions (bet/call/fold/raise are all in the divisor).  In general, 60% + is pretty aggressive and 30% or less is passive.  This guy’s river AFq is pretty aggressive, but that doesn’t necessarily mean he bluffs a lot.  Some players only get to the river with the goods (remember how he’s pretty flop honest at least when OOP).  If he plays the same IP, and makes it to the river, you’ve got to assume that he’s got a good hand and wants to make money so will bet or raise more often than not.

So, you want to look for players who get to the river often with a high AFq.  You can bluff re-raise, bet big or easily call with your bluff catchers as he’s more likely just betting to get you to fold.

Here’s the Assassinato HUD again so you don’t have to keep scrolling up so far:

Cbet is on my HUD, but these different stats give me more detail to see how likely I’ll face a raise after a cbet or if he’ll fold to a raise after cbetting himself.  Seeing if someone is a habitual raiser on the flop will prepare me for what to expect and can also give me an additional strategy to employ.  He raises flop cbets 50% of the time, but this is probably 2 out of 4 or some other small number (given the exact even number of 50 and the relatively low 424 hands vs him).   But, pairing this with his flop honesty that we discussed earlier, should I face a raise after a cbet, then he’s likely strong.  He does have a high AF of 4 on the flop, but a middling AFq, which means half the time he’s flop aggressive and the other half not.  I think I would only proceed with TP+ or with a very solid pair+draw.

I treat these stats just like Cbet stats, but they’re just made by somebody without initiative on the flop.  A donk of 70% + is high (as you don’t have a hand good enough to build the pot 70% of the time) and a lower number like 30% is more likely a value bet.  If this guy, at 24%, donks the flop then I should really consider folding all of my air.  Here’s another instance of flop honesty as he folds to donk bets 75% of the time, which makes sense as you only hit a strong hand on the flop about 35% of the time.  The double-barrel stats help to determine how I should approach the turn and any turn aggression I face.

I pair these two together b/c they are an indication on the flop how likely he is to take control of the hand when he’s the pre-flop caller.  If he donks, at 24%, it’s for value.  But when the pfr checks he tries to steal it with aggression (assuming the 100% is more than just 1 for 1).  So, if I’ve got a strong hand I can raise his donk or c/r his bet after my missed cbet.

I pair these together b/c on the turn they’re an indication of how likely he is to take control of the hand.  If he’s OOP and I check behind the flop, then he’s 50% likely to bet to steal as I showed weakness (or he could’ve been intending to c/r the flop).  If he calls the flop then bets on my missed cbet, he could be doing this as a bluff or for value (due to the nil stat I’m not sure what he’s capable of).  I suspect over a good sample size these numbers would be rather low due to his low turn AF and AFq.  On some opponents these can tell you how much they try to steal on the turn (70%+ is high while 30% is value).

Float bets are bets when the pfr chooses not to cbet and the player is IP.  They’re good indicators of how aggressive the opponent is as they work just like cbets (70%+ is bluffy and 30% is for value).  You can use these to get extra value by c/c when they’re high then bet or raise the next street, or you can c/r as a bluff.  These stats require more hands to be really effective, though, so I’d be looking at these more often vs opponents with 1,000+ hands.

My next post will go over another one of my HUD pop-ups, my Cbet Pop-up.

Am I leaving any off that you would put on your main popup?  Please leave your thoughts in the comments below.