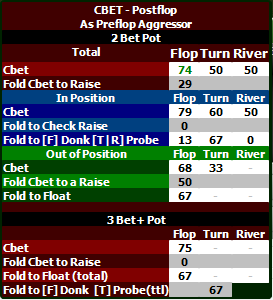 This is part 6 in a series about my newly developed poker HUD.  It’s adapted from Assassinato’s and Apestyles’ HUD’s that they’ve recently discussed in some Cardrunners.com videos.

In this post I’ll discuss my Cbet Pop-up.  It’s taken directly from Apestyles’ pop-up with a few stat changes and aesthetic changes to suit my own game.  I’ll cover this pop-up with an emphasis on dissecting a particular opponent’s stats.

*Also, it’s key to note that I use PokerTracker 4 as my software choice, so some of these stats might work differently or even calculate differently in other software.  If you’re interested in getting PokerTracker 4 for yourself, please click on my affiliate link in the sidebar for a free trial or visit the Resources page for more info.

This pop-up is attached to my opponent’s Cbet stat on my Player Stats HUD.  It gives me a more detailed look at my opponent’s post-flop play when he’s the aggressor and has the initiative on the flop.  It’s broken down into two different sections: 2 Bet Pots and 3 Bet + Pots.  The 2 Bet section is broken down into three segments: Total stats, In Position (IP) stats and Out of Position (OOP) stats.

You can see that they’re all broken out by street as well.  This is great to see how many barrels an opponent is willing to fire or where they’re more likely to fold a hand.

Seeing this street by street let’s me know a couple of things: how flop honest he is and how likely he is to barrel.  On this particular opponent I have about 1,100 hands so this stat is very reliable.  At 74% he Cbets super wide and barrels 50% of the time, so if I call I should expect a turn Cbet (I shouldn’t call here and plan to fold the turn).

He is plenty capable of triple barreling as well, so I’ve got to be aware of that and only call the flop if I’ve got enough equity to call for 3 streets (or raise sooner as a bluff).  I think I can probably call three streets w/TPTK as long as the board isn’t too scary.

He doesn’t like folding his Cbets to raises, so I should do so with the top of my range to get value from him.  I can probably make bigger raises for value especially if OOP as he seems to value position (more on this in the next segment).

Breaking this down between IP and OOP helps to play against him in each situation.  When looking at the differences here, he obviously likes playing IP and is more willing to barrel each street.  These IP stats just about mirror his Total stats, so if I intend to call the flop it would be a huge tactical error to fold the turn as I should expect a bet.

He doesn’t like to do this IP.  Check/Raises don’t often happen, but even if this is 0 out of 4 chances, it’s good enough to know he’s likely to call most C/R when IP, so I can’t expect to get away with an easy one street bluff.  I should do so with a great value hand or some really good pair+draw hands that I can continue betting the turn on cards that give me equity.

I can probably donk semi-bluff this guy with the intention of firing the turn if I’ve got a hand that can improve on the next card.  Let’s say I’ve got a 97dd and the flop comes 56J with one diamond.  I’ve got a gut shot + back door flush draw.  I can barrel the turn on any diamond, 7, 8 or 9, and even on a Jack.  There are lots of cards that can scare him, especially as he can be calling with just about anything and doesn’t necessarily have to have a value hand or a bluff catcher to call.

When OOP he’s a bit more cautious, so this would be the time to take advantage of him and play on his OOP tentativeness.  Should he Cbet I can call here with intent on folding the turn as he’s only barreling with a value hand (or maybe if the turn hurts my range).  If he checks I’m most likely going to Float and try to take it away with a bet.

Fold Cbet to a Raise

With a slightly more narrow cbetting range when OOP, he’s calling 50% of the time.  If I’ve got a value hand, I need to C/R smaller to get him to call, or if I’m bluffing it’s got to be bigger to elicit the fold.  Not enough hands to see what he does on the turn and river, but I can look at other pop-ups I’ve got to see his turn and river aggression tendencies (AF and AFq).

If he checks the flop then I’m definitely betting.  He’s pretty flop honest when OOP facing a donk bet, so now’s the best time to take it away with a bluff.  If I’m going for value, then making a smaller bet or just checking behind would be good plays.

He’s a fighter in 3bet pots when he puts money in on the flop as evidenced by his high Cbet % and his low Fold Cbet to a Raise %.  But, he folds often when he checks, and making turn probes against him could be profitable.  Although, with his Fold to Float stat at 67% this is only 2 out of 3 chances (maybe 4 out of 6), but it’s still evidence that he leans towards flop and turn honesty when facing aggression.

My next post will go over another one of my HUD pop-ups, my Fold to Cbet Pop-up.  The stats there work very much like this pop-up, but are geared towards me being the pre-flop aggressor.

Am I missing stats on my poker HUD that you use when thinking about post-flop play vs an aggressor?  Please tell me where I’m going wrong 😉 in the comments below.

Please help your followers learn a little and bring in some new readers to my site: Tweet #pokerHUD


Make your next session the best one yet!