This is part 7 in a series about my newly developed poker HUD.  It’s adapted from Assassinato’s and Apestyles’ HUD’s that they’ve recently discussed in some Cardrunners.com videos.

In this post I’ll discuss my Fold to Cbet Pop-up.  It’s taken directly from Apestyles’ pop-up with a few stat changes and aesthetic changes to suit my own game.  I’ll cover this pop-up with an emphasis on dissecting a particular opponent’s stats.

*Also, it’s key to note that I use PokerTracker 4 as my software choice, so some of these stats might work differently or even calculate differently in other software.  If you’re interested in getting PokerTracker 4 for yourself, please click on my affiliate link in the sidebar, or check out the Resources page for more info. 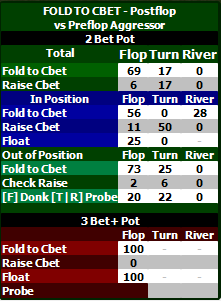 You can see that they’re all broken out by street as well.  This is great to see how sticky an opponent is to his hand, and how many barrels I’ll need to fire to get him to fold.  It also helps to gauge how much value I can get from great hands.

Seeing this street by street let’s me know a couple of things: how flop honest he is and how many streets I’ll have to barrel to get him off of mediocre hands.  On this particular opponent I have about 1,100 hands so this stat is very reliable.  At 69% he folds to Cbets quite often and probably only continues when he hits the flop or has a good draw.  Because of his flop honesty, his Fold to Turn Cbet is necessarily low at 17%.  So, if he sticks around past the flop he’s likely to have a strong hand and will see it to showdown.  I should only barrel the turn with good hands looking for value, as bluffs are unlikely to succeed.

Both his flop and turn Raise Cbet stats are very low, so if he raises I need to continue only with the top of my range like top 2 pair+.  Even with top 2 pair, I’d probably be better off pot controlling w/out the nuts for the rest of the hand.  Overall, this guy is very flop honest, so I should look to play lots of pots against him, especially IP.

His higher Turn Raise Cbet is probably indicative of a player who likes to commit and build the pot once he sees the turn.  If we had his Turn AF or AFq here it would probably tell us this is his most aggressive street.

Breaking this down between IP and OOP helps to play against him in each situation.  When looking at the differences here, he obviously likes playing IP and is more willing to call flop Cbets.  When he’s IP he’s a little less flop honest, so I need to proceed with some caution, but I should Cbet most flops that probably hurt his pre-flop flatting range (Ace highs, baby flops, very dry spread out boards like Q72r).

Seeing a Turn Fold to Cbet of zero is very telling, and I should only double-barrel w/the nuts or close to it.

This IP stat is just a little above his total Raise Cbet, so just like above, should I face a raise I need to proceed with only the top of my range.  Cbet raises are very telling for this opponent.  With a higher Raise Cbet on the turn, he likes to just call flops and build the pot on the turn.  If I’ve got a great value hand and we get to the turn, I need to bet in hopes he likes his hand and raises.

This is a great stat that tells you how often he fires at a pot when the pre-flop raiser doesn’t Cbet.  Often we think of a float as just calling a bet IP, but PT4 uses this term a little differently.  With his Float at 25%, his bet after my missed Cbet is most likely pair+, and possibly good draws like a nfd or oesd.  I can continue on the turn with good hands and draws, and checking to entice a value bet is probably the best way for me to get value if I’ve got a super strong hand on the turn.

If an opponent has a low fold to Cbet % but a high Flop Float % (this guy’s opposite) then c/r instead of cbetting would be a good idea if you’ve got a hand only worth bluffing.  Your cbet is likely to be called, so just don’t do it unless you’re willing to fire the turn and he’s likely to fold with a high Turn Fold to Cbet.

This is a good combo to see how likely opponents are to call a Cbet with intention to steal on the turn.  If the opponent has a low Fold to Cbet and a high Turn Float % then he’s a good one to c/r the turn to resteal or c/c to get extra value from him on the river as he’s likely to fold to your turn c/r.

When OOP he’s quite cautious, so I should bluff Cbet every time he checks to me as he’s folding 73% of the time.  If I’m going for value, the best may be to check behind and let him try to catch-up on the turn.

A c/r would be very scary and I can only continue with a nut hand or very near it.  Same goes with the turn: c/r from this guy = the nuts!

Flop Donk % is pretty telling of flop honesty just like the Flop Cbet stat.  At 20% this guy only donks w/TP+.  If this were at 50%+, then he donks w/pairs and draws.  At 65%+ then he’s got some likely overcards on baby flops that he’s betting.

Turn and River probe %’s work just about the same.  These stats are calculated by an OOP turn/river bet when the pre-flop aggressor checks the street before.  These low %’s probably signify he wanted to c/r the flop for value, or was maybe just waiting for the turn to make his move to build the pot.

Looking at these in conjunction tells you how honest his donk bets are.  If he’s got a high Fold to Cbet, then a low donk % is an “honest donk” with good hands, whereas if the donk % is high, he’s probably honest vs Cbets but likes to donk bluff occasionally.   You can also just ignore the Donk Flop stat, and when they donk into you on the flop, check their Fold to Cbet stat before making a decision (low or high tells you how flop honest he is).  Conversely, a low Fold to Cbet and high Donk Flop means he bluffs a lot, so to call or raise is now your decision.

Having these 3bet+ pot stats helps to see how his play may differ when he’s fighting for bigger pots.  In general, regs and LAG players will fight harder for 3bet pots.  With this particular opponent, it’s a bit hard to judge as his 100% and 0% could just be out of a couple instances.

If these stats were in line with his 2bet stats, then we could treat him the same in either scenario.  But sometimes you’ll encounter players who fold to Cbets a lot less in 3bet pots or C/R or Raise Cbets a lot more.  These guys fight for the bigger pots, and if he’s a tight/nitty player this would make sense as he’s getting to the flop with a stronger range.  If he’s a LAG then he may be more likely to fight with or without a good hand.  Keep in mind his overall aggressiveness when deciding how to approach the post-flop streets in 3bet pots.

My next post will go over the final HUD pop-up I use; my 3bet Pop-up.  The stats here will help you determine how to react to a player’s pre-flop 3Bets.

Am I missing stats on my poker HUD that you use when thinking about post-flop play as the aggressor?  Please let me know what I’m missing in the comments below.

And please, if you liked this article and think it can benefit your poker playing followers, tweet it for me: Tweet