This is the final part in a series about my newly developed poker HUD for MTT's and SNG's.

In this post I’ll discuss my 3Bet Pop-up.  It’s taken directly from Apestyles' pop-up with a few stat changes and aesthetic changes to suit my own game.  I’ll cover this pop-up with an emphasis on dissecting a particular opponent’s stats.

*Also, it’s key to note that I use PokerTracker 4 as my poker tracking software of choice, so some of these stats might be named differently or even calculate differently in other software. 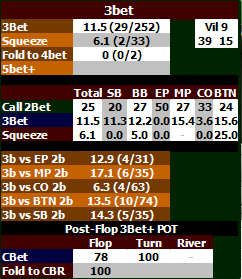 This pop-up is attached to my opponent’s 3bet stat on my HUD.  It gives me a more detailed look at my opponent’s 3bet tendencies.  It’s broken down into a few sections: Total Stats (3bet, squeeze, fold to 4bet and 5bet+), Positional Stats (call 2bet, 3bet, squeeze), 3bet vs positions and two post-flop 3bet+ pot stats that can help me determine what my possible options are post-flop to steal or get value from this 3bettor.

On this particular opponent I have 965 hands.  I also include the VPIP and PFR in the white area up top to remind me of his overall play.  This guy, at 39/16, is quite fishy and loose-passive (LP).  He likes to see lots of flops and raises a rather strong range.

Most value 3bettors fall around 8 to 10%, with anything below being rather nitty (TT+ and AQ+).  At about 10-14% you've got a tough player who likes to throw in hands just below his flatting range (if the worst he'd call your open with is KTs, then he might 3bet bluff K9s and K8s).  This is the sweet spot for most regs, which makes them pretty hard to read.  Unfortunately, this guy falls in this range, but looking at his 39/16 stats, it's probably just dumb luck on his part and not an attempt to stay balanced.  Anything over 14% is just a whole lot of bluffs.

The key to using the 3Bet stat efficiently is: Every time you get 3Bet look at this stat by position (next section below) to determine their likely hand strength.  But having said that, knowing their total 3betting tendencies can really help to play opponents.  This 11.5% total 3Bet is 29/252 instances, so it's a decent sample size.  You can put him on roughly any pocket pair (maybe not 22-33) A8s+, ATo+ and some good suited K's.  He does have some decent value hands here, but maybe some hands with negative implied odds (hands that when hit can win small or lose big, like AT and KT).

The Squeeze is a great play to use to steal pots or to get extra value from two calling stations.  Most of the time, squeezes work as a steal because the first to raise can often be relatively weak (rampant aggression in today's game means people open w/very wide ranges from any position).  The overcaller is weak b/c if he were strong, he would've likely raised it.  A 3Bet here puts lot of pressure on the opener b/c he doesn't close the action, and it puts pressure on the overcaller b/c he's most likely weak.  Some opponents use this as a steal spot, but the %'s fall in line with 3Bet %'s outlined above.  At 6.1% he's overall a value squeezer, so watch out if you're caught in this.  You can probably value 4bet pretty big w/AA or KK as he'll likely call or overshove.

He's only faced 4bets twice, but both times he didn't fold.  Even though it's a small sample, it's safe to assume that he's likely calling a 4bet.

This can be helpful when especially deep (100bb's+), but for the most part players are getting it in before a 5bet in MTT's and SNG's.  This can be a bit more helpful in cash games, but it's probably not until you've got 3K+ hands on a player that you even see one or two instances when he has the chance to 5bet. It does take some balls to make a bluff 3bet and a bluff 5bet, so if you get 5bet, I hope you've got AA against most players.

I include this stat so I can see the difference between his calling 2Bets and making 3Bets.  If you would add these two together, then he's playing vs a 2Bet 36.5% of the time, and folding 63.5%.  But, sometimes he may call with a hand like KQo and sometimes 3bet (depending on opponent).  Since some hands could fall into both plays, I would say he plays about 30% of hands to a 2Bet and folds 70% of the time.  If he plays 30% of the time, and only raises about 1/3 of those hands, his 2bet calling range is pretty weak: he's a prime candidate for a bluff squeeze to succeed (his hand is in the bottom 67% of his playing range).

A great stat to see would be how often they 3bet IP or OOP.  PT4 doesn't offer this stat, but you can get a good sense of what it is by what position they're doing the majority of 3Bets from.  If most are on the BTN and CO, then they like IP.  If they 3bet a lot from the SB then they don't really care about position or he likes to resteal a lot.  This guy seems to be doing most of it on the BTN, but it's not much more often than other positions.  I think he doesn't really 3bet bluff IP a lot, so his 3bet from any position is the practically same range.  Of course it's good to keep in mind that as the positions get later and later there's more chances to 3bet from them, so the stats are more reliable in on the BTN, SB and BB (45 instance, 71 and 90 respectively).

Versus this opponent I would probably 4bet any KK or AK and I'd flat with hands that I think could hit hard and crack his pretty tight range.

He obviously likes to do it from the BTN, but it is only 1 out of just 4 chances.  But it's still at least a little reliable.  He's probably just doing it with great value hands, but w/only 4 chances it's hard to say for sure, but that's how I'd treat a squeeze from him in any position.

Sometimes you'll encounter players who love to 3Bet vs the MP, or vs the BTN.  If you find a player like that, then you want to see the flop if you're in that position or come over the top to resteal as that's likely his intent.  The key to utilizing these stats here is to find discrepancies to exploit.  For this opponent, the vs CO stat seems to be an anomaly, but the other stats are all within just about 4 points of each other, so this is another indication that he just 3bets the same range from any position and against any position.  If I'm calling his 3Bet from the BTN, then I'm also calling from MP or the BB.

If you find an opponent has this stat too high, then you can flat them pre, then stick it to them post flop and get them off most hands.  Use the stat below this to help you gauge as well.  A high Cbet and high Fold Cbet to Raise is a perfect opponent to flat anything pre and raise or c/r them off of most flops.  This guy, at a 78% Cbet doesn't want to give you that 3bet pot, but his 100% fold Cbet to Raise stat says you can get him to do that, on the right boards at least.

Often against opponents like this one, if he's got AKs he'll 3Bet then Cbet any flop.  If you would shove pre, he'd definitely call you.  But on a flop like J23r or TT8, he's just giving up to flop aggression.  Flatting pre gives you another way to win a pot on the flop if his flop stats say he's got a weakness here.

You can also see his turn Cbet stat is 100% (but just 1 for 1 instance).  If you're going for value, just call the flop and give him the chance to fire the turn before you raise and go for additional value.

This, along with the Cbet stat above helps you determine how flop honest the guy is.  Look for high/high in these two numbers for someone to blow off their hand on the flop if you're bluffing.  If you want value, don't raise too much or not at all.

So many stats, so little space

With your HUD and pop-ups, you've got hundreds of stats to choose from.  Some are good for multiple situations and others are good for more detailed hand history analysis and review.  Experiment with different stats from week to week, take notes on your use of them, and determine which ones will benefit you at the tables and include those on your HUD and Pop-ups.

HUD and Pop-up space is at a premium, so be judicial in your choices and practice using them all constantly.  Focus on one Pop-up and one set of HUD stats each session.  This will help you gain utmost understanding of these and will put their use in your unconscious competence, making it so you can use these skills without even thinking about them.

Please let me know what stats I'm missing from my poker HUD in the comments below.  Let's work together to build up our skills.