Ready for a 16-question statistics quiz? I am… I love quizzes! 😍

Quizzes test my knowledge and at the same time they access my competitive side… Gimme that perfect 100%!

So, I make sure to thoroughly read each question and each answer so that I select the right one every time.

I just released a new Quiz for members of my online micro stakes training site, thePokerForge.com. The quiz is called “HUD Statistics Quiz 1” and it tests your knowledge of various preflop and post-flop HUD statistics. It's one of many quizzes in the HUD Mastery Course.

You don't even have to be a HUD user to ace this quiz. Just use a little critical thinking and put yourself inside each situation and against the types of players described. It will help you to translate any % into a real-world example. 84% is more than 8 out of 10 and 2% is really close to 0%.

Here's the deal: test your knowledge first by taking the quiz, THEN scroll further down to see the correct answers along with the strategies behind each one.

I hope you enjoyed the quiz.

You can retake the quiz as you go through the answers below to help you understand the correct answers and the strategies involved.

The Correct Answers with Explanations

1. VPIP stands for Voluntarily Put $ In the Pot. It's defined as the “Percentage of the time that a player voluntarily contributed money to the pot, given that he had a chance to do so.”

2. Loose with a 35% VPIP. If they play 35% of hands on average across all positions, their average range looks like this: 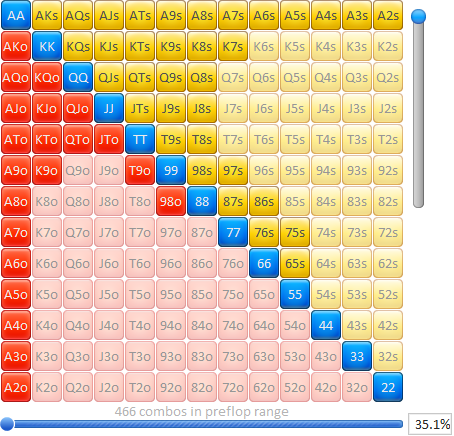 3. Isolate them with a range stronger (smaller) than theirs. This gives you an automatic mathematical edge against them.

4. 3bet Preflop means you someone makes a re-raise. So, the big blind is the first bet, then someone raises (2nd bet) then another person re-raises (the 3rd bet or 3bet).

6. Fold to Flop Cbet refers to situations where a player calls preflop, faces a cbet then folds. It is defined as “Percentage of the time that a player folds to a flop bet, given that the bettor was the last raiser preflop.”

8. Plan to double-barrel bluff players who call a lot on the flop only to fold on the turn (the increase in Fold to Cbet from the flop to the turn indicates this).

9. The BB is a great target because he calls on average 42% of the time. His calling range might look like this (maybe even wider because he's calling from the BB): 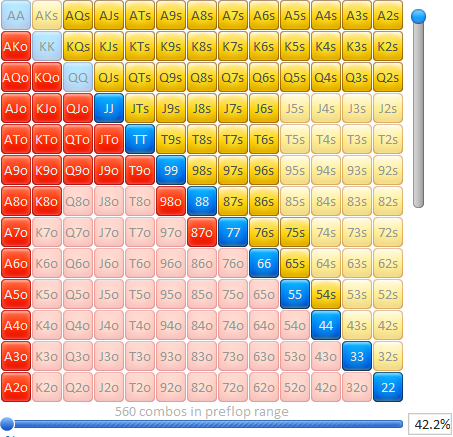 10. The SB is the player to watch out for before open-raising because “the 3bet is the bane of 2bets”. If you can see it coming by knowing who is capable of 3betting as a bluff, you can plan and react accordingly.

11. PFR stands for Preflop Raise. It's defined as “Percentage of the time that a player put in any raise preflop, given that he had the chance to do so.”

12. Raise First In in the CO over a good sample will indicate their range. This is exactly the stat you want to look at because it matches the situation exactly.

13. PF 3bet in the CO vs an EP Open matches the situation exactly, so it's the best stat to give you the idea of his range and if he's capable of bluffing (look for 3bet > 6%).

14. His Raise Cbet from out of position at 24% indicates a potential bluffer because most people only check-raise for value, so their stat might be only 5%.

15. AF or Aggression Factor is calculated by the total number of bets and raises divided by the number of calls. At an AF of 2, that player makes 2 bets or raises for every call they make (generally an aggressive player).

If the above statistical reads and exploits are intriguing to you, you must become a member of ThePokerForge.com. Click here to learn more and to join.