I will help you plan and execute float bets and probe bets. These are great post-flop bluffs when the time, and the opponent, is right.

How Often Do You Hit Flops?

The #1 reason players call preflop is because they have a hand they want to see the flop with. They hope to flop a pair or better, or a solid draw (open-ended straight draw or a flush draw). But if the only reason you call preflop is to hit something on the flop, you are NOT playing every hand to its fullest potential.

If we think about most calling hands, you only hit a pair or better plus a good draw around 30-35% of the time. 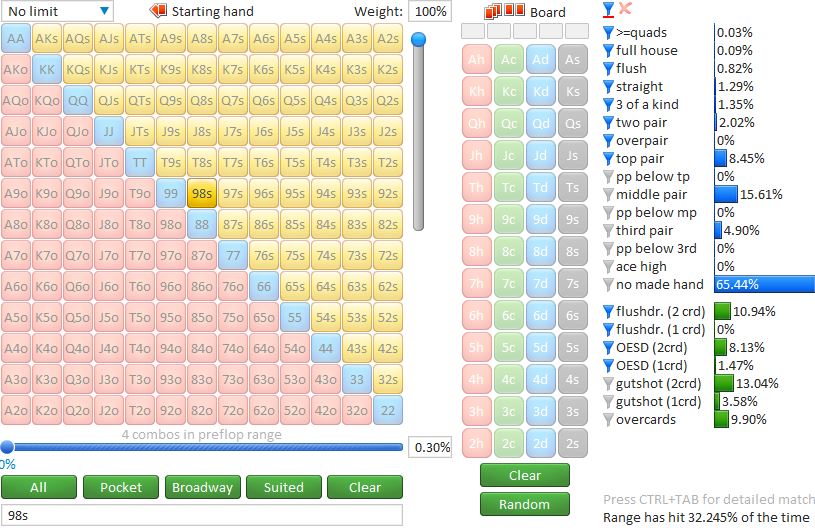 98s hits TP+, OESD or FD only 32% of the time. What does that mean for the post-flop situation you’re likely to face when calling with 98s preflop? Well, it means you’re missing the flop 68% of the time (more than 2/3 hands). 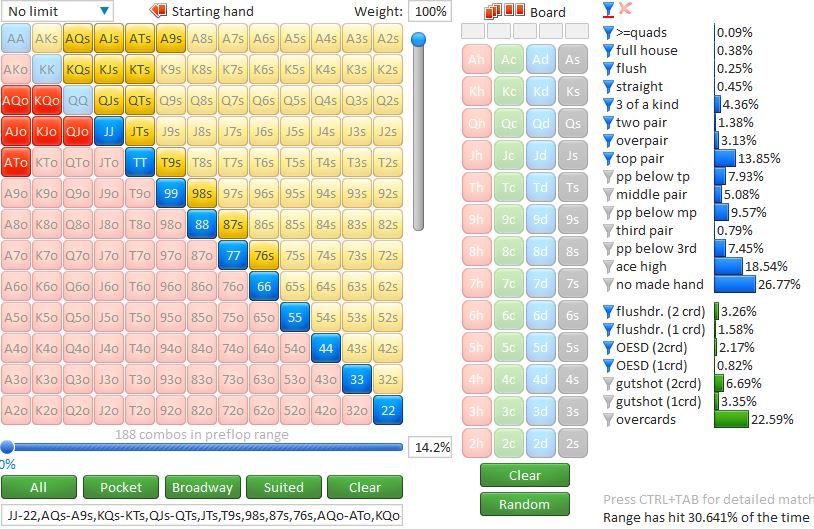 So, what you can do when you miss more than 2 out of every 3 flops as the preflop caller? Well, you have to figure out how to win the pot from the preflop raiser.

Two of my favorite plays for this are Float bets and Probe bets.

LIVE players think of the Float Bet as just calling with the plan of bluffing later. But, I’m an online player who uses PokerTracker 4, so my definition of Float Bet is taken from PT4:

A Float Bet is an IP bet when the pre-flop raiser checks instead of cbetting.

For example, the CO open-raised, you called with 98s on the BTN. The flop is T72, the raiser checks instead of cbets, and you take the pot down with an in position float bet.

Question: When should we make a float bet?

Answer: Most of the time. The pre-flop raiser showed weakness by checking to us. This is our time to shine! Normally, what would AA or KK do when OOP on the T72 board? They’d cbet, right? Their check = weak so we pounce on this with the aggressive float bet.

Now, when you make this float bet, you’re trying to get them to fold. You hold 98 on the T72, so you don’t have a value hand, just a draw. The float bet isn’t trying to build a pot in hopes you hit the straight later. Nope, you want to end the hand now.

Here are the reasons why this bluff is likely to work:

Now, let me help you become a more proactive player.

Remember that most calling hands and ranges miss the flop more than 2/3 of the time. So, before you call preflop, look at these 2 statistics in your opponents HUD. If you have the Smart HUD for PokerTracker 4, you’ll find them both in the Cbet Popup because they’re related to a player’s cbet tendencies.

A probe bet is basically the same as a float bet, except it’s made from OOP. PokerTracker 4 Definition of Probe Bet:

A Probe Bet is made OOP on the next street after the preflop raiser checks behind on the prior street.

For example, the CO open-raised, you called with 98s in the BB, so you’re OOP. The flop is T72, you check, then he checks behind instead of cbetting. So, you probe on the turn and take it down.

Question: When should we make a probe bet?

Answer: Most of the time. Preflop raisers with position would normally cbet for value with all overpairs, and they would cbet bluff with overcards like KJ and with any TP hand or draw. His IP check shows total weakness. You exploit this by betting on the next street.

So, you have one thing going against you: you’re OOP. But everything else lines up for a good bluff here.

Now, let me help you become a more proactive player.

Before calling with 98s preflop, even though it’s absolutely worth calling, plan now for missing the flop because you’re going to miss it 2/3 of the time!

So, look at these 2 statistics in your opponents HUD before calling OOP preflop:

The two examples above had you holding 98 on the T72 flop. You hit the OESD you wanted, right?

Are you just going to play your draw passively by checking after he checks?

Or, are you going to use aggression to bluff him off the hand right now, so you don’t even have to hit your draw?

If he checks to you on this flop, I recommend making a Float bet 100% of the time. He’s going to fold very often because his check is a big sign of weakness as already discussed. If he calls, that’s not all that bad. You might hit your straight on the turn and if you don’t, you can check-behind and see a free river.

Same thing with a probe on the turn. If a Ten or lower comes on the turn, make the probe bet. If he calls, you might still complete your draw on the river.

There are four PokerTracker 4 filters you can run, and they’re all under “Actions and Opportunities”:

Follow along with your PokerTracker 4 database as you watch me run these filters:

I recommend you run the filters above and 5 hands from each. Were your 5 floats and 5 probes good bets to make? Was your bet size big enough to get them to fold? What were your opponent’s statistics at the time?

Write your mistakes in your poker journal, then work to not repeat them in your next session.

Here’s my challenge to you for this episode:

In your next session, before every preflop call, plan for missing the flop. Look at their cbet related stats to see if they’re susceptible to floats and probes and if so, call now with the plan to bluff them when they show weakness by checking.

And, spend a session reviewing some floats and probes and the opportunities where you failed to make those plays.

J.K. purchased a copy of My Smart HUD.  Thanks for the support, and you’ve made a step towards improving your opponent reads.  Get your own copy here: https://www.smartpokerstudy.com/SmartHUD