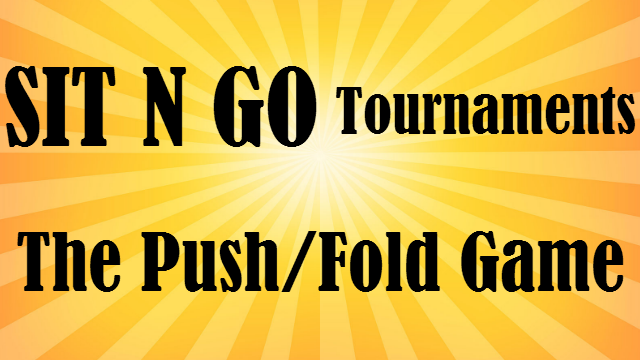 In the last Sit N Go article I discussed the role of ICM in SNG strategy.  Another key part of SNG strategy as the tourney moves on into the middle and late stages is the Push/Fold Game.

What is the Push/Fold Game?

Push/fold strategy boils down to limiting your choices to either pushing all-in or folding your hand.  This allows for maximum fold equity to pick-up the blinds and antes and makes it so you don’t commit some valuable chips pre-flop but then fold to post-flop pressure.  You also get the added benefit of nice double-ups when your opp’s call you with inferior hands.

When to start the Push/Fold Game

The push/fold game starts once you reach the 50/100 and the 75/150 levels.  Here, the 1,500 starting stack is only 10-15bb’s, and this is where many SNG players start their push/fold game.  Everything you’ve learned up to this point has been geared to get you to this profitable spot.  It’s profitable because your opponents call shoves too wide or don’t shove wide enough to pick-up the super important blinds and antes.

Pay attention to all showdowns and take note on your opponents regarding when they start their push/fold game and what they push with.  Some begin early at sub-15bb’s.  Others start super late at 7bb’s, and some never do it.  Noting when they tend to push/fold will alert you to any changes in behavior, which could indicate hand strength.  If you know that “9bb Norman” always pushes at 9bb’s or less, but suddenly at 7bb’s he min-opens, there’s a chance he’s got a nut hand and wants action.  You can play him accordingly and give his unusual play the respect it deserves and fold out all but the best pre-flop hands.

(Of course, smart players can use this against you, so make note if you ever catch someone using a reverse tell like this.)

Why Use the Push/Fold Strategy

This is all about maximizing fold equity.  When the blinds/antes are a big portion of your stack, you’ve got to do all you can to collect them.

Pushing all-in maximizes your fold equity as only the strongest hands (or weakest players) will call for a big part of their stack, so we’ll be folding out most hands that would contend with a smaller raise of 2-3bb’s.

Another benefit of pushing all-in instead of making a smaller opening raise is that it doesn’t give our opponent the chance to re-raise all-in to put the pressure back on us.  By shoving, we’ve put max pressure on our opponents and now the “ball’s in their court” as the saying goes.

Learning From Your Push/Fold Opportunities

As an SNG player, you’ll encounter the bubble and push/fold situations more times than you can shake a stick at.

As you play, tag hands where you have a push/fold decision and analyze them later in your HH review sessions.  Use an ICM calculator (like ICMIZER or SNG EGT as discussed in the Middle-Stage SNG post).  As you assign ranges to your opponents, make their ranges a little tighter when calculating their all-in shoves and wider when calculating their calling ranges.  Being a bit more conservative on both fronts will slightly tighten you up, making your all-in ranges stronger.

The more you study these push/fold spots, the better innate understanding you’ll have of them which will help with profitable in-game decisions.

I mention using Push/Fold charts in the SNG Middle-Stage article, so please check that out, but I’ll make a quick mention of it here.

I used them in the past, but I found them to be a crutch and I would follow them overly-strictly and not even rely on opponent reads or the current game dynamic.  I do recommend trying them, though, as many SNG players swear by them.  Google “push fold charts” and try some for yourself.

The Push/Fold game isn’t something that anybody gets right off the bat.  It takes time on and off the felt to work on this part of your game.  Drop in stakes if you have to in order to get comfortable with shoving at around 10bb’s if you don’t yet do this.  Tag hands and analyze them later, take notes on what you’ve learned, and put these into play in your next session.

Until next time, study smart, play much and make your next session the best one yet!