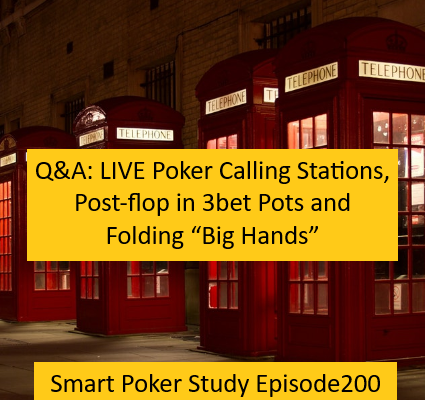 In episode 199, I helped you plug the leak of straying outside of profitable preflop 2bet ranges.

Q: I have problems with LIVE poker.  There are so many fish, but they don’t fold to 3bet or at least 4 people call a big raise of 8bb’s.  So, is my only choice to be a Nit?  I squeeze sometimes if there are too many limpers, but that’s it.

Now you might say, the only value open-raising hands are pp’s.  Not necessarily.  If you’re considering a raise in the CO with KJs for example, that’s not necessarily for value.  But, if you know the BTN, SB and BB can all call with weaker Kings Like KTs-K2s, weaker Queens like QJs or below and weaker Tens even like T9 and T8, then you can open raise.

Your first plan when raising here would be to steal the blinds, but if you get a caller or 2, then you’ll have to make new plans for the flop, turn and river.  If the BB is the only caller, then you can plan to cbet the flop as a bluff, then barrel on turn cards that add equity.  You can also plan to value bet the f/t/r if you hit a TP hand and you believe they can call you down with worse.

If value open raising or 3betting, size it big enough to get 1-2 callers at most.  If everyone’s calling 4bb open raises, then experiment with 5bb’s or more in order to find the size that limits the callers.  AA is a favorite versus 5 players, but it’s a bigger favorite against 1-2 players and you have less post-flop land mines to dodge.  Plus, if you make it 10bb’s to go and 2 people call, the pot is at 30bb’s.  This is bigger than 4bb’s with 5 callers.

If you really want to bluff 3bet or bluff open-raise, make your sizing bigger.  If 8bb’s as a 3bet doesn’t work, then you must go bigger.  Your goal is to get them to fold, and if they ain’t folding, then you made a bad bet.  See, your opponents will only fold if you hit their “pain threshold” or higher.  If that’s 10-12bb’s, then that’s what you’ve got to do.

Q: Post-flop play in three bet pots is my number one source of frustration in poker.

For the most part, post-flop in 3bet pots are the same as in 2bet pots.  You have to think about your opponent’s range, their post-flop tendencies and the board you’re both facing.  But, there are 3 things that set these apart from 2bet pots.

Do a ton of hand reading practice in 3bet pots.  Utilize PT4 and a database of hands or hands you’ve taken notes on, you can really start doing this.

Get practice in 3bet pots by trying to make more 3bets in position from the CO and the BTN.  This will give you practice with playing 3bet pots, and you’ll have initiative as well as position to make your post-flop decisions a bit easier.  If you want to practice being the caller in 3bet pots, that’s fine to do as well.  But, look for good situations to put yourself in, and call with hands that could be ahead of their 3bet range.  If you’re calling a 3bet, fold the T8s CO opens versus a 3bet.  But, when opening with AJs against a 3bet from someone who has 3bet worse Aces and worse suited hands before, make the call because you’re ahead of parts of their 3betting range.

You’re facing lots of short-stackers in the micros, and a 3bet pot can easily make them feel “pot committed”.  A 40bb stack after putting in 10bb’s preflop has only a 1.5 SPR (20 in pot, 30 behind).  If they hit anything decent, they’re likely committed so keep this in mind before you bet or call post-flop.

Pay attention to your opponent’s stack size before you make or call the 3bet preflop.  Prepare yourself for the SPR you can expect in this 3bet pot.

In low SPR situations, know that there’s a good chance you can get your full stack in by the river in 3bet pots.  Is your hand worth that much?  Can your opponent put in the same amount of chips with a worse hand?

Don’t be overly sticky to 3bet pots.  They’re worth fighting for, but they’re not worth putting money in bad.  If you’ve got AcAd and 2 players called, and the flop comes down JsTs9s, then you should try to get to SD as cheaply as possible.  You might have the best hand now, but your opponent’s have so many sets and 2p and fd and sd’s in their ranges that you’re going to be lucky to win it, especially if lots of post-flop chips go into the pot.

Beware of opponents who are overly sticky to 3bet pots, and also look for opponents who don’t mind folding.  Beware of the sticky, and bluff the foldy ones.

Facing too many calls

Sometimes your value 3bets are getting called by too many players, like you 3bet with AA and the SB and BB cold call and the original raiser calls as well.  When this happens, make your 3bets bigger.  No matter what, make every 3bet 9bb’s or more.  When IP, 9bb is okay.  OOP, make it 10-12bb’s.  If you start getting too many callers, make them for 12-16+ bb’s.  Price it at a point where you’ll get just one caller at most, whether you’re bluffing or value 3betting.  One player is easier to read, easier to get value from and easier to bluff.

If you’ve got players in the blinds who love cold calling 3bets, do so only for value and choose a size that they’d be foolish to call.  Hopefully they do and you’ll make tons of money from these calling stations with your best hands.

Q: Need help with staying in too long on big hands and getting caught with opponent having straights in low limit games.

I have that same problem with big pp’s or big pairs on the flop (like AK on K72r board).  Sometimes $$$ flash in my eyes when it looks like I have an incredibly strong hand on a board.  I have to tell myself to just play it one street at a time.  The plan is to put my opponent on a range and make good decisions based on the board, my opponent, their actions and future board runouts.

I know that one issue many players have is cbetting the flop and turn, then calling their opponent’s big bet when the draw completes on the river.  You have to keep in mind that bets and raises on the turn and river are signs of strength most of the time.  That doesn’t mean just fold to every turn or river bet or raise, it’s just that it’s most of the time for value.  Especially at $1/$2 LIVE or microstakes and low stakes online games.  Unless you’ve seen your opponent bluff raise or bluff bet on the turn and river before, start with the assumption that they’re doing it for value.

When you’re facing what you think is a value bet, ask yourself this question: “Do I beat some of the value hands my opponent can be making this play with?”  If the answer is yes, calling isn’t a bad option.

For example, you turn a Jack-high flush (Jc7c) and bet then get called.  The river comes a fourth card in that suit, and your opponent leads out.  They’re normally doing this because they want value.  But, if they could be betting with the Ten, 9 or 8 (even the 6) of that suit, and you’re only losing to the King (like the board is Ac7sQc5c2c) then calling isn’t a bad play (raising would be bad though).  If they use a bet sizing that indicates only having a King or you know the opponent is a very river honest player, then you could easily fold here (because they’d likely just check-call with weaker flushes).

I don’t know if you play online or not, but I recommend that you do some hand reading practice.  You actually don’t need to play online, just record hands where you lost unexpectedly or look in forums for such hands.  As you’re hand reading your opponent’s hand, assign them a preflop range then narrow that range through the streets.

This hand reading practice will go a long way to making you a better player.  I credit my 66 Days of Hand Reading (www.smartpokerstudy.com/66daysofhandreading) with vast improvements in my game.

Here’s my challenge to you for this episode:   Start sizing your 2bets and 3bets bigger in order to limit the callers to 2 at most.  Too many players stick with the same sizing no matter the opponents they’re up against.  If your 3bb open raises routinely get 3-4 callers, start jacking up the price on that stationy table.  If they’re willing to pay 3bb’s with inferior hands like 96s, they’re making bigger mistakes when they call 4, 5, 6 or even 9bb’s.

Jim Garguilo left a great 5 star Amazon Review for my first book How to Study Poker Volume 1.  I love 5 star reviews, and if you leave one for volume 1 or HTSP Volume 2 or my latest book Preflop Online Poker, please let me know so I can give you a shout-out on the podcast.  I totally appreciate it, Jim!

I also have my own skin on the Shair My Pair poker hand app.  Please set my SPS group as your group in the settings.

If you’d like coaching, please contact me via email and we’ll discuss how I can help you improve your game.

In episode 201, I’ll hit you with 3 more questions from my hopper of helpful questions.