I simplify the Top 10 poker HUD stats by telling you the 3 things you MUST know about each.

In episode 203, I discussed how recording and reviewing poker play sessions is the #1 strategy that you MUST employ.

This episode is inspired by a quote from Albert Einstein:

My goal today is to simplify the Top 10 HUD Stats so you can get more out of your HUD starting with your next session tonight.  But we must begin with the type of number HUD stats present to you… percentages.

You can be dealt 1,326 starting hand combos in NLHE.  The stats that relate to this whole number are VPIP, PFR, Raise First In, 3bet and Fold to Steal.

Let’s look at the 10% range in relation to the Raise First In statistic: 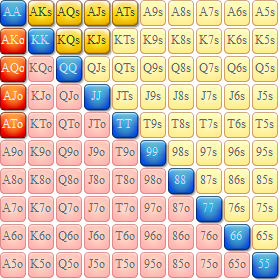 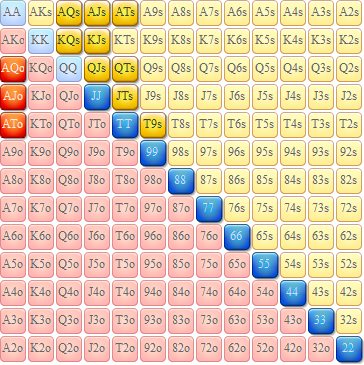 Both ranges above were 10% and 132 combos, but the cards within each vary based on the preflop action taken.

2. The Number of Total Opportunities Presented

The other “whole” used for HUD stat percentages are the total opportunities present. These are stats like Fold to 3bet, Cbet and Fold to Cbet.

Let’s look at the Cbet stat.  A Cbet of 70% means they cbet 70 times out of every 100 opportunities.  It’s important to note that most ranges hit the flop with a TP+ and a good draw about 35% of the time.  So, if somebody is cbetting at 70%, half of the time they are cbetting with worse than TP, weak draws and complete bluffs.

Before you draw this conclusion with everyone who cbets at 70%, it’s important to consider how frequently they have the opportunity to cbet.

Somebody raising only 10% of hands preflop gets to the flop less often but with a stronger range of hands.  The 10% range flops TP+ and good draws about 40% of the time.  If they cbet at 70%, more than half of their cbetting hands are TP+ and good draws.

Conversely, somebody who plays 50% of hands flops TP+ and good draws only 29% of the time.  If they cbet at 70%, more than half of the time they’re doing it with weaker hands and draws.

Here’s a rule of thumb for HUD stats: the higher the percentage, the weaker their range.

Another way to look at this is you should be more inclined to believe the person with the smaller range.

Here’s a question for you: How do you know a stat percentage is reliable?

As you gain experience using stats to exploit your opponents, you’ll begin to gain a sense of when to rely on a stat and when to ignore it.

The Get More From PokerTracker 4 Course will teach you how to study HUD stats:

Here are a few guidelines I gave myself for simplifying the stats:

So, this is geared towards people familiar with HUD Stats, but they might not know HOW to use all the stats HUD.

The 10 stats are broken up between 6 preflop and 4 post-flop.

#1: VPIP or Voluntarily Put Money in the Pot

Where’s the Attempt to Steal Stat?

Observant listeners might have noticed that I left out the Attempt to Steal stat.  It’s not a necessary stat because this is the same as RFI from the CO, BTN and SB.  You should have these in a popup, so there’s no need for ATS.

Here’s my challenge to you for this episode:  Pick one stat that you’re not at all comfortable with and practice using it to exploit your opponents in your next session.  Keep in mind the 3 pieces of info I gave you on each stat, and do some research on your own to learn more about it.  The research and learning are easy.  The tough part will come from putting your knowledge into action and using the stat to exploit opponents.  But, the only way you’ll learn how is by doing it.  So, do it!

Jeremy Thiam purchased the PokerTracker 4 Smart HUD and I’m sure today’s episode will help him out in his pursuit of player exploitation. Along with the HUD, I sent him some bonus videos to help him get more from it and PT4.  Click here to get the Smart HUD.

Guy Brooks purchased a webinar I did with Mark Warner of ExceptionalPoker.com called “Poker Mathematics Webinar”.  We got tons of great feedback from this one, and if you’re looking to bone-up on your poker math, click here to get $5 off the webinar.