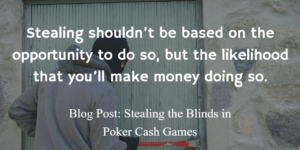 Stealing the blinds is defined as raising pre-flop from the Cutoff, Button or the Small Blind in an attempt to collect the blinds.

Stealing the blinds in cash games might seem like a wasted endeavor.  We’re often playing 100bb+ stacks, and the blinds only represent at most 1.5% of our stack.  It’s not like a tourney, where the blinds and antes are constantly increasing, making stealing an integral part of maintaining your stack.

But I’d argue that there are lots of reasons to steal the blinds in cash games:

Stealing the Blinds in Cash Games

Who are likely steal targets?

What stats to have in your HUD?

Stealing shouldn’t be based on the opportunity to do so, but the likelihood that you’ll make money doing so.

Stealing starts pre-flop, but doesn’t end there.  The range of cards you decide to steal with will help to inform your post-flop decisions when  it comes to bluffing down the streets.

It shouldn’t be done every orbit as the blinds will wise up to your shenanigans and fight back eventually.  You should base your steal attempts on your opponent’s tendencies both pre and post-flop.  If he’ll fold a ton to bets down the streets, then it’s more likely to be profitable.  If he’s a sticky station, then you may want to forgo that steal and wait for a value hand.

The Maths of Stealing the Blinds

How often does your steal have to work to break-even?  That Question is answered by the Break-even % formula:

For example, how often does a 3bb open from the BTN have to work?

So if the blinds fold more than 67%, our steal is a profitable one.

How do we know how often the blinds will fold?  This is answered by combining probabilities.

If the Small Blind folds 80% vs steals, and the Big Blind folds 70%, we just multiply them together to find how often they fold together:

So, a 3bb steal vs these two opponents needs to work 67% of the time to break-even, but they fold only 56% of the time >>> so it’s not an immediately profitable spot (not taking into account post-flop weaknesses or your hand vs their range of calling hands).

Defending Against the Blind Steal

Just like you shouldn’t steal every orbit, don’t defend against every blind steal.  The opponent and his tendencies pre and post, the amount he’s charging and your cards all play a part in your choice to defend or not.

Choose your opp’s and your hands wisely, and defend when it seems profitable to do so.  Does he only cbet when he hits?  Does he ckb  when he whiffs so you can steal w/ a delayed turn donk bet?  Does he steal so much that he’s likely on a very weak range and will have to fold most of the time to 3bets?

*Remember: the blind money you post isn’t yours any more, it belongs to the pot.  Don’t defend out of some notion that he’s trying to steal your money.  Only get involved if it seems profitable to do so.  Re-raising the more aggressive opponents occasionally will make them think twice about stealing your blinds again, effectively derailing this strategy.

Until next time, study smart, play hard and make your next session the best one yet!