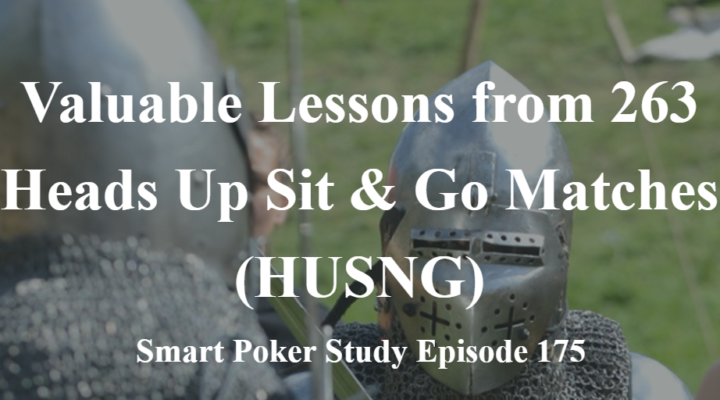 I discuss the valuable lessons I learned from playing a full month of HUSNG matches including play the player and staying aggressive.

In episode 174, I interviewed poker coach and author Peter “Carroters” Clarke, author of ‘The Grinders Manual’ and ‘100 Hands’.

I started as an MTT and SNG player.  I loved this form of poker, but moved to cash games because I think they’re more profitable for me.  But, I still love them.

There was a time when I struggled with SNG’s and I found myself coming in 2nd and 3rd place too often.  All the money in SNG’s is up top in first place.  Min-cashing isn’t that profitable.

I wanted to improve my SNG results and I was tired of losing when it came to HU play.  So, I figured I’d work on this by playing 100 HUSNG’s.  This seemed like it would be the quickest way to improve my HU skills.  And it worked as my win rate started to gradually inch up.

A few months ago in November, I felt that my cash game play was becoming too robotic.  I was making decisions based on my cards and my position more than on the opponent I was up against.  I wasn’t exploiting my opponents post-flop like I should have.  It was like I viewed every opponent the same and I was making “standard” plays over and over.

I knew what my issue was and I figured going through another HUSNG Challenge would really help.  It would force me to play the player over and over again.  My plan was to play 100 HUSNG matches, but I far exceeded that with 263 matches.

Calculating the break-even point: BE% = entry fee / $ amt to win.

I played many more hyper turbos than the other formats because the value was better. I can play more matches in one day and I pay less rake per match.  If I ever become a HUSNG expert, I would probably stick to hypers.

This challenge forced me to pay attention to the opponent I was up against.

If they were passive and calling everything, I would only build the pot pre-flop with strong hands, and would keep my bluffs to a minimum post-flop. If my opponent was foldy, then I would open wider, 3bet bluff a bit more frequently, and I would throw out plenty of cbet bluffs and bet when they checked post-flop.

Since completing this challenge, I’m playing the player more often, and my January and February cash game play is much improved.

Stay Aggressive Until They Fight Back

Poker is a game of aggression because aggression collects chips. It’s a great strategy in HUSNG’s to play aggressively until your opponent fights back.  If they keep limping then folding pre-flop… keep raising. If they continually fold to cbets, keep cbet bluffing (but check behind when you have a value hand).

If they fight back against your aggression, then tighten up. Choose stronger, more narrow ranges pre-flop, and make most of your cbet’s for value as opposed to bluffs.

There’s no place more profitable to do opposite of your opponent than in HUSNG’s. I’ve always said don’t fight fire with fire. If your table is full of nits, don’t nit it up along with them.  Instead, get loose and start stealing more and pushing them off their hands. If your table is full of maniacs, tighten up and strictly go for value.  If everyone’s a TAG, get slightly more aggressive than they are. 3bet them a lot with position in the CO and the BTN, and also do a lot more calling from there as well. Basically, be looser IP.

All the HUSNG matches I played taught me the value of remaining aggressive as long as your opponent lets you.

It’s critical to keep your cool in HUSNG’s.  There’s no quicker way to get angry and go on tilt when you lose hand after hand to a weaker opponent.

I experienced this over and over.

My tendency towards revenge tilt and entitlement tilt were a problem early on.  For me, it was worse at regular speeds and turbo speeds.  The longer tournaments went on vs weak players, the more likely I was to get frustrated that I hadn’t beat this fish yet. In regular speed matches, the action is so slow and mistakes made at the lower blind levels don’t cost you the match so often.  In turbos and HT’s, your opponent’s mistakes happen more frequently and cost them more.

Try to keep your cool and wait for your opponent to make a mistake.

Position is an incredible advantage in poker, and it’s critical in HUSNG’s.  Just try pulling off a few OOP bluffs against competent players.  LAG’s and LP players make bluffing OOP post-flop extremely difficult. In general, you should be running way fewer bluffs OOP, especially versus opponents who are not going to fold. HUSNG matches see the flop, the turn and the river so often, especially in the early levels. You must make good pre-flop decisions when you know you’ll be OOP post-flop.

One of the most useful tells I saw was bet sizing. Far too many players make a minbet when bluffing while simultaneously betting 2/3 to 3/4 pot with their value hands. It’s like they’re trying to win the tournament right now with their TP or 2p or set.

Here’s a great study method after playing 2 or 3 matches with one opponent: go through their SD hands and see the bet sizing they use.  Also look at their bet/fold hands.  Take note on their bet sizing and look for patterns to exploit in your next match with them.

All this HUSNG play and study helped to solidify an important poker maxim:

For HUSNG players, the short-stacked game must be studied.  You’ll often find yourself below 20 BB’s versus a patient opponent.  When this happens, it’s easy to get to sub 10 BB play. Get comfortable with using push fold charts and with calling all-in shoves. I recommend Jonathan Little’s Float the Turn Push/Fold App. It’s been updated to include all-in calling ranges as well as the push/fold charts.  Have the app open on your phone as you play your matches. The more you use it more, the more comfortable you’ll become and the optimal hands will start to become ingrained in your game.  It’s going to take some practice and off the felt study to become comfortable with short-stacked play.

For SNG and MTT players:

About the tracker (get it by signing-up for the Weekly Boost above):

I may end up doing this challenge again in the future.  Three changes I would make:

Here’s my challenge to you for this episode:  Take up your own HUSNG Challenge.  Try it out for just 30 matches.  You can do this in a couple days easy, especially with the less costly hyper turbo format.  Download and use the tracker (above) and let me know how it goes.

Cody T picked up PokerTracker 4 through me.  This is fabulous and good luck with using the Smart HUD and learning from your hands, Cody.  I also sent him my Smart HUD in thanks for his support.  Get PokerTracker 4 here.

Nathan Siegrist is about to take down the micro stakes world.  He purchased my Mashing the Micros Webinar.  Study hard, Nathan!  Pick up your own copy of the webinar here.